At last the answer to our high gas prices: Joe Biden Addresses High Gas Prices: Americans Can Save Money if They Buy Electric Cars

President Joe Biden promoted his efforts to lower gas prices on Tuesday, but he reminded Americans they would save more money on gas if they owned electric cars.

“For the hundreds of thousands of folks who bought one of those electric cars, they’re going to save $800 to $1000 in fuel costs this year,” Biden said, referring to the $112,595 electric Hummer pickup he test drove at a General Motors factory in Detroit earlier this month.

The president appeared frustrated that some Americans continue blaming his environmental agenda for higher gas prices, dismissing it as a “myth.”

“My effort to combat climate change is not raising the price of gas, what it’s doing is increasing the availability of jobs,” Biden insisted.

He claimed his government subsidies for green energy and electric cars would only help Americans get jobs and save more money.

“Let’s do that. Let’s beat climate change. With more extensive innovation and opportunities,” Biden said, claiming the economy would be “less vulnerable to these kinds of price hikes” on fossil fuels.

The president notably suspended all federal leases on oil and gas and shut down the Keystone XL pipeline after taking office, which hurt the amount of domestic oil production.

Biden still has no plan to increase the domestic production of oil, but he frequently complains that OPEC+ nations are not releasing enough oil to the world.

The president has also resisted leveling an export ban of oil from the United States or loosening blending regulations and standards to alleviate the cost of production.

Biden announced plans to release 50 million gallons of oil from the Strategic Oil Reserves to help lower prices but cautioned Americans it would take a while to have an effect on gas prices.

“While our combined actions will not solve the problem of high gas prices overnight, it will make a difference,” he said. It will take time, but before long, you should see the price of gas drop where you fill up your tank.”

Biden’s efforts did not immediately have the desired effect on the oil market as prices rose over three percent per barrel on Tuesday morning after his announcement.

“The big part of the reason Americans are facing high gas prices is because oil producing countries and large companies have not ramped up the supply of oil quickly enough to meet the demand. And the smaller supply means higher prices globally. Globally for oil. To address these issues, I got on the phone with leaders from other countries grappling with this challenge."

Just to repeat, because “The big part of the reason Americans are facing high gas prices is because oil producing countries and large companies have not ramped up the supply of oil quickly enough to meet the demand.”

Now, you know what folks? President Biden is absolutely right. There’s not enough oil production. Oil supplies are too low in relation to rising oil demand. But there’s one thing he forgot: America has oil. Lots of it. Pre-pandemic, we were producing more than 13 million barrels per day.

President Biden spoke today, selling his new idea of putting on the market 50 million barrels of oil from the strategic petroleum reserve. That will cover about three days' worth of oil consumption. Plus, some kind of international consortium of

Lou knew how many barrels we use every day… OUR ENERGY SECRETARY DIDNT HAVE A CLUE!

What happened since Trump? We were damn near energy self sufficiant. Now look at us.

It’s easily found on the internet.

The market was unimpressed. Perhaps traders were expecting a bigger release from the U.S. Or perhaps they were underwhelmed by the releases planned by the likes of Japan, Britain, and India. Whatever the cause, the price of oil rose by more than three percent on Tuesday, exactly the opposite of what was intended.

Most importantly, the global market understands that OPEC is very much still in the driver’s seat when it comes to oil prices. U.S. production and rig counts are still well below the pre-pandemic levels. With the Biden administration’s policies and rhetoric aimed at discouraging investment in fossil fuel exploration and extraction—with the promise of even worse to come, perhaps in the form of the Federal Reserve pushing banks against taking "climate risk” investments—there’s little chance of U.S. supply recovering. Who is going to invest new money in rigs when you can get subsidized returns by investing in electric fuel stations?

Those same policies also disincline the rest of the world’s oil producers from increasing production to boost the U.S. economy. Why should the Saudis do us any favors when our ruling party has promised to eliminate the Kingdom’s source of national wealth? The optimal strategy now is to extract as much wealth from the world, in the form of high prices, for as long as possible.

Perhaps out of frustration with the market refusing to take orders, President Biden later on Tuesday said he was instructing the Federal Trade Commission to investigate whether high gasoline prices were being caused by “illegal and potentially anticompetitive” behavior by “gas supply companies.” He even had the nerve to complain that oil-producing nations had not increased supply to meet global demand. Apparently, no one in the White House bothered to tell the president that the U.S. is the biggest laggard in this regard, with 45 percent fewer operating oil rigs today than pre-pandemic.

I can’t get over this
SHES THE ENERGY SECRETARY !! 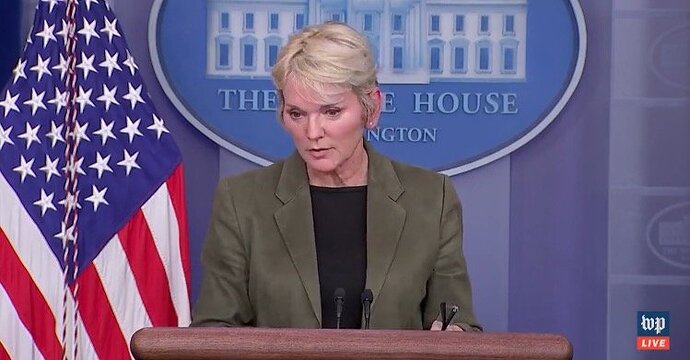 Biden's Secretary of Energy Has No Idea How Many Barrels of Oil US Consumes...

How does this woman still have a job? Joe Biden’s Secretary of Energy Jennifer Granholm on Tuesday said she has no idea how many barrels of oil the US consumes a day. Biden announced the release of 50 million barrels of emergency oil from...

She’s the ex- governor of Michigan who trashed their state and Canadian to boot.

Nothing surprises me about her.

A123 Systems: This Ann Arbor electric car battery manufacturer was heavily touted by Granholm and then-president Obama, with promises of hundreds and thousands of jobs. Despite receiving hundreds of millions of state and federal dollars, A123 went bankrupt and has abandoned manufacturing batteries in Michigan. A Chinese company bought A123 for pennies and assumed all of the money outstanding from the state and Federal Government and left town laughing.
Mascoma: The Upper Peninsula project was supposed to convert biomass into ethanol. Instead, it turned tax dollars into nothing. The Granholm administration awarded it a $20 million grant and the federal energy department approved up to $100 million. The company’s intellectual property was sold off and the plant was never built.

Wixom: The shuttered Ford plant was supposed to get new life as a $725 million renewable energy park. Granholm said it would be “symbolic for Michigan in what we’re going to become.” Let’s hope not. The state approved a $100 million credit for a promised 4,000 news jobs. The energy park idea was scrapped two years later and the land was repurposed for another, more successful, project.

Solar sore spots: Touting taxpayer investments in solar energy companies, Granholm said “Michigan would lead the green revolution.” The $250 million Saginaw-area project from Suniva pledged 500 jobs, but they didn’t materialize. United Solar Ovonics cashed in on state and federal subsidies with a pledge of more than 1,000 jobs; its parts were sold off in 2012. Evergreen Solar went bankrupt. GlobalWatt, approved for $42 million, also shut down.

Perhaps the greatest embarrassment of the Granholm era was the “RASCO fiasco.” The governor appeared at a press conference with Richard Short to promote $9 million in tax credits to create jobs in Flint through his “cutting-edge” company. One problem: Short’s parole officer saw the press conference and alerted the state that he was a convicted embezzler with a “history of scams.” He was living in a borrowed trailer when he was approved for state tax credits. Short ultimately went back to prison.

This is the record of the “green leader” who Biden has tapped to head the U.S. Department of Energy. Michigan taxpayers are still paying for the billions of dollars she wasted during her time in office.

The regressive left reign in Michigan.

Like many states the cities are regressive and the rest of the state conservative.