A school district with its own police force? This is not only insane but extremely problematic in many ways. Of course the main issue here is about Parents being targeted for wanting to speak out at school board meetings and so far with this latest arrest, it seems that things are starting to escalate between people who perceive themselves as the ones with power and the regular people who want to have a say when it comes to school related matters such as the teaching of CRT and mask mandates. Will scenes like this become common occurrence as Federal, State and local officials become more and more totalitarian in how they decide to handle parents concern by violating their rights? It sure seems that way, but schools now having their own police force and having the authority to arrest parents at their home might be a bridge too far and thus a powder keg that is ready to be fused and lit is the trajectory we maybe on if this type of thing is tolerated within our society especially when Tax payers are footing the bill and are prevented from having a say in educational matters. 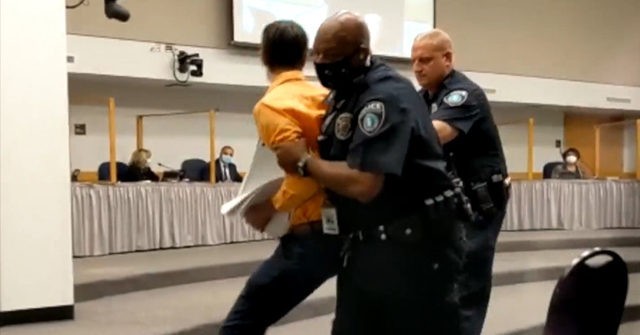 A Texas school district is using its own armed agents to arrest parents who speak out against the school board's policies.

The Round Rock Independent School District (RRISD) in Texas is using its own armed agents to arrest parents who speak out against the school board’s policies, according to Christopher Rufo in the City Journal .

Rufo, a senior fellow at the Manhattan Institute, said:

The battle lines are clear: on one side, the Biden administration, public school bureaucrats, and their armed agents; on the other, parents and families who oppose school closures, mask mandates, critical race theory and corruption. Public school officials have demonstrated a willingness to use police power to silence and intimidate their opponents.

. Will scenes like this become common occurrence as Federal, State and local officials become more and more totalitarian in how they decide to handle parents concern by violating their rights?

YES ! Until we elect officials that have taxpayers concerns at the forefront . If the dems control the house and senate in 2022 we are doomed !

It does start on the local level and like all communist regimes that is where they focus the most resources on. If Republicans and conservatives alike were smart enough the playbook is predictable, they just seem to be always one step behind. Maybe on purpose? Who knows, however things are going to get out of control pretty quickly if this shit is not challenged. Fix the elections first!