Sen. Kyrsten Sinema is facing a censure vote from the Arizona Democratic Party, brought by progressives who deem her politics too accommodating to President Donald Trump at the expense of Democratic values.

Sinema, D-Ariz., built a moderate political brand during her three terms in the House of Representatives, which has extended to her early days in the Senate. According to the FiveThirtyEight Trump Tracker, she has opposed Trump while in the Senate 81% of the time. In the House, she supported Trump’s agenda 54% of the time.

While Sinema’s political centrism has earned her Republican support, it has grated on progressives — some of whom silently protested her during a state fundraising dinner in downtown Phoenix. Democratic state committeemen will consider the resolution on Saturday, at the Arizona Democratic Party’s quarterly meeting.

They cite in particular her vote to confirm Trump’s nominee, David Bernhardt, to serve as secretary of the Interior, and her vote to confirm William Barr as U.S. attorney general. They also cited her resistance to join Democrats in trying to reinstate “net-neutrality” rules to prevent internet providers from throttling any websites. The Progressive Caucus of the Arizona Democratic Party is bringing the resolution.

Dan O’Neal, the state coordinator for Progressive Democrats of America, told The Arizona Republic the censure is intended to encourage Sinema to move back toward the left, where her political career began.

“Here’s the thing: We really support Kyrsten Sinema, we want her to succeed, we want her to be the best senator in the country,” O’Neal said. “But the way she is voting is really disappointing. We want Democrats to vote like Democrats and not Republicans.

In past interviews, Sinema has brushed aside calls that she is insufficiently partisan and that she should speak out against Trump’s more inflammatory comments or policies.

“As everyone knows, I am 100% focused on the needs of everyday Arizonans, and I refuse to be distracted by the pettiness and the partisanship that has invaded Washington," she said during a July interview. “… I promised Arizonans that I would never be a part of that typical Washington chaos and drama and I’m going to continue to stay focused, just like a laser, on the stuff that actually matters to the people in their everyday lives.”

Hostility to Sinema’s voting record within her own party echoes the pushback the late Sen. John McCain, R-Ariz., faced from grassroots Republicans within Arizona.

The Arizona Republican Party censured him in 2014, largely over his work on immigration reform. A conservative faction of the party opposed an attempt to rebuke him two years later.

Felecia Rotellini, Arizona Democratic Party chairwoman, said the censure will be heard and discussed. She is uncertain if it will pass. 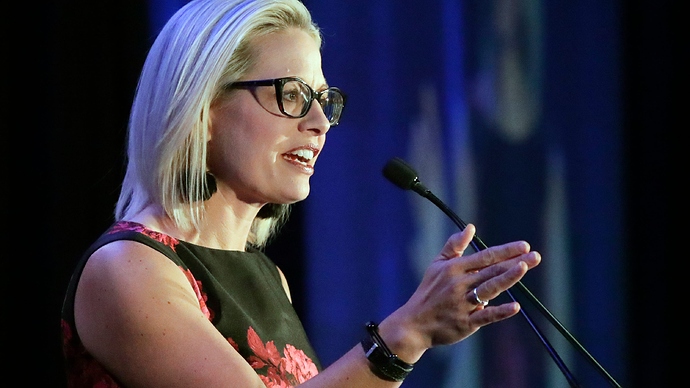 While Sen. Kyrsten Sinema’s political brand has earned her GOP support, it has grated on progressives. It is unclear if the censure will advance.

A collective tantrum and abuse of office.