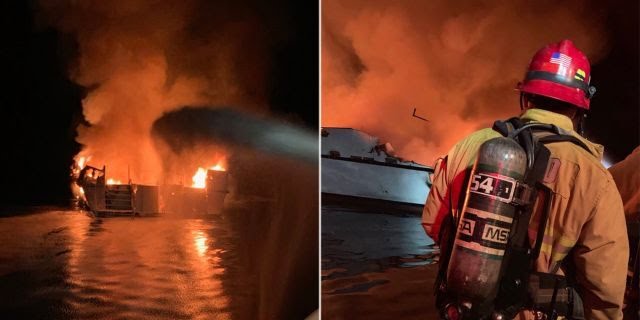 Fox affiliate KTTV earlier confirmed there were nearly three dozen fatalities, but Coast Guard Lt. Cmdr Matthew Kroll told Fox News the 34 people were unaccounted for from a commercial diving ship. The captain of the boat was helping with the rescue. Four other people were rescued. Lt. Cmdr Kroll later confirmed the ship sunk near the north shore of Santa Cruz Island after taking on water.

Earlier, the U.S. Coast Guard tweeted that it was coordinating a large rescue effort Monday in response to the fire.

They were probably all leftists who vote Dem. Good riddance.

When are we going to demand sensible boat control and ban all assault boats?

Fires aren’t allowed on boats in California. How did this even happen? They passed laws against this!

Passenger list should be an interesting read. How many Epstein accusers on board?

You are discounting that jumping into the sea was not possible for many.

An explosion may have started this.

You are discounting that jumping into the sea was not possible for many.

It was a dive boat. One would assume that all aboard were comfortable with jumping OFF the boat and into the ocean.

If it was an explosion they wouldn’t have had the opportunity.

Sounds like the fire started above deck and the passengers were below deck. The crew survived.

So much for going down with the ship. It looks like the crew members saved their own skins and let everyone else burn up in the blaze.

I spend 3 hours every day trying to make California burst into flames with my mind.

But I’m getting closer!

Too bad Zarate didn’t take diving lessons. I hope Monica wasn’t on board .

Did Epsteins prison guards and the warden take this sea trip???

My girlfriend’s family lives in Santa Barbara, so I can tell you with confidence that there are tons of republicans there. Hope Ranch is rife with filthy rich arms dealers and nefarious defense contractors. And since someone was loaded enough to take their 17 year-old daughter scuba diving for her birthday, there’s a good bet that at least a few people that burned alive voted for the party that promotes the tax breaks for the rich, trickle-down economics party of hometown hero Ronnie “I don’t recall” Reagan.

You mean American businesses providing services to the government through fair bidding procedures?