First, a quick little prologue…
I post these type of stories because I believe many of you are ignorant of the type of abuses that sometimes have been going on. Let me repeat an oft phrase I’ve been using: Conservatives are stupid, stupid not because they are wrong, but because they are unable to understand or fathom the insanity that exists on the other side. It’s like not being able to believe a problem exists because you believe its too crazy to exist, and no person in their rational mind could possibly think that way. But when you can’t see an issue that is there, then that issue spreads, until one day you finally wake up, but by then it is far too late to stop it. Insanity happens. Know and understand thy enemy.

12 months in prison for putting a noose under a carport

MONROE, La. - United States Attorney Stephanie A. Finley and Assistant Attorney General Thomas E. Perez announced today that Robert Jackson, 37, of Ruston, Louisiana, was sentenced to 12 months in federal prison for placing a hangman’s noose under the carport of the home of a Honduran immigrant who moved to Ruston from New Orleans in the aftermath of Hurricane Katrina.

Jackson was also sentenced to one year of supervised release upon his release from prison and ordered to attend anger management and culture diversity programs. ​

He was charged with “violating the Fair Housing Act by intimidating and interfering with another’s housing rights because of race”.

First I have some questions about whether this is even Constitutionally appropriate. Isn’t the state supposed to handle these type of matters? So why is a federal court prosecuting him for what is basically a domestic dispute?

It’s not like this man even “broke and entered” either, he just stepped onto his neighbor’s property and tied a little piece of rope under an open car shelter. Seems more like the federal government trying to go after people for racism.

A University of Illinois student was charged with a hate crime on Tuesday for allegedly placing a noose in a campus residence hall .

Andrew Smith, a 19-year-old sophomore, was charged with misdemeanor disorderly conduct and committing a hate crime, which is a felony , after students found a noose hanging inside an elevator over the weekend, according to university police.​

Gangbangers, pimps, and drug dealers for actually hurting people. That doesn’t matter anymore though. We live in an age where all that matters are people’s feelings. This is stupid shit.

When the 14th Amendment was passed, I don’t think the people ever envisioned civil rights violations constituting what the term has come to mean today.

Back then, it is was a pretty big and controversial thing for the federal government to get involved in things like this. That was a seen as an area that was supposed to be under state jurisdiction.

Discrimination on the basis of race, religion, or national origin was written right into it.

To some it is. Personally I advocate for declaring the gangs and cartels terrorist organizations and putting the full might of the US military into destroying them at the source.

Anyone convicted of a drug related or violent felony should either be executed or spend enough of the balance of their lives in prison such that they will no longer pose a threat to the rest of us upon getting out.

That would eliminate about 95% of the violent crime in our most dangerous cities and up to half of it in rural America.

The only problem with the war on drugs is we never got serious about fighting it.

The only problem with the war on drugs is we never got serious about fighting it.

That’s a bunch of crap.

The rest of the sections have nothing to do with race. This is really just the slave provision and was not intended to apply to anyone other than the children of slaves.

It has no relation to the trumped-up charges that this individual faces as a result of a bad decision. The fact is, no one was hurt and no one died as a result of this. The worst violation we have here is trespassing. Any actual conservative will recognize this and be pissed off about government overreach.

Under the auspices of the 14th it was passed. 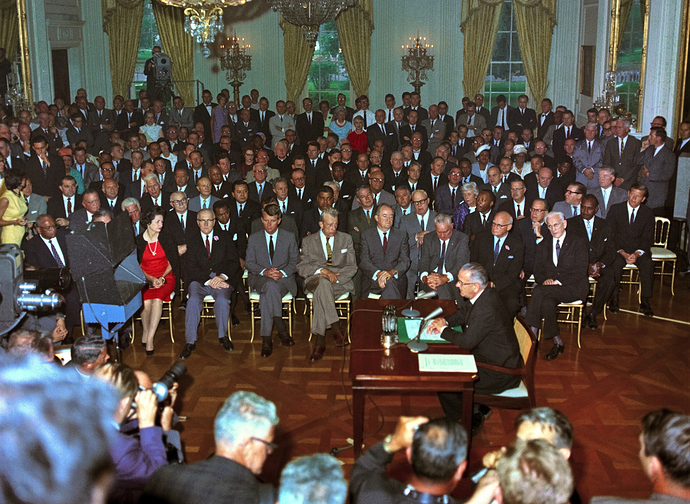 The Civil Rights Act of 1964, which ended segregation in public places and banned employment discrimination on the basis of race, color, religion, sex or

My fault for being unclear.

I don’t even think the civil rights act of 1964 was meant to apply to situations like this.

What this guy did wasn’t even an overt threat.

Not this crap again! Wasn’t there already a thread topic on this by the same poster? Don’t need a part 2, just update the original thread!

Who do you think you’re kidding exactly?

That’s a broad brush you’re using there, pilgrim. I’m conservative and fully realize how insanity is replete within the liberal mob. Liberalism is a mental disorder has been a signature line I’ve used now for decades. They are not even aware that they are sick.

The wisdom of the self important, uniformed, and misguided.

We’ve known who the enemy was for decades going back to the fifties.

Methinks he be yet wet behind the ears and laboring under the misapprehension that nothing of significance occurred before he was born.

The ill wisdom of youth.