Wisconsin fallout over Afganistan, Covid 19, The US economy and taxes

I live in Wisconsin and agree. Amid a national slump in his popularity, President Joe’s Biden’s approval rating has dipped in Wisconsin as well, dropping from 49% in August to 39% in a statewide poll by the Marquette University Law School released Wednesday.

But it isn’t only Biden drawing negative or declining ratings in this battleground state a year before the 2022 midterms.

Approval for Democratic Gov. Tony Evers is down from 50% in August to 38% in the new poll. Asked if they would vote to reelect him or vote for someone else, 40% said “reelect” and 53% said “someone else.”

Evers faces reelection next year. This is the first time in 17 Marquette polls that Evers has not had a positive approval rating.

Meanwhile, views are negative toward the leading Republican in Wisconsin, Sen. Ron Johnson, whose seat will be on the ballot next year: 36% viewed him favorably, 42% unfavorably and the rest didn’t know. That is basically unchanged from August. But Marquette has polled on Johnson nearly 50 times since 2012, and he has received his highest negatives in the last two surveys.

These kind of “reelect” questions can overstate the level of opposition to incumbents by pitting them against an unnamed opponent.

But they are part of a broader picture in the poll that is full of negative perceptions toward political leaders.

Franklin said the reelection numbers provide a measure of firm base support for an incumbent. He said it was striking that despite representing different parties, Johnson and Evers each have a reelect number of around 40%. In both cases, they are overwhelmingly backed by voters in their own party, overwhelmingly opposed by voters in the other party, and struggling with independents.

Former President Trump’s numbers were the worst of anyone the poll asked about: 38% viewed him favorably, 57% unfavorably, down slightly from August.

In fact, despite his slipping job ratings, Biden led Trump in a hypothetical rematch in Wisconsin 45% to 41% (with 11% saying “neither”). That is the same 4-point margin Biden enjoyed in the Marquette poll’s final pre election survey. Biden carried the state by less than 1%. Your thoughts

I live in Wisconsin and agree. Amid a national slump in his popularity, President Joe’s Biden’s approval rating has dipped in Wisconsin as well, dropping from 49% in August to 39% in a statewide poll by the Marquette University Law School released Wednesday.

Joe Biden’s polling numbers are the same as trumps throughout his presidency. Only back then you guys insisted that the polls were inaccurate and meaningless….

It’s impossible to poll republicans and independents, many refuse to offer a view. 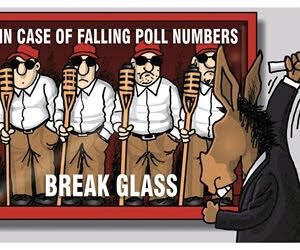