White bands the WOKE see as racist and sexist

The song has stirred controversy for decades because of its lyrics, which reference a slave ship and violence against Black women in its opening lines.

Robin Thicke’s “Blurred Lines” attracted controversy soon after it was released in 2013 for its lyrics, which quickly inspired debate about consent. In 2019, Pharrell Williams, who was featured on the track alongside T.I., told GQ he was “embarrassed” by some of his older songs, which he said he “would never write or sing today.”

But woke seem ok with -

Well I’m tryna to hit the hotel with two girls that’s wide awake
Take this d*ck and swallow bay mascato got her freaky
Hey you got me in a trance, you take of yo pants
You pop on a handstand you got me sweating please pass me a fan DAMN!

"If you don’t bring back my mr fn money

or my mr fn dope,

you can forget about Christmas n***a,

cause you ain’t gon even see New Year’s."

Finally NOT even a peep with … 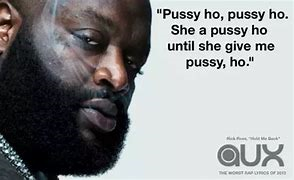 The demise of American culture and the degradation of what is decency in the commoner!