When being green faces its logistical nightmare

And some are even willing to go to war to keep their country from being an international garbage dump.

UPDATE Nov. 1, 2018: Malaysia recently announced plans for a complete ban on plastic imports within three years, as reported by Reuters and the New Straits Times. During that time frame, clean material will only be allowed from the U.S., European Union and Japan, and an import levy will be charged.

According to a report from the China Scrap Plastics Association, detailed by Plastics Recycling Update, Malaysian importers will also have to phase out their use of foreign material in the meantime. Starting the first year, at least 30% of plastic must be sourced domestically. That increases to 40% in the second year and 50% in the third. Though, like in China, there is some question of whether domestic collection and processing infrastructure can be ramped up quickly enough to make the country self-sufficient. 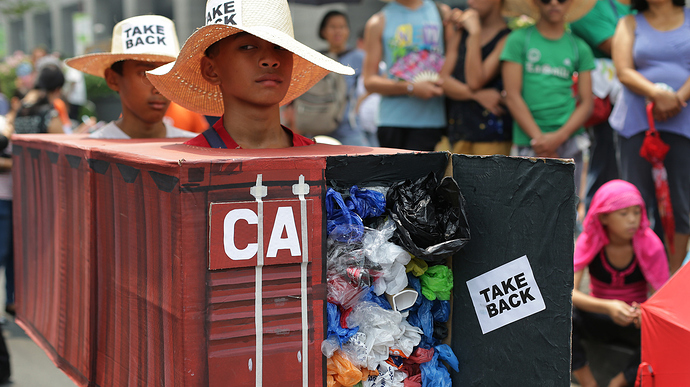 More than 100 shipping containers had been declared to hold recyclable plastic scraps. But when they arrived in Manila, officials found household trash, including adult diapers.

In response to an influx of plastic that once went to China, a new policy would require manufacturers to begin using higher percentages of domestically sourced material.