# Welcome to the Harris presidency!

Make no mistake: the professionals are back, as rich, entitled and useless as ever

Congratulations, President Harris (pronouns: she/her)! At last, the United States of Mutual Loathing will lead the world by having a female president, just like lots of other countries managed decades ago, and without making a dumb fuss or giving a patronizing lecture.

And thank you, Joe Biden (pronouns: he/c’mon man), for accepting the presidency on Kamala’s behalf on the kind of raw day when you should be indoors with a tartan blanket on your legs and the remote in your hand. And thank you to our new surgeon-general, Dr Jill, for propping him up, making sure he stayed awake, and reminding him not to sniff Lady Gaga’s hair.

This inauguration looked less like Joe Biden’s big day than a dress rehearsal for his state funeral. The elderly audience was spaced like the crowd on the bleachers of a failing minor-league team. The speeches, with Amy Klobuchar emceeing with the gravitas of a principal at PTA night, sounded like a motivational lecture from a parallel universe. The turns, Lady Gaga and Jennifer Lopez, were a senior’s idea of what the kids would like. Both comported themselves with MILF-like dignity. So did Doug Emhoff, who appeared to be wearing an outsized PVC bondage mask.

The networks have been gushing about the restoration all week, apart from Fox, which is having a nervous breakdown. So Biden’s speech will be described as a triumphant call for ‘unity’ and a return to normality, even though the unanimous follies and corrupt normality of the Biden class are what created the Trump presidency in the first place. Make no mistake: the professionals are back, as rich, entitled and useless as ever.

Say what you like about Trump’s ‘American carnage’ speech, but at least it caught the imagination. Biden approached the mic with the resolve of a man who’s had a double dose of denture paste and a little blue pill, but his speech was the usual blue-rinsed anticlimax.

Two paragraphs of coherence before the left side of his mouth drops down like he’s having a mini-stroke. Twenty minutes of gasping and croaking, the words sliding out of the other side of his mouth without rhythm or sense, the pin eyes visibly lost and fearful. And the inevitable flubs and malapropisms — ‘rural and Ural’ instead of ‘rural and urban’. Xi and Putin and Rouhani will be quaking in their boots, once they stop laughing.

What Americans need is jobs, schools, healthcare and halfway reliable elections. What we got was Wheezy Joe getting weirdly angry about the need for sub-religious healing, how racism is finally over, and how American democracy, which is a bad joke at home and a laughing-stock abroad, is actually invincible and the global future. And also the Pledge of Allegiance delivered with sign language in a sort of politically-correct TikTok dance.

This was an old, tired speech from a lifer in an old, tired system. It was as the Biden presidency shall be: a placeholder for that short interlude before the American oligarchy resumes the hardening of its defenses against its subjects: before the Harris presidency, before the corporatist cash-out that is the Green New Deal, before the domestic terrorism legislation which will turn the failures of the War on Terror into the successful repression of free speech, one of the only things that America still produces. So help us God. 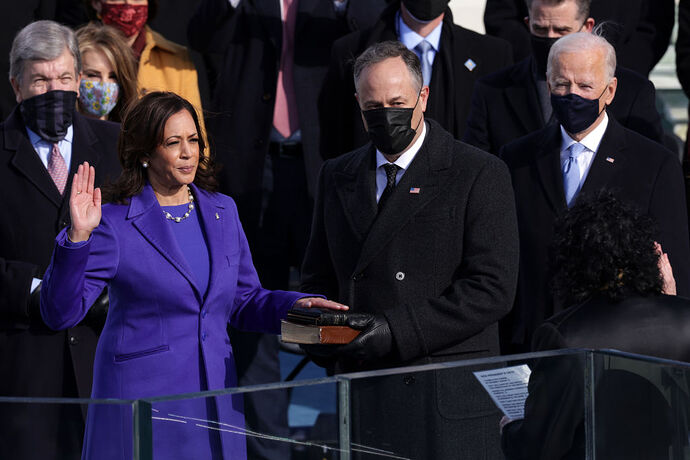 Welcome to the Harris presidency! - The Spectator - news, politics, life...

Congratulations, President Harris! At last, the United States of Mutual Loathing will lead the world by having a female president