We the Sheeple of the United States

In 1917, wearied and angered by the slaughter on the Western Front, French soldiers marched toward the battlefield past the general staff bleating like sheep, protesting what they correctly surmised would be another blood bath. Later they would openly mutiny against these attacks, willing to defend the front but unwilling to continue charging across No Man’s Land into artillery and machine gun fire.

In the United States we are rapidly approaching the point where a soft totalitarianism may govern the country. Americans don’t even bleat. Instead, we’ve actually become sheep.

For eight months now, we have endured masks, shutdowns, and quarantines. Our busy tin-pot dictators and bureaucrats are now closing down Thanksgiving, with Christmas surely not far behind. Playing on fears of COVID-19, they have trampled the liberties guaranteed in our Constitution: freedom of speech, freedom of assembly, and freedom of religion. They enacted all these measures to fight a virus with a 98 percent survival rate.

Moreover, these dictates have brought hidden costs and consequences: widespread isolation and depression, cancellations of elective surgery, and an increase in calls to mental health help lines.

Are these restrictions really in consideration of our health, or is something darker and deadlier at play here?

This past September, speaking at the United Nations, Canadian Prime Minister Justin Trudeau announced “this pandemic has provided an opportunity for a reset. This is our chance to accelerate our pre-pandemic efforts to re-imagine economic systems that actually address global challenges like extreme poverty, inequality, and climate change.”

An opportunity for a reset?

Fox News commentator Tucker Carlson recently presented Trudeau’s remarks alongside similar ones from other public figures, demonstrating that politicians, bankers, and social media companies are using this pandemic to change the way the rest of us live our lives. If allowed to succeed, this transformation, this “Great Reset” as some globalists call it, will make them wealthier while leaving the rest of us as obedient slaves to global masters.

Coronavirus was also the excuse used by some of these same politicians to allow mail-in ballots. This past Saturday so many shoppers were swarming the aisles of our local grocery store that on my arrival home I actually looked online to make sure I hadn’t missed some catastrophe. Despite such crowds, some governors claimed voting in person would have spread the virus, promoting mail-in ballots as the solution and thereby leaving the election wide open to fraud.

Our government’s response to COVID-19 has also greatly increased our national debt. Even now, we hear calls for more money to be printed and paid out to those who have lost their jobs and livelihoods. And how did they lose their jobs in the first place? Thanks to government lockdowns.

Worst of all, most of us blithely submit to these measures. We do as we are commanded. As Tucker Carlson commented, if authorities told Americans that horned Viking helmets were now required to battle COVID, we’d see hordes of people looking as if they’d just stepped off longships.

Americans once prided themselves on being independent and mistrustful of big government. Our ancestors were unafraid to stick their necks out. As one young reader, Maddie, wrote to me, “The men who signed the Declaration of Independence were signing their death warrant.” Others throughout our great history have championed liberty, often at great personal cost, and often as solitary voices crying out in the wilderness.

The state seal of Virginia where I now live bears an image of Virtue conquering dictators and bears the motto: “Sic Semper Tyrannis” or “Thus always to tyrants.” Given our full compliance with our governor’s orders, that motto right now is a bad joke.

Presidential candidate Joe Biden and his crew have already promised more restrictions if he is sworn in on Jan. 20. Will we kick back against these orders, or will we remain sheep? Will restaurant owners and other small businesses – the ones that are left – band together and insist on keeping their establishments open, no matter the consequences? Will church leaders find a spine and throw open their church doors? Will parents with children demand that schools reopen?

If enough of us banded together, we might oppose the tyranny that is fast becoming the new American Way.

When I was a kid, my grandmother taught us this little ditty:

Grandma: “Is everybody happy?”

Grandma: “Is anybody sore?”

Grandma: “Then let’s all give the lion’s roar!”

At which point we would roar away as loudly as we could.

Today, we stand at a crossroads. We can be lions, or we can be sheep. The choice is simple, though the consequences may be dire.

But we do have a choice. 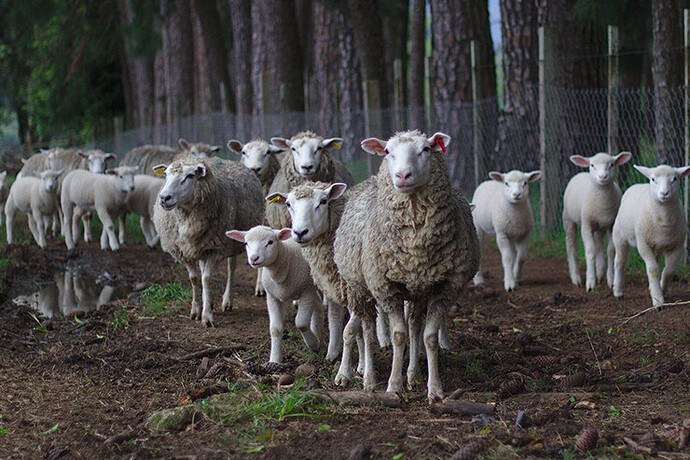 We the Sheeple of the United States

Ever since March 2020, the American people have followed their government leaders through one set of restrictions after another When will this compliance end?

where a soft totalitarianism may govern

This seems to be the only part Jeff might be wide of the mark on… It will be anything but SOFT.

Our busy tin-pot dictators and bureaucrats are now closing down Thanksgiving, with Christmas surely not far behind. Playing on fears of COVID-19, they have trampled the liberties guaranteed in our Constitution: freedom of speech, freedom of assembly, and freedom of religion. They enacted all these measures to fight a virus with a 98 percent survival rate.

They claim Trump was a dictator yet we now see the real dictators in our governments, Governors and mayors across the country.

10 years ago this would never have happened. Woodstock took place in a pandemic yet today people hid ein their homes, stay home because the governor said so and lose their jobs and livelihood because governors dared t so.