A brilliant move if carried on to fruition. If this goes to trial, Gabbard’s lawyer can adduce the Russian Uranium One deal as proof of Clinton’s collusion with Moscow. Who will be seen as the Russian stooge then? 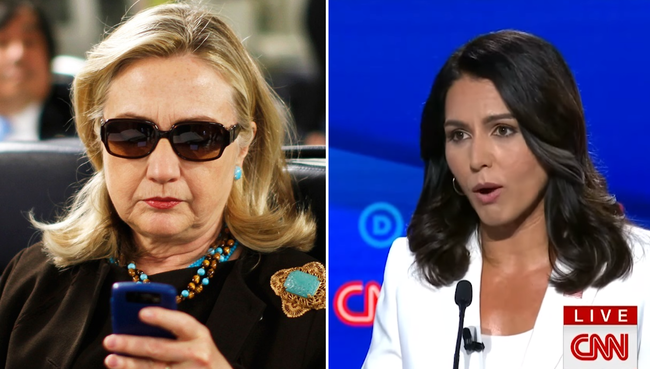 "She's the favorite of the Russians."

If Hillary apologizes, her next “Russia” mudslinging will only boomerang on her. It also removes the Russian conspiracy sting from the coming presidential race. Tulsi is a woman,
ethnic minority (sort of) and a veteran. It would be fun watching the libtards going after her with new hatched conspiracies.

As an outside observer of American politics, it seems lately that these politicians you have are treated more and more like corrupt royalty. They engage in corruption that is generally only seen on such a scale in African countries - where every elected office holder is working on some get rich quick scheme. The Clinton’s are the worst of the worst when it comes to this. They have both been political creatures earning decent, but not extravagant salaries, for the majority of their lives yet they are wealthy beyond belief and can seem to get away with everything - up to and including murder. While this is a noble effort on the part of Tulsi, it won’t go anywhere.

I don’t think that Gabbard’s lawsuit has anything to do with Uranium One.

They have both been political creatures earning decent, but not extravagant salaries, for the majority of their lives yet they are wealthy beyond belief and can seem to get away with everything

They are wealthy, but not wealthy “beyond belief”

When you are famous, and an ex president, you’re going to be paid handsomely just to talk to people. It just is what it is.

Not now. But Gabbard’s lawyers can argue that it is Hillary who is Russia’s asset. After all, Clinton and her libtards have been tearing the country apart with their incessant “Russian plot” allegations.

I’m worried that the feud between these two is nothing more than a distraction to keep us fixated on them and their nonsense as opposed to the crimes that Hillary Clinton perpetrated.