Last week, word emerged from the White House that Biden’s own staff can’t stand to listen to him. It’s not that they don’t agree with his policies (heck — they probably crafted them). Instead, it’s that he’s such a verbal loose cannon that they shudder when they hear him speak off the cuff. Yesterday, the White House staffers paying attention to his answers about western wildfires were so worried about where his mouth was taking him that they pulled the plug on him in mid-sentence.

We, along with every political outlet in America, [reported last week](https://www.americanthinker.com/blog/2021

/09/bidens_own_staff_cant_stand_to_watch_his_press_conferences.html) on a Politico story explaining that Biden’s staff constantly worry about Mr. Big Mouth in the White House. As we summed it up then, “we still don’t know who is dictating his policies, but it appears that everyone in Biden’s orbit is begging him to keep his mouth shut and be the good little puppet they need.”

The same Politico story noted that “[Biden’s] verbal miscues have been causing headaches for him and his team. Biden has delivered several self-inflicted wounds during freewheeling Q&A sessions that required immediate clean-up.” That problem may explain why, on Monday, a panicked White House cut off Biden’s feed in mid-sentence:

The White House abruptly cut the feed of President Biden’s briefing on wildfires with federal and state officials.

During Monday’s visit to Boise, Idaho, Biden received a briefing about the ongoing wildfires that have plagued several states out west.

While Biden spoke for much of the briefing, at one point he said he wanted to hear more from George Geissler of the National Association of State Foresters.

“Can I ask you a question?” Biden asked.

“One of the things that I’ve been working on with some others is —” Biden said before being cut off mid-sentence.

Nor is this censorship an anomaly. The Fox News report quoted above points out that in August, the White House cut Biden’s audio feed when a reporter asked him about the military’s deadline to withdraw from Afghanistan. The White House did the same in March when Biden volunteered to take questions from Democrat politicians.

Puppet politicians are all well and good when they take their orders and do as they’re told. They become a problem either when they try to seize real power or when they become so verbally incontinent that they can no longer be trusted to stick to the script and speak only when their strings are pulled.

In January, I predicted that Biden would be out by June. I was obviously wrong. I’m not going to risk picking a specific date by which Biden retires from office. However, I do not see how his staff can keep propping him up if they’re reduced to silencing him whenever he gets a head of steam and starts moving his lips on his own. 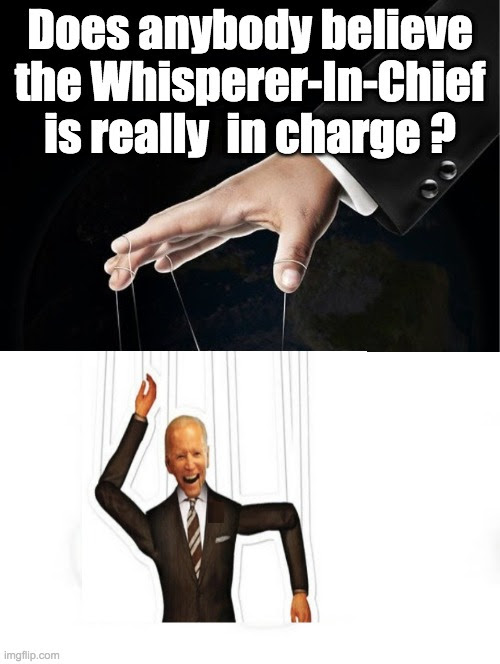 Last week, word emerged from the White House that Biden's own staff can't stand to listen to him.  It's not that they don't agree with his policies (heck — they probably crafted them).  Instead, it's that...

Concern over President Biden’s lack of press accessibility mounted Wednesday evening, after the commander-in-chief told reporters he was “happy to take questions” before having his microphone and camera feed cut off.

The incident occurred at the end of the 46th president’s appearance at a House Democratic Caucus event, where he was joined virtually by House Speaker Nancy Pelosi (D-Calif.) and her members.

“And I’m happy to take questions if that’s what you — I’m supposed to do, Nance,” he continued. “Whatever you want me to do.”

JOE Biden’s microphone appeared to be cut off by the White House after he was asked if he plans to rescue stranded Americans once his August 31 deadline expires. Officials estimate that around 1,500 citizens are trying to flee the country but Americans have been told to stay away from Kabul airport amid fears of a potential ISIS terrorist attack.

At the same time He is ruining this country he is flooding America with people that hate America think about it Mexico hates America we conquered their country. Mexicans Are going to vote for
The party that hates America that’s Democrats.
Hatians are extremely proud people that will not assimilate to our country they are offended by flag waving Americans. Who Will they vote for? Democrats.
Dominicans wont assimilate, Puerto Ricans wont assimilate, Afghans, obviously hate America Somalians hate America. Wave in American flag anywhere near these immigrants they will call you A racist. So it doesn’t matter how bad of a job Democrats do they’re going to get voted in or cheated in buy new immigrants that absolutely hate this country.

Mexico loves the US as we take their excess population, educate them put them to work and they send in excess of 30 billion a year back to Mexico.

Not to mention saving them billions a year in welfare/healthcare for their excess population.

Yes they love the money they hate America,
You think disrespecting our laws since 1965 is love?
I work in a major city I work with first generation illegal Mexicans and Mexican American citizens they make fun of America, they have no interest in staying here they’re literally making $13 an hour and buying houses in Mexico. There is no investment in America they are only using us to send money back home and buy a house to retire in