The tax proposals by Elizabeth Warren are simply not realistic

As Elizabeth Warren likes to say, she has many plans to solve our issues. She claims she can fix the economy, create affordable housing, forgive student debt, and expand child care without breaking a sweat.

Unfortunately, the core theme to every proposal is new higher taxes. By her own estimates, she has proposed more than $26 trillion in tax hikes over a decade. It is hard to conceive of that vast sum of money. The time it takes for 26 trillion seconds to elapse is almost 834,000 years, which is about 139 times as long as human civilization has existed. This is why Saturday Night Live last week quipped, “When the numbers are this big, they are just pretend.” We have to laugh so that we do not cry.

These tax increases would dramatically expand the size of the federal government, increasing the Internal Revenue Service takings from American taxpayers over the next decade by 63 percent. Moreover, her tax hikes would be larger than the entire projected individual income tax collections of the federal government over the next decade, and just shy of total expected collections for both individual and corporate income taxes combined. Functionally, we would have to double the income tax burden on every American, along with the income tax burden on every business, to cover the amount that she wants to raise for her plans.

She couches her rhetoric in promises that she will not raise taxes on the middle class. The other day, she went so far as to promise that only billionaires will have their taxes go up. That is simply laughable. Her tax hikes would hit every American, regardless of income. Every investor in the country would be subject to her new financial transactions tax or her mark to market capital gains plan, including anyone with pension or retirement investments. Every worker would see their tax burden go up because of her “Medicare for All” plan, which requires a new tax to fund a government provision of universal health insurance. Small businesses would see their taxes rise under her new business tax plan. The Joint Committee on Taxation, the official tax scorekeeper of Congress, would surely score her proposals as raising taxes on the middle class.

Her tax proposals are even further to the left of former President Obama. Her corporate income tax rate proposal is 14 points higher than what the Obama administration proposed. Her tax increases are even to the left of Bernie Sanders, whose proposals are estimated to raise only $23 trillion over a decade. The claims in her campaign documents, however, do not tell the full story. In many instances, her projected revenue increases are too high because she fails to account for the interactions among her tax proposals and pays no attention to the economic damage they would cause. Changing one tax impacts the revenue raised by another tax, and so there will be consequences to raising taxes that high and that quickly as individuals and businesses will naturally rethink their behavior.

Further, the revenue estimates prepared for her campaign by left leaning economists Emmanuel Saez and Gabriel Zucman have been subject to widespread ridicule in the economics community. Even if their wealth tax proposal, which Warren has adopted, is constitutional, and it is not, Larry Summers, a former Clinton administration and Obama administration official, estimates it would only raise 40 percent of what she says.

In some ways, this is good news. While her proposed tax hikes are huge, they would not quite be a full 63 percent increase in the federal revenue baseline. Perhaps taxpayers will only suffer a 40 percent or 50 percent increase in tax revenue. But that means her spending plans are not even close to fully funded. Despite claiming to be the first candidate with a detailed plan to pay for “Medicare for All,” she is trillions of dollars short, even if one takes her numbers at face value. Federal deficits are already sky high. If enacted, her plans would push them into outer space.

Warren claims to be a wonk, with policy proposal after policy proposal for issue after issue, but the plans simply do not add up. While $26 trillion may sound like a pretend number, the reality is that her ideas would hit every American where it hurts the most, right in their pocketbooks.

Nicole Kaeding serves as the vice president of policy promotion and is an economist with the National Taxpayers Union Foundation in Washington. 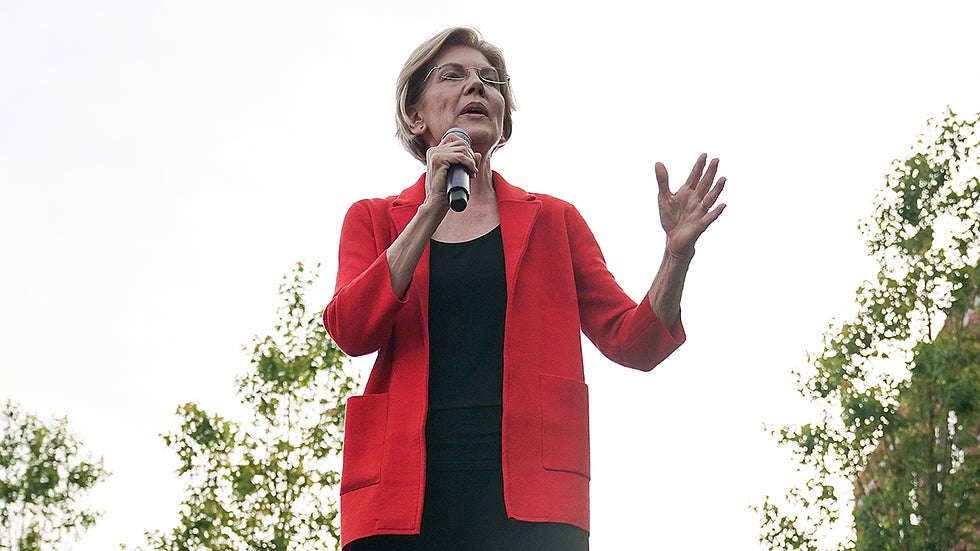 The tax proposals by Elizabeth Warren are simply not realistic

The combined costs of her various proposals would amount to an unrealistic amount of money.

Well, this is not the first time she lied to get ahead, not likely to be the last either. Hopefully people are still paying attention out there. I know the myth of free shit is dazzling but it’s just that - a myth.

The US GDP is about 21 trillion.

Elizabeth Warren wants to spend more than twice our GDP to provide healthcare to FOREIGNERS.

Taxing wealth is a sure way to have the wealth of a nation mov to other more accommodating countries.

Interesting as France and Britain tried it and it failed miserably.

Simply follow causation and the result that followed. Or, hey. Double down on it and expect different results.

Do these liberals have even just one shred of common sense?

Nevermind… I answered my own question

Manufacturing is affected by competition.

What are factors affecting competition?

The issue at hand is if 1 business moves overseas others follow as their prices are less than domestic goods so they also follow suit.

Does anyone in government care?

Liberals complain about the tariffs and price increases as Amricas work at McD’s to make a living.

Well, there you have it, Lou.

Not a hard bread crumb to follow unless you a liberal.

There’s the old saying money goes to where it is treated the best.