If media think they are in the clear on the Russia hoax, they need to think again

It is beyond dispute that officials in the Obama administration, and others, can be prosecuted for crimes committed in carrying out the conspiracy to take down President Trump. Indeed, to borrow from the “climate change” gang, there is a consensus — 99% of serious past and former prosecutors agree on that point.

What has drawn no attention whatsoever is the question of whether members of the media, who either knowingly or unwittingly assisted Deep State types to perpetrate the Russiagate witch hunt hoax, can hide behind the First Amendment to protect themselves from prosecution for involvement in the conspiracy. Under an apparently little understood legal doctrine, recognized in existing precedent by the Supreme Court, the media are not in the clear.

There is ensconced in well established case authority what is typically known as the “state actor” doctrine. In cases brought primarily under federal civil rights law, private — i.e. non-governmental — parties, including members of the media, have been held to be, in essence, extensions of the state — i.e., agents of the state officials who carried out civil rights violations — and thus subject to suit in their own right, as so-called state actors ( Berger v. Hanlon 188 F.3d 1155 [9th Cir. 1999], on remand from Hanlon v. Berger 119 S. Ct. 1706 [1999]). It should be remembered that those civil rights statutes include provisions making certain civil rights violations crimes.

And, indeed, although there are instances in which state officials involved in such violations have been held to be immune from suit for their violations, again, under longstanding legal precedent, the Supreme Courtruledin Richardson v. McKnight (521 U.S. 399 [1997]) that “state actors” as private parties may not take advantage of the immunity of the officials whose violations they helped advance. Interestingly, in the foregoing decision, the vote was 5-4 to deny “state actors” immunity. The five voting against were the five liberals then sitting on the Court.

Now, if that doesn’t send a “tingle up the leg” of some media types out there who helped advance the Russiagate plot — as extensions of the state officials involved — then they’re not paying attention to what may be headed their way. 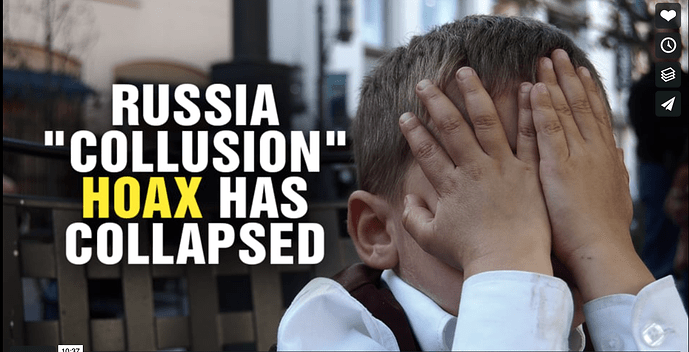 If media think they are in the clear on the Russia hoax, they need to think...

Under an apparently little understood legal doctrine, recognized in existing precedent by the Supreme Court, the media are not in the clear legally.

I posted a video in the Spygate thread regarding this very issue yesterday! A lot of media members can be prosecuted under the FARA act, as many have taken payments from foreign governments to publish or broadcast their propaganda! China is one such country that has been active in this subversion of America’s news stream!

The media doesn’t;t need China to subvert the news stream, the left in the US have been doing a wonderful job to date.

Need and doing are two different things. Your OP is about prosecuting members of the media, and I am just pointing out an obvious issue!