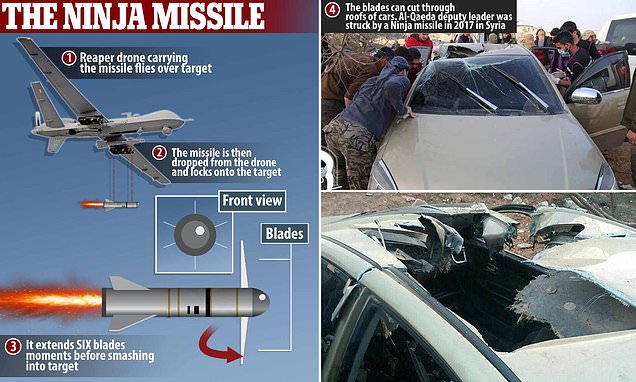 US has 'missile' with six BLADES that kill terrorists not civilians

The CIA reportedly secretly developed a new dive-bombing 'missile' that kills targets without exploding. The non-exploding weapon crushes targets with the help of six large blades.

Interesting. I suppose there is no concern that it can be reverse engineered.

No Mission Impossible type of self destruct?

Six is a good number for killing fools. I like it.

If AOC asks about it, just tell her it is a flying garbage disposal

This is probably a really silent way to get the job done too. I imagine it would sound more like a car accident than a bomb getting dropped. In the remote areas where these idiots operate it’s less likely that anyone will actually hear the impact. Smart thinking.

I hope you dip the blades with lard and pig’s blood so when they get macerated they will stink of rotten pig.

In Iraq, they were strapping guidance hardware onto concrete “bombs” to kill tanks that the Iraqis had embedded in civilian neighborhoods to protect them from being targeted. Sometimes the concussion damaged the nearby houses, but civilian casualties were very minor. Out in Israel, the British used to wrap the bodies of suicide bombers in pig skin before burial. So they can then go to their maker to claim their 72 virgins wearing a rotting pig skin.