The Dark Side of the Moon

Further to my post a couple of weeks back concerning living on the far side of the moon, I am surprised that this has not received more coverage in this forum…

They will start building landing sites now and will claim it and all territory within 12 miles of the dark side.

Not really. They haven’t put any people on the moon yet. We already have a rover on Mars.

Of course, knowing you, you probably think the Apollo Program was filmed on a movie set.

Impressive? We put people on the moon with slide rules and No 2 pencils.

We figured it out that way, but the actual capsule carried 3 PDP-8 type computers for guidance … which allegedly crashed during final descent and Neil Armstrong ‘flew it’ in.

Even at that they had less computing power onboard both vehicles than a typical watch has today.

Yeah, I think the PDP-8 == one calculator

That’s right, China! We put men on the moon with cars to drive around!
You ain’t got nothin’.

All I can think of is Pink Floyd…tunes cranked up out in the shop.

I remember … that was about a month’s pay, and I was still in high school
Also, what the heck is that RPN rubbish?

I remember when the best calculators available had Nixie tube displays.

I used get a real kick out of loaning it to someone in a meeting and watching them search for the = mark.

I remember … that was about a month’s pay, and I was still in high school
Also, what the heck is that RPN rubbish?

RPN was the best thing to come along since sliced bread, as far as we engineers were concerned. It operates a calculator the same way as we operated a slide rule … logically. It made programming simple.

I used get a real kick out of loaning it to someone in a meeting and watching them search for the = mark.

I have two shirt pocket sized HP15C calculators, one of which I have had since 1977. I bought the first one for work to replace an HP25 which I had a problem finding batteries for, and bought the second a couple of years later for home use. Now I have one upstairs and another on my desk in the basement. I use both of them nearly every day.

Speaking of the two, when I sat for the PE exam, I took my slide rule since I had been using it for years. Hand held calculators were just becoming popular.

The proctor saw that a number of people had brought calculators. She read the exam rules aloud…saying that we could use reference books and slide rules. There was no mention of calculators…so all the calculators were prohibited.

Talk about some pissed off people. Many gave up midway and left the room after an hour or so. For me and my Deci-Lon, it was a breeze. 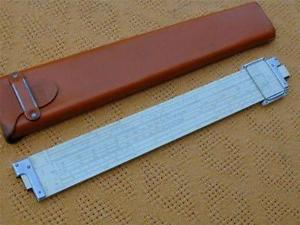 What year did you take the PE?