# The Clock Has Almost Struck Midnight. Democrats now control the presidency, the Senate, and the House of Representatives

The Clock Has Almost Struck Midnight.

Democrats now control the presidency, the Senate, and the House of Representatives.

As a result of the Georgia run-off catastrophe, the Democratic Party will control the presidency, the Senate, and the House of Representatives in a few weeks. The consequences of “demographic changes” (which, by holy writ of the exalted American corporate media, must always be referred to as if they are acts of God, not 55 years of specifically enacted domestic policy), and the movement of a highly educated white ruling class toward progressive politics are now fully realized. The clock is ticking ever so closely toward a midnight featuring permanent Democratic control of the federal government, simply because there are more Democratic voters than Republican ones.

A second Trump term or one measly win in the Peach State would’ve delayed the inevitable. But a few pet policies—all of which are seriously bandied about by mainstream Democrats—will all but guarantee this dominance now that Democrats have captured both houses and the presidency. Democrats will end the filibuster in the Senate, move to eliminate the electoral college, bestow amnesty and later citizenshipon 30+ million illegal immigrants, add Puerto Rico and The District of Columbia as the 51st and 52nd states, and finally, pack the Supreme Court or rotate its membership to secure the desired ideological majority. The fervent ideological base of the Democratic Party, at full froth and consumed by social justice religious ecstasy, sees an opportunity within reach to deliver a BIPOC-led and trans-affirming post-colonialist utopia. One needn’t wonder if they’ll let time-honored Senate procedural traditions stop them. After these changes, the presidency will not be competitive, and Republican majorities in the House and Senate will be nearly impossible to achieve.

The only thing standing in the way of this total authority for the Democratic Party is Democrats themselves failing to seize it. And since our fair polity finds itself at a frightfully 1860s-esque crossroads right now, with two national anthems (sound familiar?), amid a national mood of irreconcilable differences, the more likely scenario is one in which the dwindling moderates and compromisers will be drowned out by the louder voices in the party calling for radical change and punitive action against “treasonous” Republicans. Don’t rely on President-elect Biden either—a supposedly devout Catholic who changes his opinion on federally funded abortion at age 76 is not a moral leader, but a party pushover.

With ample cover from a pliant press, increasingly censorious social media, and collaboration from corporations that want access to power, a huge portion of the population will barely notice as Congress and Biden slowly boil the two-party system alive. Democrats now have an unobstructed view of what permanent federal power would look like. They have the legislative means to achieve it and the voter demographics to maintain it. Progressives and leftists in the party demand it. Right now Republicans will have no way of stopping it.

But doesn’t the political pendulum always swing back? Maybe, but there will be no political pendulum to swing after mass amnesty and the addition of just one Democrat-voting state. Consider the case of California: for most of its history, California had a robust and competitive political climate. The Golden State and its 55 electoral votes went Republican in presidential elections for 20 straight years from 1968 to 1988. It had a Republican governor as recently as ten years ago. Today, the largest state in the union effectively has one political party due to the aforementioned “demographic changes.”

The one-party state is a permanent condition on the left coast. In most California elections, the contest is between two Democrats.

Latinos and immigrants in California consistently vote Democratic by vast margins. Whether this is due to persistent anti-GOP sentiment lingering from Governor Pete Wilson’s ill-fated Prop 187 campaign in 1994 (he dared to enforce immigration law when the federal government would not) or a part of a national trend is up for debate. Either way, add in a wealthy white professional class that now flocks to the Democratic Party (due to its embrace of self-flagellating identity politics and liberal cultural causes in lieu of class-based populism), and you have the recipe that produced Democratic supermajorities in both houses in Sacramento.

Even if, as we are relentlessly told, “undocumented” immigrants (who are often quite well documented insofar as they have driver’s licenses, debit cards, and school IDs) do not vote, their children do. And for which party will they always vote? Probably for the one that welcomes illegal immigrants with open arms. Probably for the one whose congressional leaders say that enforcement of immigration laws is inherently rooted in racism (while failing to ask who benefits most from immigration enforcement). Despite high poverty, insane taxes, bad schools, record levels of homelessness, rolling blackouts, and increasing wildfires, there isn’t a soul seriously plotting the big GOP comeback in California because there aren’t enough Republican voters there to contemplate such a reverie. The one-party state is a permanent condition on the left coast. In most California elections, the contest is between two Democrats.

California resembles Mexico demographically more and more each year, and now it’s also beginning to resemble 20th century Mexico politically. The United Mexican States are a perfect example of a nominal democracy that experienced a long period of one-party rule. The PRI (Institutional Revolutionary Party) dominated the Presidency, the Senate, Legislature, and almost all governorships from the Mexican Revolution in 1929 until 2000. Cooperative media and corporations, as well as old-fashioned vote-buying, patronage, censorship, and run-of-the-mill electoral fraud kept the nation under PRI dominance that entire time. Regular elections were held. There were no coups or juntas, just one-party control. It happened there, it’s happening in California, and it seems destined to happen at the US federal level too.

But didn’t Latino voters swing hard for Trump in this election? Yes, President Trump had his biggest gains over 2016 with Latinos, but the demographic still overwhelmingly voted for Biden. If the fantasy is a new cohort of Hispanic middle and working-class Republican voters that will stop the Democrats’ march to federal permanence, it’s just too late .

Many more Latinos voted for Trump in 2020 than in 2016 in some key areas: Miami-Dade in Florida, Harris County (Houston) in Texas, and Maricopa County in Arizona. But Biden still won nearly every Hispanic-majority precinct in Maricopa and Harris counties. And Democrats remain dominant among young Hispanic voters. It is true that some of the counties along the Rio Grande in Texas—some of the poorest and most heavily Mexican-American in the country—swung shockingly hard for Trump in 2020. But this spoke more to the personal popularity of Donald Trump and the poor organization of the Democratic Party in that region than anything else. And whether this was a one-off or part of a trend in the region (it never occurs to Democrats that their message isn’t resonating, only that it was not received), it is no longer even necessary for Texas to turn blue for the Democrats to get total control, thanks to Georgia’s run-off results. And when Texas does eventually go blue (and this large, heavily urban, rapidly diversifying, growing state will almost certainly vote 51% Democratic soon) in a presidential election, it will further close the door on Republicans competing for the executive branch for a long, long time.

But what about GOP dominance of state legislatures? What about the gerrymandering the GOP controlled states will enact? California is losing population! Biden won a historic low 16% of counties! The Republicans will take the House in 2022 and vulnerable Democrats will lose their Senate seats! These are the current coping mechanisms of the day in conservative circles, and the curious sky-is-falling wailings of certain progressives who are undergoing cognitive dissonance gazing at the immensity of the power that stands before them.

Voter fraud or not, Democrats now have a clear path to a permanent federal takeover.

No, the Democrats will not have total control over North Dakota, Wyoming, or Kansas any time soon. They could lose the House in 2022. So what? 30 million newly amnestied Democrat voters will render GOP gerrymandering irrelevant in due time. The Democrats keep expanding their map with newly blue, high growth states (see Georgia), and the GOP is barely ascendant in the dying rust belt. Plus, plenty of left-leaning voters are headed to a red state near you, to (naturally) escape the results of policies they voted for.

It’s also clear from the Georgia results that concerns about election legitimacy will reduce Republican base turnout, a prospect that surely has future Madam President Stacy Abrams positively gleeful. Within a year, expect vote-by-mail to emerge as the left’s latest “civil right.” And, despite research showing voter ID laws have no significant effect on minority voter participation, expect the concept of voter identification to continue its reign of violent white supremacy in the hearts of Democratic politicians and in the pages of the Washington Post.

Voter fraud or not, Democrats now have a clear path to a permanent federal takeover. More Latinos voting GOP and further Republican consolidation of the white working-class will not stop this because it’s too late . Only Democrats themselves can stop it (paging Joe “Defund My Butt” Manchin, now arguably the most powerful man in Washington).

And no one should count on that.

If you’re wary of consolidated political power, not a fan of the current far-left critical race theorist incarnation of the Democratic Party, or simply concerned about the ongoing rending of America’s social fabric, take note now. Whether you’re literally fighting Antifa in the streets to preserve the Constitution, or just occasionally arguing on Facebook during your morning constitutional, you’re almost certain to soon live in a country where there is functionally one party in power at the federal level. 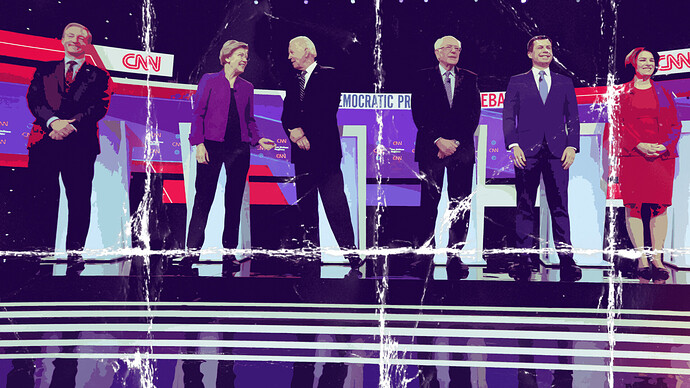 Democrats now control the presidency, the Senate, and the House of Representatives.

Probably 10 with Biden and 12 when Kamala pushes him down the stairs ! Trump might still pull something out of the hat, if he doesn’t at least you boys have got the 2nd ! Spare a thought for us across the pond with our pea shooters & catapults.

Don’t despair though, Our Lord has a plan, this is part of His plan, too many people still asleep and with their head in the sand. America needs to get royally fucked over and literally start falling off the cliff…it’s ONLY something this catastrophic that is going to WAKE the Sheeple up and when that happens the blowback is going to be BRUTAL against the Traitor Democrats and the Traitor RINOs.