Imagine changing the rules in the middle of the game, so that hits rather than runs, or first downs rather than touchdowns, determine the game winner. That is exactly what is happening with COVID reporting, just as many of us predicted. This confirms the lingering question of how much of COVID was about the actual virus versus a political club to hurt President Trump and drive him from office, quite successfully.

As an interesting coincidence, the first case of the novel coronavirus arrived in the U.S. on the same day the House walked articles of impeachment to the Senate. The next impeachment was based on Trump’s supposed calls for violence at a pre-plannedCapitol riot just before Congress was to certify (or not) the Electoral College vote, the riot blamed on a speech he gave after the rioting already started.

In politics, there are no coincidences, and the recent rule changes for tallying COVID case are no exception. What happened after Orange Man went from bad to gone?

The World Health Organization, on Biden’s inauguration day, released a noticethat the COVID PCR test was overly sensitive based on its cycle threshold. A positive result, rather than simply being added to the case counts broadcast constantly by Fox News and MSNBC, must consider other factors such as test specifics, symptoms, and patient history, as would be done for most other laboratory tests in medicine.

Lowering the cycle threshold means fewer cases going forward, not due to anything Trump or Biden did or did not do but simply because of a new way of counting cases. Interestingly this notice was createdon Jan. 13, but not released until Jan. 20, Biden’s inauguration day. What a coincidence!

Did the basic concept of interpreting a medical test based on context just dawn on the medical experts at the WHO? Physicians do that all the time. A single high blood pressure reading in the doctor’s office may be due to “white coat syndrome”rather than true hypertension and is viewed in that context. 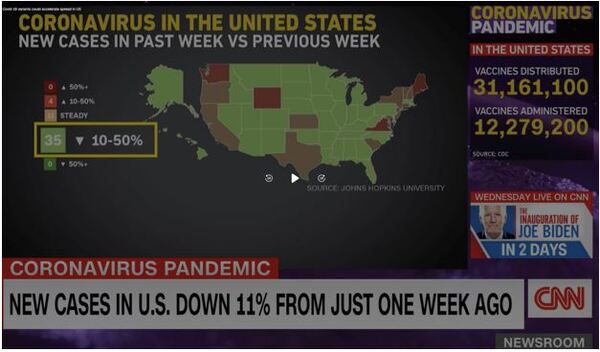 The New York Times knew about the overly sensitive COVID PCR test last summer, reportingthat 90 percent of patients testing positive “carried barely any virus” based on cycle thresholds. Was that news at the time or dutifully ignored?

Dr Anthony Fauci knew this as well, acknowledging in an interviewlast summer the consequences of an overly sensitive PCR test,

A sizable proportion of patients may have been unwittingly receiving positive test results that have little bearing on either their individual health or their risk of spreading the virus to others — suffering, in the process, much avoidable anxiety and disruption to everyday life.

Yet the case counts marched on, the media dutifully blaming every case on President Trump. Until Jan. 20 at least. With the Orange Man banished to Mar-a-Lago and Brilliant Biden now in charge, the “follow the science” crowd may finally be following the science.

This includes the media, singing from the chorus line of new post-inauguration COVID rules. The examples are legion, but here are a few.

Yet post inauguration, COVID is magically under control. From Bloomberg, “COVID cases fall in 46 States, but Biden warns of more death.” Of course he does, his “dark winter,” not from COVID but from his recent executive orders. The New York Timesagrees, “U.S. Coronavirus cases are falling, but variants could erase progress.” Variants are mutations, normal among viruses, explaining why the flu vaccine is less than 50 percent effective and needs to be repeated each year.

It’s not only the DNC media pivoting on a dime as the reign of Biden/Harris takes shape, but also the pied pipers of draconian lockdowns, specifically totalitarian wannabees masquerading as American mayors and governors.

On the cusp of finally getting rid of Trump, the past year’s lockdowns are suddenly a bad idea. New York Governor Andrew Cuomo tweetedon Jan. 11, “We simply cannot stay closed until the vaccine hits critical mass. The cost is too high. We will have nothing left to open. We must reopen the economy, but we must do it smartly and safely.” Ya think? Did this sudden revelation just occur to him as Trump was leaving? After his lockdowns all but destroyed New York City economically? What a coincidence.

Chicago Mayor Lori Lightfoot joined the chorus at the same time, suddenly deciding, “I want to get our restaurants and our bars reopened as quickly as possible.” Michigan Governor Gretchen Whitmer agreed, confirming“that restaurants in the state will be able to open starting Feb. 1 with restrictions.”

Was all this ever about the virus or just about the election? The curious timing of the changing rules and guidelines suggest an answer to that question.

Perhaps Sleepy Joe didn’t notice that he was now president and that the COVID rules have changed in his favor as he was still in Trump presidency mode. From CNBC,

President Joe Biden has painted a bleak picture of the nation’s coronavirus outbreak in his first few days in office.

During a Friday press briefing, Biden said that Covid-19 deaths are expected to reach “well over 600,000.”

The president also warned that “there’s nothing we can do to change the trajectory of the pandemic in the next several months.”

Nothing we can do? Then why the easing of restrictions? Joe needs to catch up and pay attention. Whoever whispered these comments into Biden’s earpiece will soon be looking for a new job.

Next will be the death counts, soon with a new distinction between deaths with and from COVID, as Dr. Deborah Birx acknowledgedlast spring. Use recently departed Larry King as an example.

The 87-year-old was hospitalizedfor COVID in late 2020, spent a short time in the ICU on oxygen but was moved out of the ICU in early January, breathing on his own. Under Trump rules he would be a COVID death.

He also haddiabetes, a recent stroke, previous heart attack with quintuple cardiac bypass surgery, was a former three-pack-a-day smoker, and had previous lung and prostate cancer. Under Biden rules, “No cause of death was provided.”

COVID may have contributed to his death but so did his long list of comorbidities, hence the realistic uncertainty of the actual cause. Compare to the Trump era rules where a Colorado coroner classifieda murder-suicide as a COVID death.

Would anyone be surprised, now that Trump is out of office, if hydroxychloroquine is given a second look? Or ultraviolet light? We’ll see. A new president means new rules.

*Watch the numbers now drop, cases and deaths, all because of the brilliance of Joe Biden compared to the buffoonery of Donald Trump. COVID guidelines are changing right before our eyes, just as the news reporting has morphed from orange man bad to senile man good. Was it ever about the virus or just about the election?

And in the west the governors and mayors are allowing businesses to reopen.

Democrats are magical because we all know they would not destroy small businesses and keep people unemployed to get rid of trump.

We all knew this would happen just like our economy going to shit. Political stunt. Let the puppets dance, I ain’t playing these games.

Pretty much the case. WHO changes the positive test to reduce infections right after the village idiot with dementia agues to fund the WHO. Conspiracy, no say it isn’t so.

I want people on the left to remember we are throwing away money for stupid shit like WHO which literally covered up the virus coming from China, and this is costing the tax payers money. You all are worried about minimum wage when they are taking money out of checks for stupid crap like this.

Also, the virus originated in China. If you don’t like those facts, then Ricky Bobby will tell you what’s what.

The left are into the organizations like WHO, the climate change group where we sacrifice our industries and cash for a warm fuzzy as they laugh their asses off at us.

China does nothing until 2030 that will be their baseline. Until the, US industry will be forced to pay more for energy so they move to, GUESS WHERE, China.