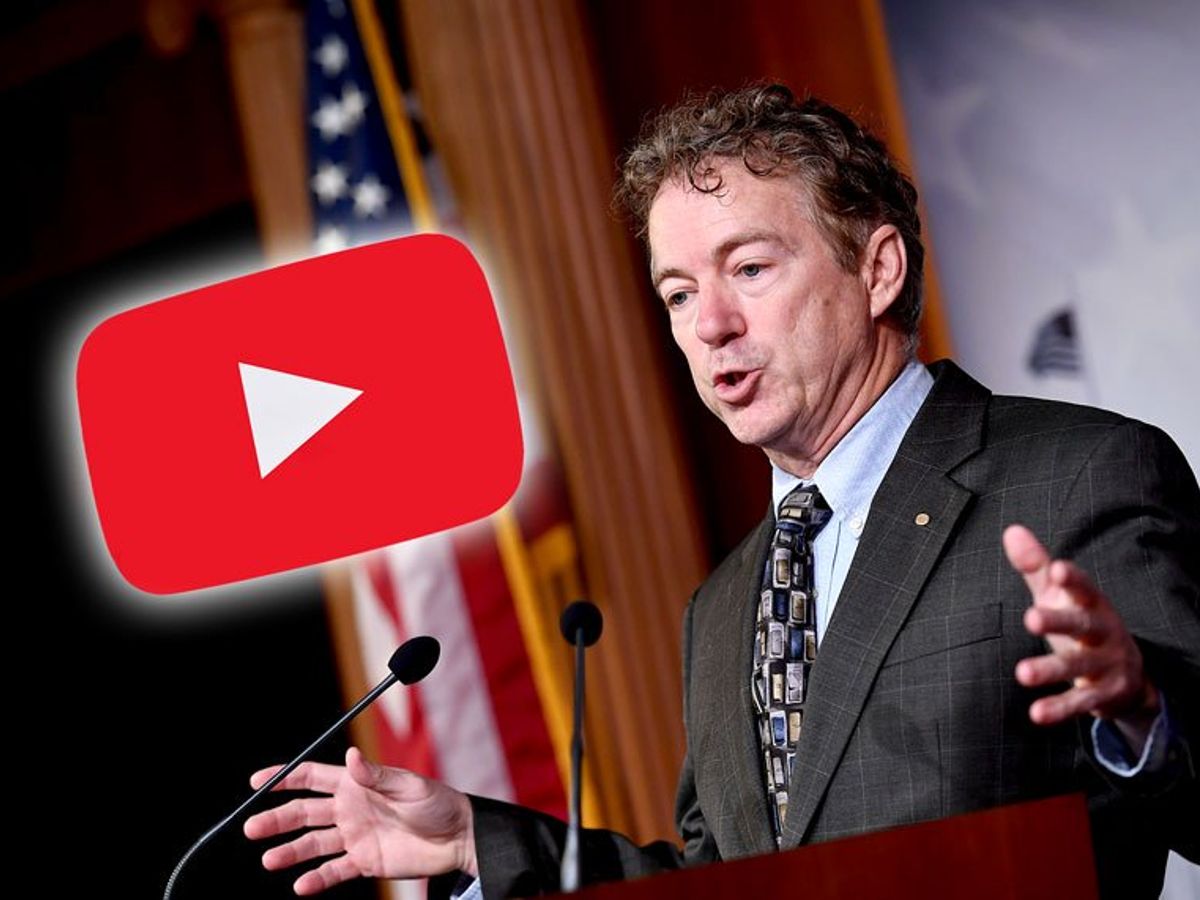 Senator Rand Paul (R-KY) has called out Google-owned YouTube after it blacklisted a clip of him speaking on the Senate floor, an act of censorship he calls “chilling and disturbing.” Google censored Paul because he read out the name of the alleged “whistleblower,” Eric Ciaramella.

Politico reported the story as “new,” even though Breitbart News first revealed that YouTube was blocking clips of the Senator mentioning Ciaramella’s name last week.

In a statement, Sen. Paul said:

It is a chilling and disturbing day in America when giant web companies such as YouTube decide to censure speech. Now, even protected speech, such as that of a senator on the Senate floor, can be blocked from getting to the American people. This is dangerous and politically biased. Nowhere in my speech did I accuse anyone of being a whistleblower, nor do I know the whistleblower’s identity.

A spokeswoman for YouTube, Ivy Choi, defended the company’s censorship of Sen. Paul in a comment, describing Ciaramella as the whistleblower:

Videos, comments, and other forms of content that mention the leaked whistleblower’s name violate YouTube’s Community Guidelines and will be removed from YouTube. We’ve removed hundreds of videos and over ten thousand comments that contained the name. Video uploaders have the option to edit their videos to exclude the name and reupload.

As Breitbart News reported last week, Sen. Paul made his comments on the floor of the Senate after Chief Justice John Roberts refused to allow his question to be read during the impeachment trial. In his speech, Sen. Paul said:

Manager Schiff and Counsel for the President, are you aware that house intelligence committee staffer Shawn Misko had a close relationship with Eric Ciaramella when at the National Security council together, and are you aware and how do you respond to reports that Ciaramella and Misko may have worked together to plot impeaching the President before there were formal House proceedings?

Explaining his argument further in a subsequent CNN segment, Sen. Paul said “I think it’s very important that we know if there was a concerted government plot to bring the president down by a lot of employees.”

Senator Rand Paul (R-KY) has called out Google-owned YouTube after it blacklisted a clip of him speaking on the Senate floor, an act of censorship he calls "chilling and disturbing." Google censored Paul because he read out the name of the alleged...

It’s almost as if YouTube is begging the federal government to revoke their CDA protection…something that’s long been overdue anyway.

Exactly. Either they are a platform or a publisher. They need to pick one. They can’t keep claiming to be a platform while they censor and edit content. That’s what publishers do. It seems like they only want to be a platform of free expression for their side and not for everyone. That’s not how the law works but I’m sure they already know that.

He’s full of shit, there’s all kinds of other ways that his speech is available to the public…

I’m claiming that his statement that the American people deserve to hear what he has to say insinuates that if YouTube doesn’t put it out there, they won’t get it. That’s bullshit.

Playing on Moral relativism again Monte? Always trying to divert the focus onto something else rather than choosing to discuss the topic in the OP? I think it is you that is full of shit and that is most of the time here!

It’s almost as if YouTube is begging the federal government to revoke their CDA protection…something that’s long been overdue anyway.

Totally agree. I was thinking about this recently due to the anti-trust investigation that is going on and why our elected officials are ignoring this; its probably due to the lobbying dollars their campaigns are receiving from Google in return to sweep this under the carpet. This needs to be addressed ASAP!

Online censorship is a major problem, especially when these companies claim to be public forums.

The thing is though YouTube shouldn’t be deleting content it doesn’t politically agree with. Right now they enjoy massive protections from lawsuits and the like because they are considered a platform - but the law says to be considered a platform you cant’s edit or omit speech. It was designed to keep the flow of information and discourse on the internet open.

YouTube will continue to successfully argue that they have a right to omit content that violates US law.

The CEO of YouTube bans a sitting US Senator from her video publishing service. Tell me again who has the real power in this country?