The 2S4 Tulip self-propelled mortar is 240mm wide and is capable of firing nuclear bombs, but it is likely this would be limited to ‘micro-nukes’ aimed at destroying an area the size of a football stadium

The weapon has been dubbed 'the sledgehammer

Dubbed “the Sledgehammer” the 2S4 Tulip - or Tyulpan - self-propelled mortar is 240mm wide - twice the size of NATO mortars which are 120mm.

Transported on its own tracks, it has a range of 12 miles and is used to obliterate large fortifications, military equipment, or troop positions.

It is capable of firing nuclear bombs, although it is likely this would be limited to “micro-nukes” aimed at destroying an area the size of a football stadium.

The heavy mortar weapon has already seen service in Afghanistan, Chechnya and Syria, with devastating effects.

Moscow’s commanders are desperately trying to hold back a ferocious counter-offensive by Ukraine’s forces all along the eastern front.

One security source told the Daily Mirror: “This is a huge weapon, devastating when using conventional weapons and capable of smashing a large area.

“But they will also be a very large target for Ukraine’s drone and artillery teams, who are hunting down Russia’s offensive equipment daily.

“The 2S5 is capable of targeting something from beyond its line of sight with bombs that would be very difficult, if at all, to deflect or intercept.”
The notorious Wagner Group of mercenaries - dubbed “Putin’s private army” - has suffered thousands of losses in the Bakhmut area of Donbas.

Most of Russia’s fighters in this area, scene of the worst fighting so far, are from Wagner Group, which has more than 50,000 soldiers in Ukraine.

It is feared President Vladimir Putin is poised to deploy a further 500,000 troops in a new mobilisation drive across the Russian Federation.

And Wagner Group commander Yevgeny Prigozhin has relaunched his recruiting drive in prisons across Russia, hiring murderers, sex attackers, and other criminals.

They are signed up in exchange for the promise of good pay and freedom from prison six months after they have fought in Ukraine.

The rest of the story depends on how much you trust CNN. 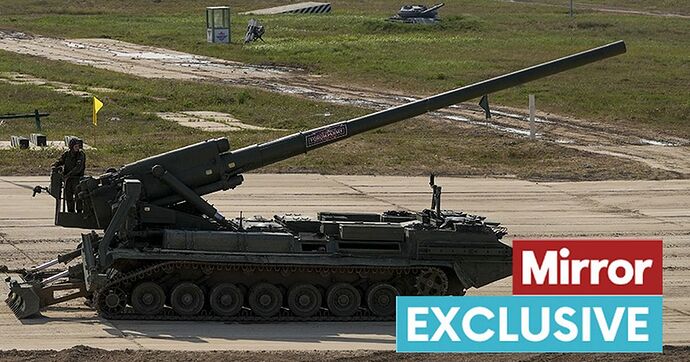 The 2S4 Tulip self-propelled mortar is 240mm wide and is capable of firing nuclear bombs, but it is likely this would be limited to 'micro-nukes' aimed at destroying an area the size of a football stadium

The Russians have all sorts of interesting weapons.
Vladimir Putin has approved the deployment of a deadly flamethrower known as a ‘poor man’s nuclear weapon’ to his private army.

The TOS-1A Solntsepek heavy thermobaric flamethrower is designed for the complete destruction of fortifications, armoured vehicles and enemy manpower – obliterating all humans in the vicinity.

The weapon is capable of vaporising everything within a 1,000ft blast radius, rupturing lungs and leaving no hope of survival with a blast temperature as high as 3,000°C.

Thermobaric ammunition has been described as ‘the most terrible [conventional] weapon in the world’, and has been dubbed ‘a poor man’s nuclear weapon’ by retired US colonel David Johnson.

Nuclear weapons obsolete? If you don’t care about the aftermath they ere quite effective. Obsolete? Must be why the Iranians are so hell bent of having their own.

Russia did not start all the talks about “nukes.”
The nuke hysteria was initiated by the west, particularly in DC.

Correct me if I’m wrong. Putin only said that Russia would “retaliate.”

Must be why the Iranians are so hell bent of having their own.

The Iranians and North Koreans know that the US will not attack a country with nuke weapons. Don’t blame Iran or North Korea for developing this terrible weapon.

Zelensky openly stated in November 2021 that Ukraine was seeking NATO membership and arming itself with nuke weapons. So don’t blame Russia for taking preventive actions with its special military operations.