By Guy Faulconbridge and Felix Light

MOSCOW (Reuters) -An ally of President Vladimir Putin warned NATO on Thursday that a defeat of Russia in Ukraine could trigger a nuclear war, while the head of the Russian Orthodox Church said the world would end if the West tried to destroy Russia.

Such apocalyptic rhetoric is intended to deter the U.S.-led NATO military alliance from getting even more involved in the war, on the eve of a meeting of Ukraine’s allies to discuss sending Kyiv more weapons.

But the explicit recognition that Russia might lose on the battlefield marked a rare moment of public doubt from a prominent member of Putin’s inner circle.

“The defeat of a nuclear power in a conventional war may trigger a nuclear war,” former Russian President Dmitry Medvedev, who serves as deputy chairman of Putin’s powerful security council, said in a post on Telegram.

“Nuclear powers have never lost major conflicts on which their fate depends,” said Medvedev, who served as president from 2008 to 2012.

Striking a similar tone at what he described as an anxious time for the country, the head of the Russian Orthodox Church said in a sermon for Epiphany that trying to destroy Russia would mean the end of the world.

Medvedev said NATO and other defence leaders, due to meet at Ramstein Air Base in Germany on Friday to talk about strategy and support for the West’s attempt to defeat Russia in Ukraine, should think about the risks of their policy.

Putin casts Russia’s “special military operation” in Ukraine as an existential battle with an aggressive and arrogant West, and has said that Russia will use all available means to protect itself and its people.

trying to destroy Russia would mean the end of the world.

Who has been trying that? The same usual suspects.

Russia tried to negotiate with the west (and Ukraine) a number of times since 2014, but it’s the west who deceived Russia repeatedly. Russia cannot be blamed for not trusting the west anymore.

“The defeat of a nuclear power in a conventional war may trigger a nuclear war,” former Russian President Dmitry Medvedev, who serves as deputy chairman of Putin’s powerful security council, said in a post on Telegram.

The spectre of nuclear war has loomed over the Ukraine conflict after Putin’s war machine was crippled by the fierce Ukrainian resistance - sparking fears the tyrant could use nukes to break the deadlock.

But UK defence secretary Ben Wallace has tried to pour cold water on the growing fears, describing the situation as a “battle of rhetoric”.

He told BBC Breakfast: “This is predominantly about Putin putting it on the table just to remind people, remind the world, that he has a deterrent.”

Although experts said the chance of Putin using nuclear weapons to spark a world war is unlikely, there are signs Putin could be preparing to start a nuclear conflict.
One of Putin’s special so-called Doomsday planes for use in the event of a nuclear war with the West has been seen flying around Moscow in recent days.

A chilling video showed the Ilyushin Il-80 passing low over the outskirts of the capital.

The windowless Il-80 is one of four planes designed to act as a flying Kremlin in the sky in the event of a nuclear attack.

Putin would be able to rule Russia and issue commands to his military – including ordering nuke strikes - from the airborne command post.
Putin has also been spotted several times around what appears to be Russia’s secret nuclear briefcase.

Last month, he arrived at the Vostochny Cosmodrome via helicopter to visit a space port with Belarus dictator Alexander Lukashenko.

Putin arrived on the scene accompanied by his top military henchman who were seen carrying the alleged launch device - just days after it was snapped at a state funeral.

The secret case is thought to contain the launch apparatus for the Kremlin’s strategic missiles and its presence at the funeral is seen as a chilling threat to the world.

The bag, which has a personalised key code, is normally under 24/7 supervision and completely controls Moscow’s nuclear arsenal.

It is reportedly supervised by an armed security officer who accompanies no-nonsense Putin wherever he travels.

The briefcase, called Cheget in Russian, was developed in the early 1980s and was shown to the world for first time in 2019, with its contents being viewed up close on TV.
According to local media, there are actually not just one but three in total.

Its visible presence in recent weeks is thought to be a chilling sign that the crazed Russian leader could deploy devastating nuclear weapons at any time.

Russian state TV has threatened to drown the UK under a radioactive tsunami in a bizarre propaganda video.

In the chilling broadcast the presenter also showed how the Kremlin’s latest world-ending Satan 2 nuclear missile could also annihilate Britain.

Brazen host Dmitry Kiselyov heralded Russia’s second option to “plunge Britain into the depths of the sea" with its “underwater robotic drone Poseidon”.

In a chilling graphic he warned the missile would raise a giant tsunami wave up to 1,640ft high.
Pro-Putin TV pundits have also previously threatened the use of the world ending RS-28 Sarmat missile – gleefully spouting its ability to wipe England from the map.

Putin boasted that his apocalyptic “Satan 2” nuke missile can “break through any defences”.

The tyrant said the world-ending RS-28 Sarmat would “force those who try to threaten Russia to think twice”.

The deadly projectile can fly over 11,000 miles, carry 15 warheads and has the potential to destroy an area the size of the United Kingdom in a single strike.

It’s said to be the world’s longest-range intercontinental ballistic missile.

The separate warheads are capable of detaching from the main 100-tonne missile before travelling towards their target at hypersonic speeds.

The bombs are 1,000 times more powerful than those dropped by the US on Hiroshima and Nagasaki in Japan during World War Two.

Putin said: "The missile can break through all modern anti-missile defences.

“There is nothing like this anywhere in the world, and won’t be for a long time.”

to rule Russia and issue commands to his military –

I checked that for you

The defeat of a nuclear power in a conventional war may trigger a nuclear war,

He is talking about the US, not Russia. 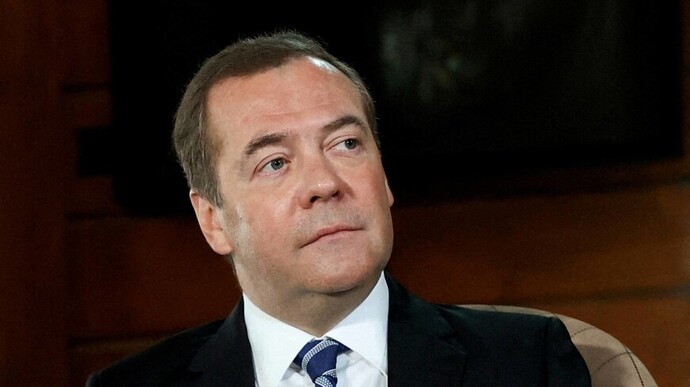 It was the latest in a long line of shocking and provocative statements from Medvedev, who was once seen as a Western-leaning reformer but has reinvented himself as an arch-hawk.

He appears more hawkish now, and I don’t know his relationship to Putin at the moment.

The US, ruled by Zionist Neocons, is much more dangerous than Russia or China.