Police in New Mexico arrest suspect in string of killings of Muslim men, 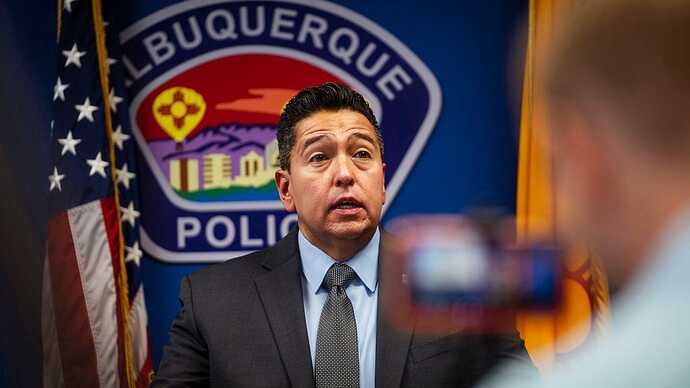 Police in New Mexico arrest suspect in string of killings of Muslim men,...

Albuquerque NM has a long history of violence but now, Muslim on Muslim murder. Appears to be the new norm.

Are those called honor killings .

The only real honor killing would be if an honorable decent Muslim killed another Muslim advocating or carrying out terrorism against innocent people. Sadly, that doesn’t seem to happen.

NOTE: I am not advocating anyone, even a Muslim, taking the law into his own hands. If you know of someone advocating terrorism or doing it, turn them in. But that too doesn’t seem to happen very often.

does that included Northern Ireland Catholics?

If you know of someone advocating terrorism or doing it, turn them in.

Only if you want to be labeled a RACIST .

If You See Something and Say Something, You’ll Probably Get Called a Racist (townhall.com)
Victor Stevenson - a black man who owns a San Francisco lemonade business called Gourmnade - was standing outside his shop last June before business hours, on the phone with his security company when four police officers approached him. Turns out, someone who thought Stevenson was breaking into the business had called the police.

Stevenson cooperated with the officers and, even by his own account, they were polite and professional to him. He had to provide identification and prove that he was indeed standing in front of his own business, but other than that nothing else was hurt but his pride.

But unfortunately, the race of those involved made what should have been a non-event a national story.

In a similar “newsworthy” incident a month earlier, real estate investor Michael Hayes, a black man, was pulling a board off the front of an abandoned Memphis home when a white neighbor confronted him. He told her he was an investor who had a contract on the house, but the woman, considering that a likely story, called the police anyway.

When they arrived, the police did the proper thing and didn’t arrest Hayes, but that didn’t stop him from assuming the initial call was about race.

“This type of stuff is still going on,” Hayes said in a video he recorded. “You know why the lady called the police on me."

Because we’re all supposed to assume no malfeasance whatsoever when a person of any color pulls boards off a house in a blighted neighborhood.

This time, the caller defended herself against the accusations.

“I’m Spanish,” Tiffany Albert told a CNN affiliate. “My boyfriend is black. It’s nothing racist about it.”

Albert told reporters she didn’t want to see the boards removed because the house had been used to do drugs and it had taken residents a long time to get the city to board up the houses in the first place.

Stevenson and Hayes are merely two examples in a much larger recent media craze - the desire to portray any call to police from a white person reporting on a black person that ends up being a non-crime as somehow being racially motivated, a “hate crime” even. And disturbingly, that craze is turning into a call to prosecute the callers.

“I could be wrong but I’m almost 1000% sure this was racially inspired,” Gourmnade owner Stevenson told CNN. “It’s the caller that’s the criminal here. They should be the one being questioned.”

“People die because of this kinda misuse of police resources and racial profiling every day,” Stevenson said. “I’m just blessed to be alive to tell my story and hopefully can help spark some major changes in how these situations are handled. It’s a criminal act and should be treated as such.”

By “it,” Stevenson meant calling the police on someone based on race, because apparently no black man standing in front of a business during off-hours would ever be up to no good, and even if they are up to no good you’d better not call police on them, especially if you happen to be white - or something.

And it’s more than just an empty threat. If New York State Senator Jesse Hamilton gets his way, anyone who calls police on “black people going about their business” will be charged with a hate crime.

The law, according to Patch.com, would “criminalize 911 calls against people of color without evidence of malice.”

“That’s gonna be a hate crime,” said Hamilton. “This pattern of calling the police on black people going about their business and participating in the life of our country has to stop.”

Instead of the laws against filing false reports that already exist, Hamilton’s proposal would charge and prosecute individuals who call the police “with the preconception that the person might cause a threat,” Patch reports.

“Under the new law,” writes Kathleen Culliton of Hamilton’s proposal, “the Oakland woman who called 911 to report a barbecue, the Philadelphia Starbucks manager who had two customers arrested and the Yale student who reported a fellow student for napping could be charged and prosecuted, had they called 911 in New York State.”

“Waiting for your friends at a Starbucks is not a 911 call,” said Hamilton. “It’s a call of intimidation.”

In addition to investigating real crimes, police would also be charged with determining the motives behind 911 callers who call them on possible perpetrators who happen to be members of minority groups.

In an article for Vox published in May entitled, “Why white people keep calling the cops on black Americans,” Vesla Mae Weaver opines: “Most white Americans have little doubt about the distorted responsiveness likely to occur when they call the police on black people. They know, without having read the scores of studies on the subject, that whites are seen as more law-abiding by officers of the state, and that blackness itself is construed as suspicious and threatening.”

I think what Weaver should have written is that society is filled with paranoid little white ladies who call police on anything that moves. In many instances perhaps they should mind their own business, but that doesn’t make them racist. Seriously, what media outlets are following the false reports called on non-black people? Are we truly to believe there are none?

Why Liberals Had a Chernobyl-Level Freakout Over WaPo’s Headline About Trump, the FBI, and Garland

It’s easy to point to extreme examples, like the Vox-mentioned white graduate student who called campus police on a black female student napping in a common area, the two black men who had police called on them for playing basketball at a gym one of them was a member of, and the three black teenagers wrongfully accused of shoplifting at a St. Louis Nordstrom Rack, as evidence of some sort of societal racism at work that needs to be somehow rooted out with another draconian law.

But what of such a law’s unintended consequences? In a society where the worst sin imaginable is being perceived as “racist,” might automatically tarnishing anyone who mistakenly calls police on a member of a minority group with that brush cause people to hesitate when they should be taking action? Whatever happened to “if you see something, say something?”

What’s more, in a society where, sadly, a stunningly disproportionate number of actual crimes ARE actually committed by minority group members, might such hesitation eventually cause unnecessary loss of property or even serious harm or death?

Think it won’t happen? Already, the years-long portrayals of police as racist when a minority group member gets shot is taking its toll. A recent Washington State University study called “The Reverse Racism Effect” showed that observed police were actually “slower to shoot armed Black suspects than armed White suspects, and they were less likely to shoot unarmed Black suspects than unarmed White suspects.”

It even has a term - “The Ferguson Effect.” Coined by researcher Heather MacDonald, it refers to the post-Michael Brown tendency of cops to hesitate when confronted by black suspects for fear of media scrutiny and being labeled with the dreaded “racist” moniker.

It’s why a 17-year female police veteran allowed herself to be pummeled repeatedly into the concrete by a drug-addled black suspect rather than draw her weapon.

If trained police are susceptible, is the general public far behind?

What we have in most of these cases – police being called on a Black person where they would not have been called were the person white – is an example of ‘statistical racism’. There is also ‘statistical age-ism’ and ‘statsitical sexism’.

So if I see three elderly Chinese women at night looking into parked cars, I will have a different reaction than if I see three young Black men doing the same thing.

It’s unfair, but it’s based in reality.