The current Iran conflict has basically already begun as the US President ordered an air-strike on an Iranian general. However, many people are saying that this is going to be “World War III,” and I’d like to say they’re wrong.

While the conflict might at the most end up in multiple countries forming a coalition to attack Iran, the chances of it catching the world on fire are basically zero. This is a US-Iran conflict, and although many countries have condemned the airstrike on Soleimani, they’re not going to declare war on the US.

First of all, attacking the US would be very risky. NATO would probably respond pretty quickly if you were to declare war on the US, which means that you have to fight NATO and the US at the same time just to stay alive, and nobody is going to want to risk that happening.

And if you do risk it and win, the casualties you’d suffer would be pretty high making it a pretty pointless and drawn-out war.

So no, it’s not world war III.

WWIII has been on for decades.
It’s a war between the peoples of the world and the ruling elite.
I don’t know where you live but in many parts of the world there’s something called chemtrails which are nothing but toxic materials sprayed on people living below.

As some historians point out, WWI and WWII never ended.
And Germany was never the real enemy of America. “War” with Iran is only a facade.

I think this entire skirmish has been great for the lagging ratings of the mainstream media. This is not going to turn into a full-blown war. Iran will get through their 3 days of morning, they’ll flap their gums, and that will be that.

This will have ramifications. There will be real counterattacks across the world for this as well as false flag ones to get the world behind an invasion of Iran.

I think this is bait for WW3, one person died really, an emotionally charged person. Iran is scaring the shit out of the ■■■■ and the ■■■■ are trying to force their hand in attacking the US. Iran just needs to not take the bait. The Ayatollah said as much today, that Qud’s forces will not deviate from their established goals so I don’t think anything will come of it except Iran will keep surrounding Israel with troops. That’s my sense of it from a good safe distance down under.

I’m familiar with the Beruit Marine barracks bombing and I think a hijacked and detonated airliner, all very long ago, under different leadership.

I perceive the Persians to be more logical than Al Qaeda or ISIS extremists - Iran is an actual nation state. I think they will coordinate with Russia and or China to come up with a response. Goal being a measured response that won’t invite a U.S invasion or bombing of the Iranian state.

But who knows tbh.

This all goes back to the PNAC

They were serious about taking down those 7 countries.

We’re going on 20 years (their plan was 5) and they will do whatever it takes to make it happen.

Once Greater Israel is established, America is brown, white people are zoned out on Oxy and can’t produce any more, and our greatest ally has vacuumed as much wealth out of America as they deem feasible, there will be a giant diaspora of ■■■■ returning back to Israel which will be completely walled off and defended by American donated weaponry and armed American soldier-peasants.

You better buckle up. Iran did 9/11 now. It was nice of VP Pence to say so after we fired a bunch of rockets off. Freedom. 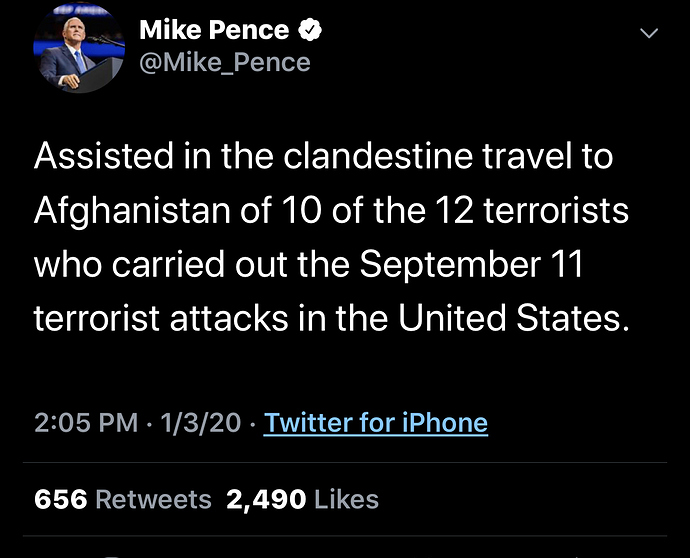 I’m familiar with the Beruit Marine barracks bombing and I think a hijacked and detonated airliner, all very long ago, under different leadership.

Most of our continued animosity since then, in absolute and complete seriousness, is related to Israel.

lol oh yeah, did we mention Suleimani also did 9/11? Sorry we never mentioned that until after we killed him

Yeah - maybe it ain’t WWIII but now we got aliens getting involved. We just went full intergalactic. 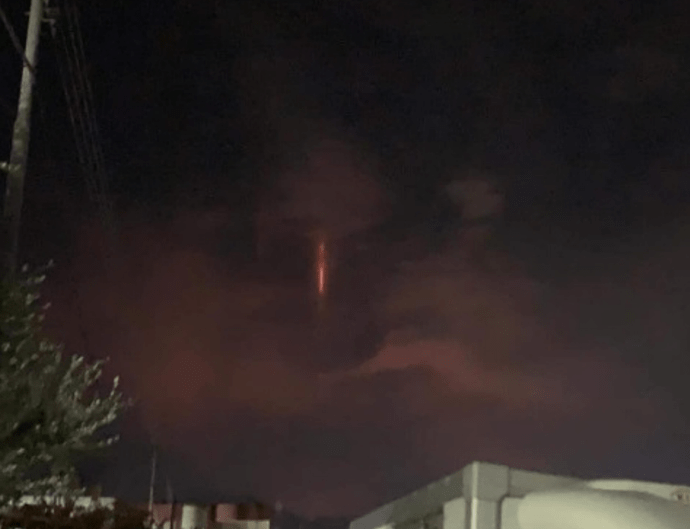 I think they will coordinate with Russia and or China to come up with a response.

Nope. They won’t be doing that. They sent their little letter to the UN and Russia vetoed it. 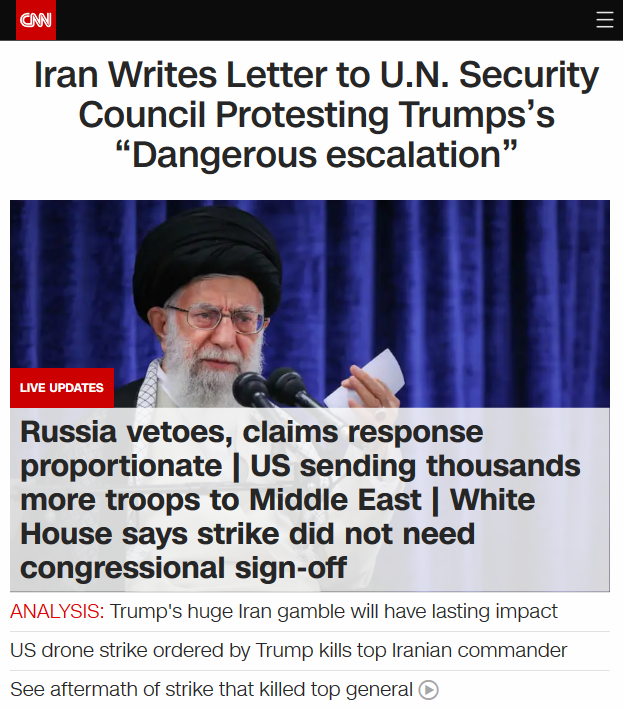 This began over 40 years ago.

This attack in particular was in response to an attack on a US base killing one American and wounding others and then following it up with an attack on the US Embassy.

The number one and two commanders responsible for those attacks were properly and summarily killed for going too far.

Digi, for once in your life stay on the topic. This isn’t about WW1 or WW2.
The Towelheads know they could never win a war against the U.S. They could inflict alot of casualties and POSSIBLY resort to kamikaze type attacks.
As I said in other comments, their Air Force would be lucky to last 24 hrs. Then its lights out on the Air Defense systems.
This could also be a message to Lil Kim if feels brave enough.

If Iran wants a knockdown drag out we can and will destroy all of their offensive capability inside of a few weeks.

Target all of their aircraft.

Target all of their major miiltary formations.

Target all of their command and control.

Target all of their supporting infrastructure.

Put their Navy on the bottom of the sea.

Destroy all of their anti ship shore batteries.

The anti shipping capability and air force could be destroyed almost completely in the first 72 hours.

There won’t be a WWIII. The highest form of revenge they will probably do is maybe through 3rd parties, finance terrorist groups that might kill a few. Other than that…any form of explicit violence towards America and its citizens will provoke extreme repercussions of which they will win nothing from .

This apparently is not a won and done deal. 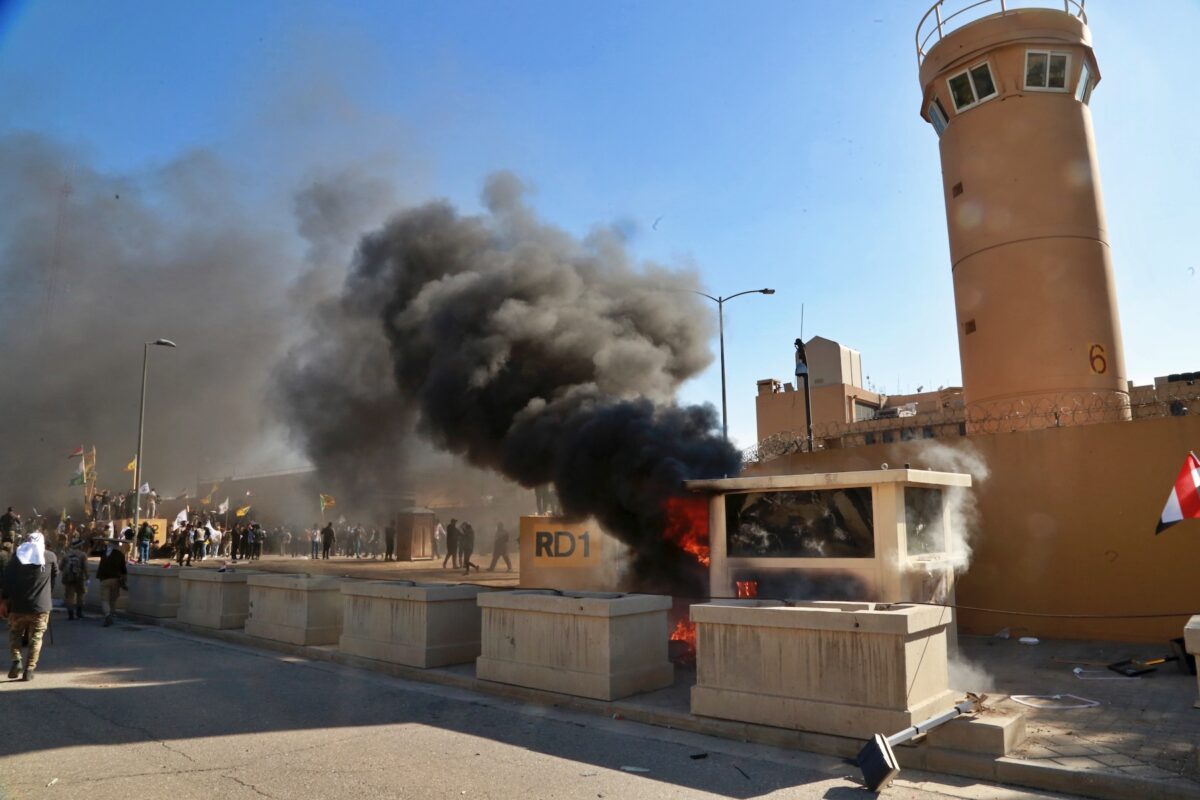 Airstrikes on Friday night hit an Iraqi militia convoy north of Baghdad, killing at least six people, according to reports.

The anti shipping capability and air force could be destroyed almost completely in the first 72 hours.

I have a sense the unintended consequences for this hit will be very severe. Trump has no historical or geopolitical knowledge, only his primitive ‘gut’ instinct–you hit me, I hit you 10x harder. That thoughtless instinct might work in the schoolyard but now this narcissist is playing games in the real world with very real and deadly reactions.

This man is going to get us all killed with his ignorance and juvenile vindictiveness.

That’s not saying that Soleimani was a good guy; he had plenty of blood on his hands. But the ramifications of this action, the tension in the air?

Not good. Not good at all.

No, we’re good, but not perfect and they have their aircraft widely dispersed.

Much of their shore defenses are also protected by very heavy bunkers some of which would almost certainly require follow up strikes.