Netherlands Police Open Fire on Citizens and Other Uprisings from Around the WORLD!

You can’t compare the riots in Seattle / Portland with protests in Europe and Australia.

Of course you can. They are both riots, in both cases the police are being attacked and public/private property is being destroyed. VERY disingenuous and hypocritical for you to refer to one as riot and one as protest….

You compare anarchist burning down buildings attack cops, destroying black neighborhoods for no reason at all, to fighting for the right to not force the government to stick me with a needle? Seriously

Well yeah, I totally agree. And in both the Seattle/Portland riots and the Rotterdam/Brussels riots they are expressing their grievances criminally. My point is that the Seattle/Portland riots are regularly criticized here at PB while the Rotterdam/Brussels riots are being celebrated. You too fail to see the hypocrisy in this???

What were they “protesting” in Seattle and Portland during the “summer of love”?

The left has cherry picked MLK’s Riots ‘are the voice of the unheard’ to justify every riot by shtifaced Antifa squads bused into cities across the country.

As always the Montecrusty’s strawmans argument with the use of false equivalencies to boot! No wonder why everybody thinks your a clown! Holy crap you invent a new kind of stupid every day here!

What people are protesting is not the problem. People are allowed to protest and express their grievances. It’s not protesting, but criminal rioting when people attack the police and public/private property in as is the case in both the US and European riots. The problem at PB is perennial hypocrisy. The US riots are condemned by you guys while the European riots are celebrated….

At some point it would be great if Blacks figured out that career criminals are not heroes because they die resisting arrest.

Well that’s clearly offensive, but I’m not surprised. Many many white people also marched and participated in the hundreds of protests across America last year, we’re pissed about police over reach also. And I’ll point out that most all of the protests around America were peaceful, but of course they all are viewed by the few like Portland and Seattle that became criminally violent….

These ppl protesting (white black green) always support Democrats, so they riot in a Democrat run city, demand the racist ppl in command step down or we keep rioting, then in the next election vote Democrat lol

It’s makes no sense to anyone. If they want change put the weed down, stop being a brain dead moron and vote for the best party. Republican

The US riots are condemned by you guys

The extended riot and takeover of a city quarter was praised as “the summer of love” by liberal politicians. That’s where the problem is.

These actual rioters of the Left Coast were nothing but useful idiots.
These criminals never experienced what the Europeans went through. Months and months of lockdown.

You have to give the Europeans a little allowance for their frustration. However, some of those who attacked the police obviously were refugees and criminals for whom I have no sympathy.

The extended riot and takeover of a city quarter was praised as “the summer of love” by liberal politicians. That’s where the problem is.

Nope, that’s NOT where the problem is relevant to our discussion here, (though I disagree with those liberal politicians) the problem that you’re trying to run away from is me holding you to your double standard.

The rioters, let’s call them what they are, in Seattle/Portland and Rotterdam/Brussels, are attacking the police, and destroying private and public property. So, objective people call out the criminals in both, not just one while celebrating the other….

Anybody who tries to differentiate what is just in terms of protests and riots are people who are out of touch with reality and have no grounding in their views. They often come here with their conflation and false equivalencies in order to apply some type of high moral supposition that they pretend to care about. What they fail to see, is that any rioters, or protests given the current climate we are experiencing there is going to be chaos and destruction of property. Yeah, we don’t like see such destruction but the reality is whenever civil society is in the process of breaking down casualties and collateral damage is going to be inflicted whether its intentional or not, its just part of reality, a reality that some here choose to be purposely obtuse about in order to conflate their fake moral outrage. They don’t live in this thing we call life, they continue or desire to live in this idealistic world view that is detached from any reality altogether. The pot calling the kettle black is a normal standard for some here so take it with a grain of salt as the cliche is expressed infinitum .

The protesters, be it in the Netherlands, England or Australia, did not attack and destroy personal properties, driving businesses out of town.

I don’t think monte has a iq high enough for a sneaker size.
He doesn’t understand the difference between freedom fighters, and anarchist. Democrats rioting and then voting for the SAME DEMOCRAT they just burned there city down…

If there was one telling insight into the rioting in the Dutch city of Rotterdam that flashed on to TV screens all over the world last Friday night, it was this: according to police, at least half of those running amok on the streets were “under age” – that is, under 18.

As the mayor of Rotterdam, Ahmed Aboutaleb, pointed out, this meant two things.

First: they were not principled anti-vaxxers or civil liberties advocates giving vent to legitimate frustrations at how the government has handled the coronavirus pandemic.

Second: they were not even the same people who routinely turn up to largely peaceful weekend anti-lockdown or anti-vaccination protest marches in Amsterdam and some other cities. Far from it. They’ve hijacked the protesters’ cause. 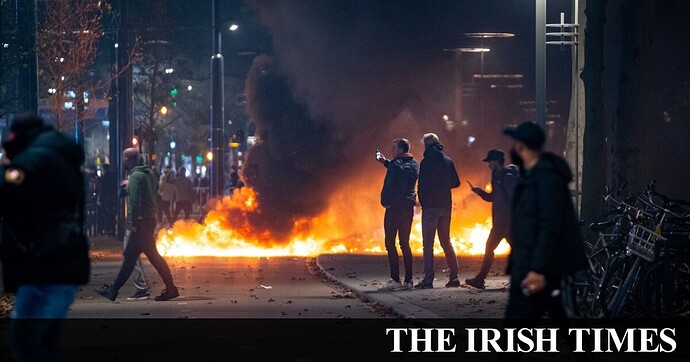 Who were the rioters who smashed through Rotterdam and The Hague?

It’s really sick and twisted that you guys defend and celebrate the exact same thing you criticize in America.

On Saturday night, the Netherlands saw protests at The Hague, with demonstrators lighting fires throughout the area, DEFACING PROPERTY and pelting officers with rocks and fireworks, according to police. The disruption went on until around 1 a.m., and police took 19 people into custody before the night was over.

That demonstration also ended with five officers injured, according to the Associated Press. One officer suffered a knee injury as well as a concussion, and others sustained hearing damage, police said on Twitter. exact behavior you criticize in America….

Protesters in Europe don’t drive a car or van into a parade targeting children.

You’re conflating two Wholly different events, for one, and for two you’re insisting on referring to the European rioters who have attacked and injured police and damaged property as protesters, I cannot have a debate with you until you hold the European criminals in the same regard as the American criminals….

European police won’t let you buy fucking food … are you this empty?