For anyone curious: Netflix achieved woke-ness a while ago, and are in the process of going broke, such as the curse demands. 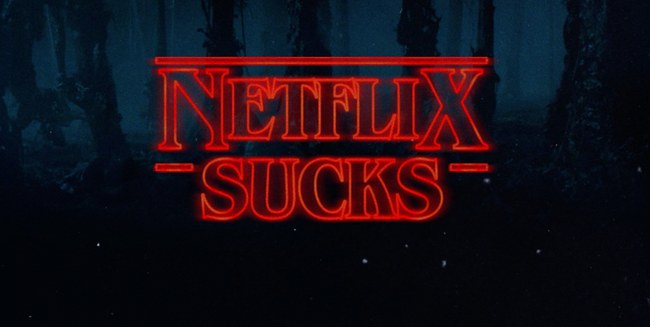 This is great news! What this says to me is that people are waking up to realise that they have slowly been conditioned to accept things that the Marxists put into their productions! For example Gays and Lesbians and the emotive LBGTQ is over represented and people are getting tired of this! Of course the latter example is only exacerbated when pink haired dikes “R Am A Hoe” disrespects a nation to the rest of the world, Netflix decline is the gift from Karma!

Must be over 18 months ago that I cancelled. The programming had become disturbing. And then they announced that they were striking a deal with the Obamas. I cancelled instantly.

Politics aside, Netflix was big as they are now bc they were one of the only one of their kind back then (and Hulu for some bizarre reason insisted on ads even tho you paid for the subscription).

Now that there are more competitors (HBO now, Disney+, Amazon Prime videos etc), not only did they hike up the price, but they pushed woke programming while ruining their sucessful existing franchise (rip Stranger Things). Not worth the price hike.

I contend that is was HBO that set the standard in terms of the mini series and high production values that Netflix and others followed. Everything else you said I agree with!

I meant, Netflix was big in the ads-free streaming space. HBO shows are always high in production values.

They were great when they were the alternative. First it was p2p sharing like Bittorrent that changed things up. I didn’t have to be at my tv at a certain time to watch my favorite shows, mostly because I was working at the time. I could watch them at my leisure. Then Netflix came along, where I could watch them at my leisure, and the shows that I liked were making money off my subscription. Which is more than fine by me. I believe that you should always pay for content/entertainment that you like. If everyone steals, then nobody gets paid.

Now they’re becoming more like Hollywood, which I swore off years ago. The only movie I’ve actually paid to see in a theater was The Big Short (fucking awesome movie btw). The one before that? The second Batman movie with Christian Bale as the Batman. The next one? Probably not likely. Well, lol, maybe another Christian Bale movie because his method acting is second to none.

Now I just donate to my favorite online streamers. I don’t believe that a show should always bow down to the whims of its audience, it should damn well pay attention to what they like.

It’s the same old crap throughout history though. Some group or organization gets so inflated, that they become deluded into believing that they can’t lose. WRONG! I hope MSM learns this lesson the hard way. The VERY hard way.

Of course but HBO started the trend Long before Netflix and others started adopting similar formats! In fact HBO was a Pioneer in the cable subscription market share before there was Cinemax, The Movie Channel, Starz and others. I am not sure how old you are and if you were alive when HBO first became a thing but I was around to witness it! The first movie I watched that was featured on HBO was “The Gumball Rally” were watching some guy exposing his ass out the window was shocking for me to watch while being 9 years of age at the time! My how things have changed!

Also for the record HBO too has seen some decline in recent years due to their suggestive innuendos placed in many of their storylines. Bill Maher for example and the platform he gets only displays HBO’s political slant and their subtle approaches to influence an unsuspecting audience.

No surprise here. Quality of content is declining rapidly while agenda pushing new hires will do little to change that.

Just turn off your TV entirely, it’s all horse shit.

At the very least, disconnect the reception cable and only use your TV for consuming alternative media and political commenters, and for browsing free speech media