Government watchdog Judicial Watch has reported several times over recent years the existence of a route through Mexico and across the U.S. southern border for ISIS terrorists, as well as on an ISIS training cell in Mexico just a few miles from El Paso, Texas.

Those reports now have been confirmed by no less than a captured ISIS fighter, according to the organization’s newest documentation.

WND has cited the Judicial Watch reports over the years and in fact documented only a few months ago reports of prayer rugs being found.

Those rugs, typical of those used in Islamic worship, were found by ranchers and farmers near the U.S.-Mexico border and suggest Middle Easterners are penetrating the southern frontier.

The Washington Examiner, reporting from a New Mexico border town, spoke to a rancher who asked to remain anonymous for fear of retaliation by cartels.

“There’s a lot of people coming in not just from Mexico,” the rancher said. “People, the general public, just don’t get the terrorist threats of that.

Now Judicial Watch is reporting a captured ISIS fighter is giving details of a plot in which “jihadists enter the country through the southern border to carry out an attack.”

“The terrorists begin their journey in Central America and exploit vulnerabilities in the Mexican border to reach the U.S., according to Abu Henricki, an ISIS soldier captured by the Syrian Democratic Forces in Rojava, Syria,” Judicial Watch reported Tuesday.

“Henricki and 160 of his fellow terrorists were interviewed at length by a research group called the International Center for the Study of Violent Extremism. The nonpartisan organization published its findings recently in an alarming report that includes a video of the interview with the captured terrorist, who is Canadian and has dual Trinidadian citizenship.”

According to that report, Henrick explained, “They were going to move me to the Mexican side [of the U.S. southern border] via Puerto Rico. This was mastermind[ed] by a guy in America. Where he is, I do not know. That information, the plan came from someone from the New Jersey state from America. I was going to take a boat [from Puerto Rico] into Mexico. He was going to smuggle me in.”

The researchers’ report shows some fighters were to travel from Syria. 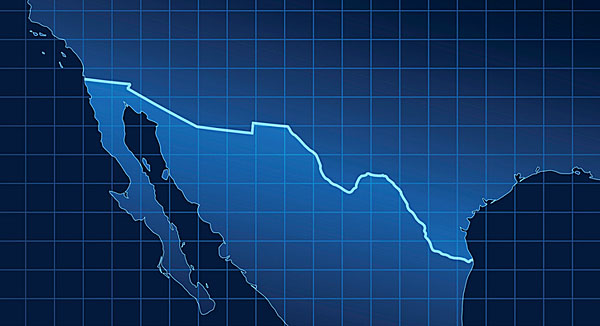 Government watchdog Judicial Watch has reported several times over recent years the existence of a route through Mexico and across the U.S. southern border for ISIS terrorists, as well as on an ISIS training cell in Mexico just a few miles from El...

It is naive to think that terrorists have not been taking advantage of our porous southern border. All that is required for free passage through Mexico is money.

So far though whatever they’ve been doing it seems mainly it’s leaning towards either training/equipping existing jihadis already in the US or perhaps building sleeper cells for future actions.

Don’t worry, unless and until attacks are actually launched within the US nobody will much care and when they are launched it will all be Trump’s fault for focusing on Illegal immigration instead of counter terror operations.