If you drink coffee, disaster awaits you

Solved: The Mysterious Origins of Your Coffee’s Worst Nightmare

Researchers inspected 18,667 plant specimens to track down a caffeine-eating beetle.

Solved: The Mysterious Origins of Your Coffee’s Worst Nightmare 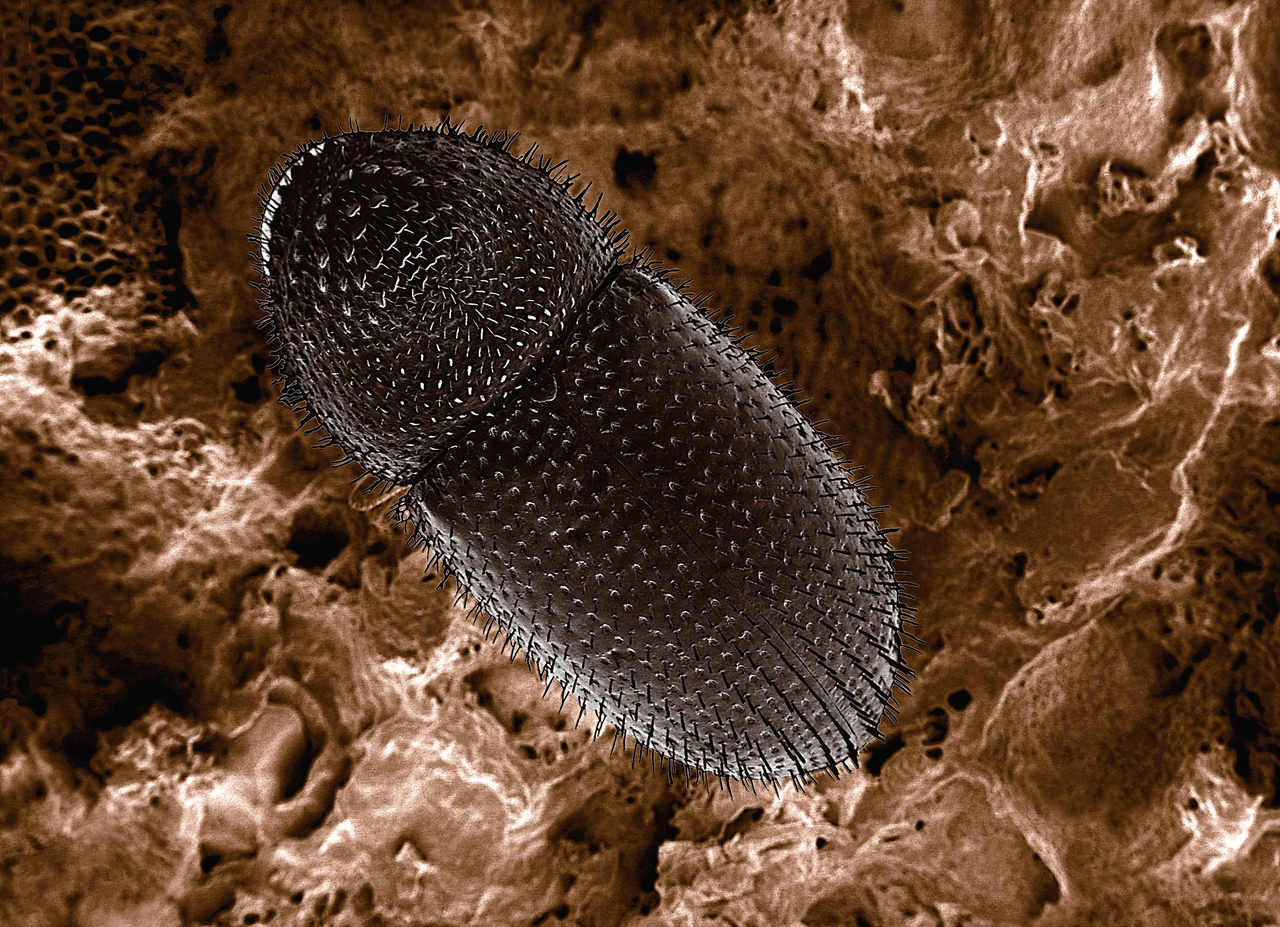 A close-up of the coffee berry borer, guaranteed to haunt your dreams. COURTESY OF ERIC ERBE AND FERNANDO VEGA 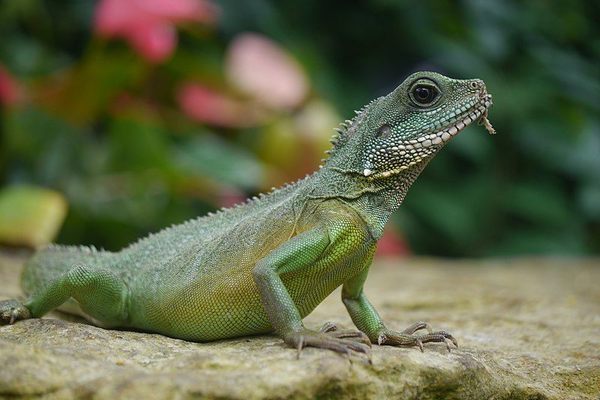 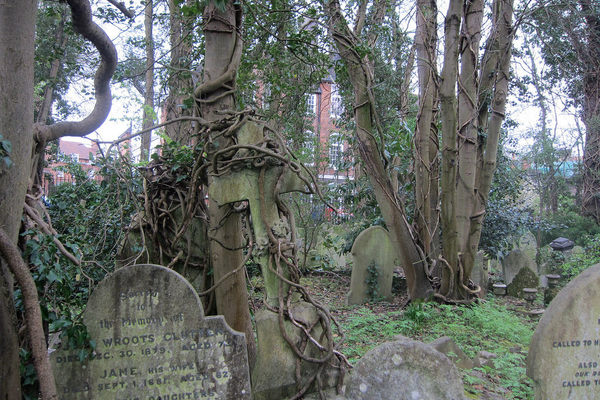 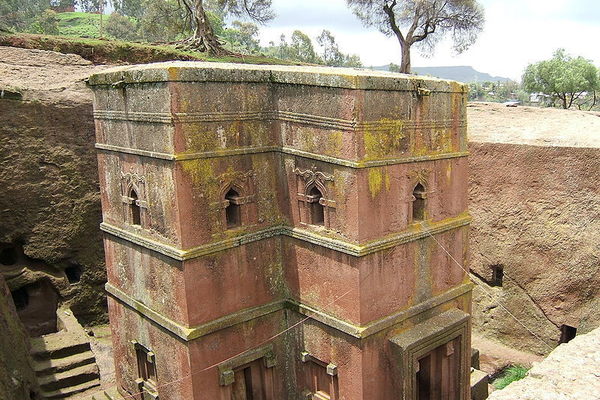 IN THE 1910S, COFFEE CROPS around the world began to suffer a mysterious ailment. When plucked from the tree, the coffee fruit, usually plump and crimson, was riddled with round holes, and the damaged beans inside were nearly useless. Growers soon discovered that the culprit was a small beetle, the coffee berry borer, which has spread through the world like a caffeine-eating plague. Where did it come from? How could growers eradicate it?

Almost a century later, the berry borer’s path of destruction continues unabated. It’s responsible for around $500 million in global damage each year, including $300 million worth of damage in Brazil alone. And it’s proved impossible to eradicate. “It’s been studied for over 100 years,” says Fernando Vega, Research Entomologist at the USDA’s Agricultural Research Service, who has been studying the berry borer for decades. “Orthodox techniques don’t work.”

That’s because the coffee berry borer is an expert at evading detection. “It’s one millimeter across,” says Aaron P. Davis, a Senior Research Leader and coffee expert at the U.K.’s Royal Botanic Gardens, Kew. “It’s like one speck of dirt on your finger, yet it causes terrible damage.” And it lives almost its entire life cycle within the cozy confines of the coffee berry, where—thanks to its ability to digest large doses of caffeine, a rare trait in insects—it’s born, feasts, mates, and perishes. “The male doesn’t have wings; it dies in the berry. All it does is mate with its sisters,” says Vega. “When they crawl out, the females are already impregnated.” Then, the lady borer enters another coffee berry, where it gives birth, and its offspring eat, mate, rinse, and repeat. 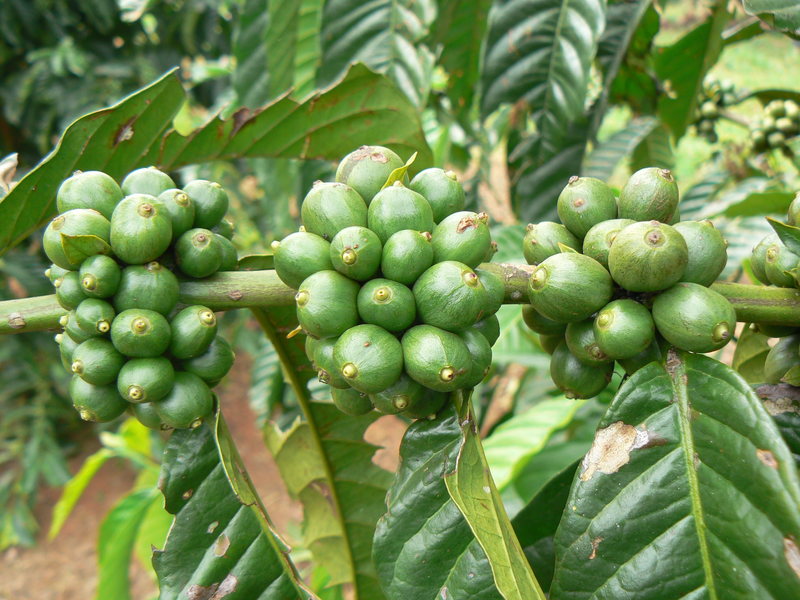 Despite the pest’s ubiquity, its origins remain mysterious. Anecdotal evidence suggests that the coffee berry borer originated in Central Africa. This is important information, says Vega, because if researchers know the climatic conditions of the insect’s origins, they can identify its natural enemies, hopefully harnessing these predators to destroy the bug, rather than relying on chemical pesticides. But scientists lack definitive proof of the borer’s origins, and short of taking a worldwide coffee tour or going back in time, researchers have been stumped as to how, precisely, to map its path around the world.

The blacklegged bloodsuckers go on three “quests” in their life, each time seeking a blood meal.
READ MORE 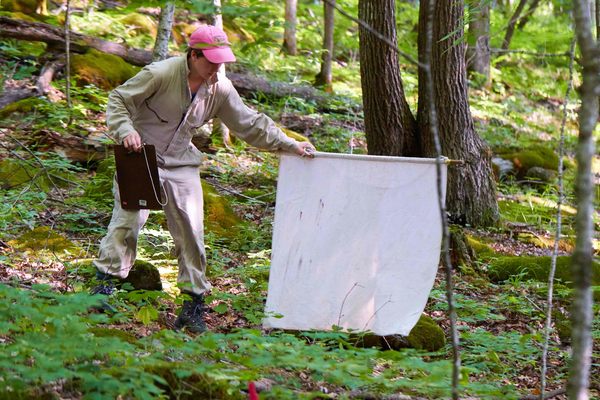 That changed, though, when Vega approached colleagues at the United Kingdom’s Royal Botanical Gardens, Kew in 2013.

Vega’s goal was to search through Kew’s vast collection for signs of berry borer infestation. Davis, who has been working with Kew’s collections for more than a decade, was skeptical. The collection houses 7.5 million plant specimens, some dating back more than two centuries, which are mounted onto paper, dried, and stored in cabinets in the massive, library-like herbarium. “I’d never ever seen one of these beetles or evidence of beetle attacks on the specimens,” Davis says.

But within a few minutes, a Kew researcher spotted a beetle. That set the team off on a multi-year hunt through Kew’s and other herbaria’s collections. They inspected 18,667 African and Asian botanical specimens, including coffee and other plants that thrive in similar environments, dating from 1900 to the present. 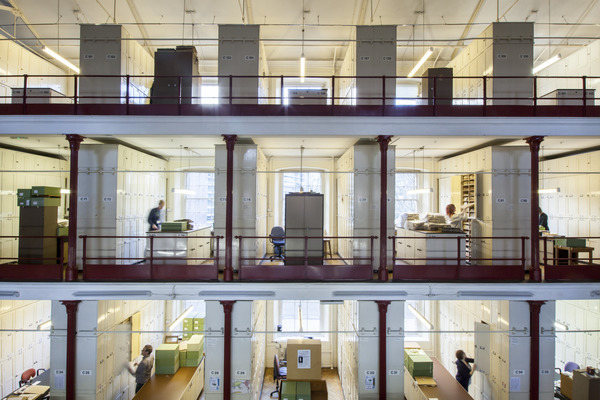 Kew’s herbarium contains millions of plant specimens from across the world, some of them dating back centuries. COURTESY OF STEVE LANCEFIELD, RBG KEW

Using standing electron microscopy to detect hidden beetles, researchers eventually identified 72 occurrencesof infestation. All of the infestations were on African coffee species, confirming researchers’ hunches that the berry borer was native to the hot, wet climate of the Guineo-Congolian forest, and that it’s uniquely adapted to living on coffee rather than other plants. By mapping their results, researchers determined it was likely that the coffee berry borer, originally a bark-eater, adapted to digest caffeine and feed on coffee trees in Central Africa, then spread to coffee plantations worldwide by the early 1900s.

But the researchers’ findings don’t just tell us about the biology of the coffee borer beetle. By tracing the insect’s likely origins and its eventual journey around the world, their findings provide insight into coffee’s path from a wild Central African plant, to a colonial commodity, and finally to the ubiquitous global beverage it is today.

“Coffee spreads with colonialism,” says Casey Lurtz, an Assistant Professor at John Hopkins University who researches the history of coffee in Latin America. Native to Central Africa, it was first consumed by Ethiopians and South Sudanese people, who mixed it with animal fat to create a kind of early protein bar. By the 1300s, the plant had spread to the Middle East, which is where the beverage we know today likely originated. Muslim traders spread coffee through Asia, as far as Indonesia, and the Ottomans popularized public coffee houses. By the French Revolution, social coffee drinking had caught on among Europe’s intellectual elite. At that time, Europeans considered coffee a precious ■■■■■■ costly and luxurious, similar to saffron, cinnamon, or—at least until the 19th century—sugar. 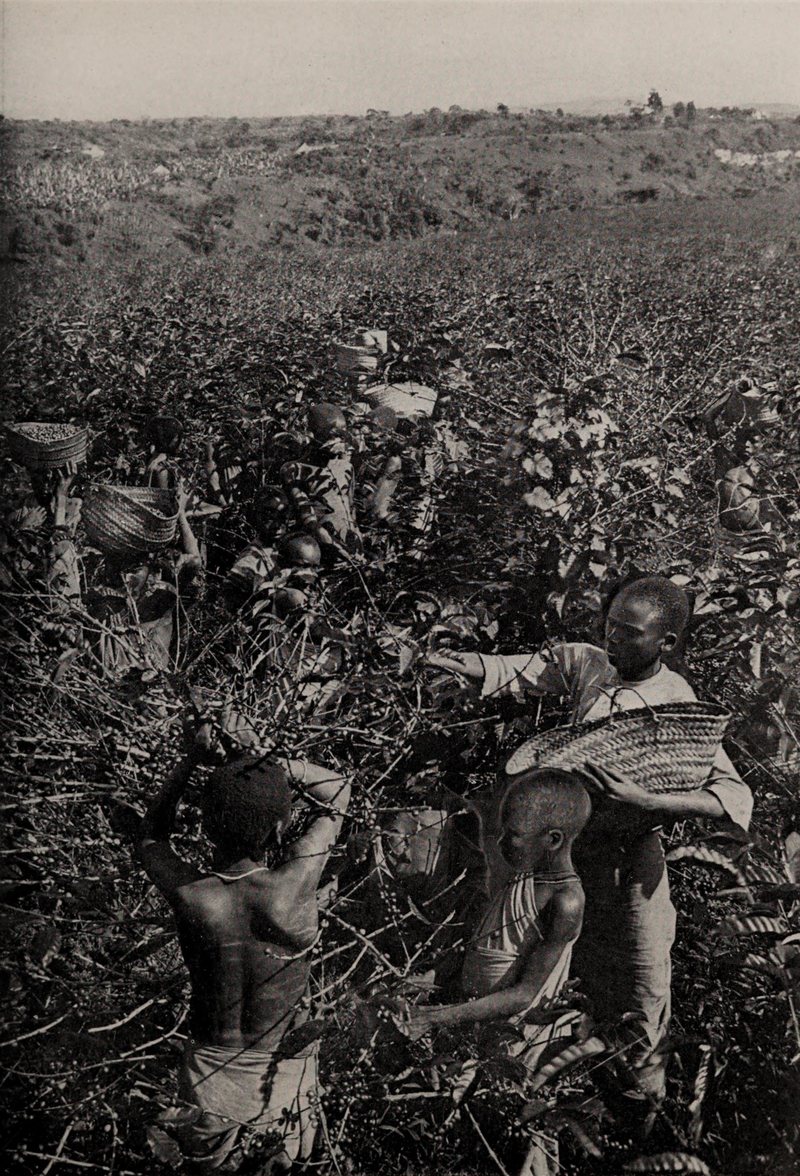 Workers harvest coffee in the early 1900s in British Nyasaland, present-day Malawi. Coffee cultivation spread with European colonialism, and was largely powered by enslaved laborers. THE ENCYCLOPEDIA OF FOOD/PUBLIC DOMAIN

Empire changed everything. Previously, Europeans had relied on traders from Islamic areas to obtain coffee from Africa and Southeast Asia. But the advent of the colonial era—driven by an insatiable hunger for economic control, powered by enslaved human beings, and enabled by a combination of guns, political maneuvering, and disease—gave them direct control over Asian and African production. Europeans spread the crop to Latin America, where it was cultivated in plantations worked by enslaved people.

As coffee spread, so did the field of natural history. European powers embarked on programs of intensive scientific research, cataloguing the flora and fauna of the imperial holdings in order to extract as much value as possible. Around that time, they established the very natural history from which the berry borer researchers sourced the samples for their study. “Like it or not, Kew was involved in discovering plants and assessing their economic and commercial value,” says Davis.

By the late 1800s, Brazil had become the world’s coffee capital, and Brazilian scientists had become the foremost experts on coffee production. Ironically, says Vega, it may have been this very research that brought the berry borer to Brazil. In the early 1900s, the first berry borer outbreak hit the country. Though we can’t be sure of the means of contamination, Vega says a batch of infected seeds or berries, possibly imported from Africa for crop breeding experimentation, is likely the source. “There can be 280 eggs in one berry,” says Vega. “You only need one.” 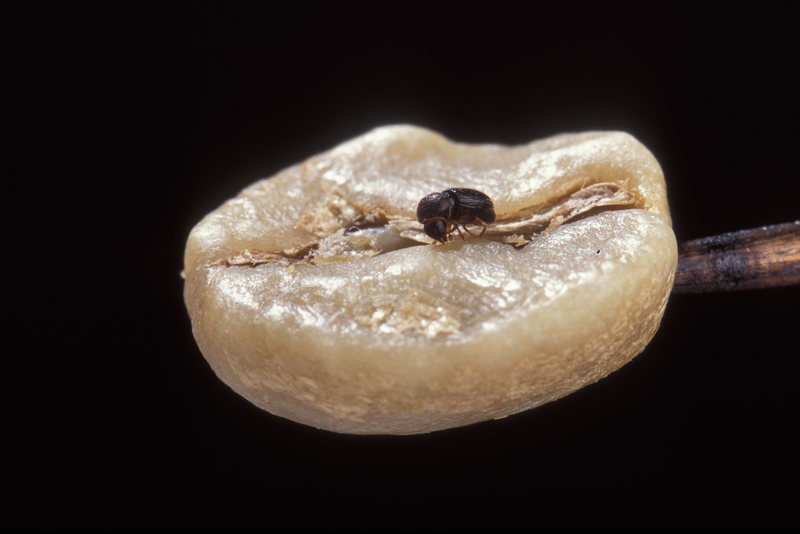 Scientists have been working to eliminate the pest ever since. So far, attempts to harness predator organisms to kill the beetle, a common agricultural tactic, haven’t panned out. A Mexican roundworm reduces the beetles’ fertility, but doesn’t kill them. Some types of wasp from Mexico and Africa can locate and kill the beetle when it crawls out from the coffee berry, but the wasps haven’t survived attempts to introduce them to coffee plantations worldwide.

Meanwhile, the insect’s sheltered life cycle makes it particularly difficult to target with pesticides. What’s more, says Vega, the industry has neglected small-scale, independent coffee farmers, many of whom lack the resources to implement expensive pesticide regimes, and risk their own health with chemical treatments. It is these farmers’ livelihoods, rather than the profits of big coffee chains or the quality of a morning latte, that motivate Vega. “The grower is the one I’m concerned about,” he says.

By shedding light on the bug’s origins, the herbaria study should help researchers identify more of the borer’s natural predators, in the hopes of eventually finding one that can be adapted in plantations around the world. The colonial-era collections in Britain’s herbaria, like the coffee industry itself, are interwoven with the violent legacy of European empire. But these same collections may just hold the key to liberating small-scale coffee farmers from a different kind of invasive species. 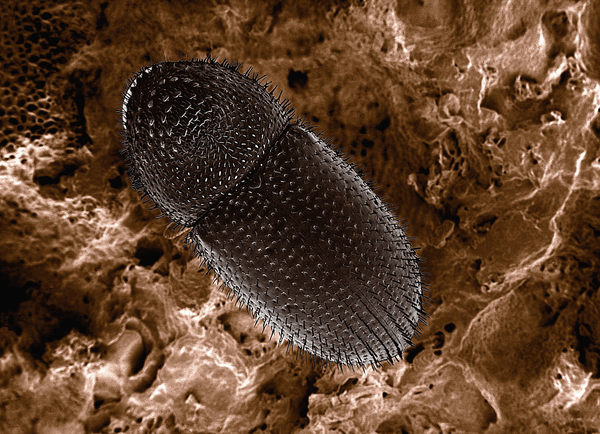 Solved: The Mysterious Origins of Your Coffee's Worst Nightmare

Researchers inspected 18,667 plant specimens to track down a caffeine-eating beetle.