For a while now, it has looked like we were on to a winner in November. The Left overplayed its hand: weakening the police, resulting in a surge of murders and, of more importance to urban and suburban liberals, mass looting of stores where they (liberals) like to shop. Relaxing controls at the border, resulting in a surge of illegal immigrants And then there is the push to sexualize children, starting with first-graders.

But then … don’t underestimate the cunning of our enemies, and their willingness to spend big money to destroy us. They have decided to carry out their work within the patriot movement, and make us shoot ourselves in the foot. ‘Open Primaries’,where people can change registrations and pretend to be Republicans, are the key to doing this, plus large campaign contributions from our wealthy enemies to … Republican primary candidates!

This essay from Rachel Alexander at Intellectual Conservative spells it out:

Do some of these MAGA candidates seem too good to be true? That’s because they are. They violate the rule crafted by the late William F. Buckley Jr. known as the “Buckley rule.” It says to support the candidate the furthest to the right who is electable. This is why a lot of conservatives suck it up and stick with the GOP instead of defecting to an obscure third party where no one gets elected.

But the left, always one step ahead outsmarting us, has figured out how to make unelectable fringe candidates look so appealing that people forget the rule. They are pouring money — $44 million this year — into our primary races to help candidates who probably aren’t electable in the general, and are re-registering to vote in our primaries. The Washington Examiner declared in July, “Democrats have been awfully active in the 2022 Republican primaries.”

While pollsters were once confidently predicting a GOP sweep this fall, possibly taking back the U.S. Senate, this is no longer so. Democrats have figured out that they can help fringe candidates falsely label solid conservatives as RINOs. They’ve been assisted in a few races by Donald Trump, who thought he was doing the right thing in some of these races endorsing candidates, but was fed bad info by people he trusted.

In Illinois, Democrats spent millions attacking a black Republican mayor running for governor, Richard Irvin, in order to boost State Sen. Darren Bailey. Irvin’s campaign said Democrats spent over $31 million in attack ads, with at least $13 million from the Democratic Governors Association and $6 million directly from Democratic Gov. J.B. Pritzker. Once Bailey got Trump’s endorsement, it was all over and he defeated Irvin. One of the few polls in that race shows Bailey losing to Pritzker by nine points.

In Maryland, the Democratic Governors Association spent money to help Dan Cox defeat former Secretary of Commerce Kelly Schulz. Schulz worked in the administration of Gov. Larry Hogan, who surprisingly got elected in the Democratic state, so she was expected to have a good shot at keeping the GOP legacy going. Instead, Cox got Trump’s endorsement and won, and is widely expected to lose to the Democrats’ charismatic Wes Moore, who will become the state’s first black governor if elected. Hogan lamented, "Trump is trying to insert himself in races all across the country where people he’s supporting are crazy.”

In Pennsylvania, State Attorney General Josh Shapiro, who is running for governor, spent $840,000 to boost his GOP challenger State Sen. Doug Mastriano over former U.S. Rep. Lou Barletta. Trump endorsed Mastriano and he easily won. A Fox News poll from a little over a week ago shows Mastriano ten points behind Shapiro.

Democrats were unsuccessful in Colorado, however, spending millions to bolster fringy candidates that went nowhere as all three lost their primary races. And some of their spending did attack truly awful Republican candidates, such as Rep. Peter Meijer of Michigan and Rep. David Valadao of California, two of ten Republicans who voted to impeach Trump. Valadao won despite their efforts, but Meijer lost to former Trump official John Gibbs.

Democrats merely needed to change voter registration in Arizona to ensure one fringe candidate won. Conservatives there are so wary after years of the late Sen. John McCain that they are quick to jump on the bandwagon calling anyone a RINO. For example, Rep. David Schweikert, who has an outstanding lifetime rating of 96 from the American Conservative Union, is frequently called a RINO despite the fact he’s been able to maintain that voting record in what is now the most competitive district in the state.

Funded by four out-of-state billionaires, trainwreck U.S. Senate candidate Blake Masters bashed his original main opponent, Arizona Attorney General Mark Brnovich as a RINO and used his boss Peter Thiel to get Trump’s endorsement. After he won, betting markets flipped and started predicting Republicans would not win back the Senate this fall. Incumbent Democrat Sen. Mark Kelly has raised over $50 million and appears poised to raise $100 million just like he did in 2020.

Kelly defeated Sen. Martha McSally, a weak candidate who had been appointed to the Senate seat over the objections of conservatives by Gov. Doug Ducey, by over two points in 2020. At this point in the election cycle two years ago, polls had McSally behind by as little as two points. In contrast, polls currently show Masters performing far worse, losing in double digits, with a poll commissioned by his own supporters showing him down five points.

According to CNN, Trump almost stopped endorsing candidates in the primary in May due to how problematic it was, holding off on endorsing Masters until June. Republicans broke records voting in the Arizona primary, due to all the crossover Democrat votes. In fact, in 2022 so many Democrats re-registered as independents in order to vote in the GOP primary that the numbers of independents not only outnumbered Democrats but even outnumbered Republicans in Maricopa County, and while Republicans and independents increased their percentages statewide, Democrats decreased theirs.

Other candidates that were able to finagle a Trump endorsement but who might lose the general election include Senate candidate J.D. Vance in Ohio and Senate candidate Dr. Mehmet Oz in Pennsylvania. Vance, who got Trump’s endorsement in part due to Thiel just like Masters, is trailing Rep. Tim Ryan by nine points in the latest poll. Mehmet is trailing Mayor John Fetterman by 14 points.

These candidates could cause other solid Republican candidates to lose. Independent swing voters who might not necessarily vote will have a visceral reaction to some of the worst GOP candidates, getting them out to vote anti-Republican all down the ballot.

It’s time to stop rushing to support and endorse anyone who calls themselves MAGA or America First just because they have money, an insider connection and labels their opponent a RINO. Don’t be fooled, we’re getting played.

The reason that the Dems might squeak through in November would be that the GOP is a hollow political party, and just not being a Democrat is a lousy identity. Maybe now it will work, because of the Dem’s breathtaking incompetence, but that’s it. They are still controlled by the conventional politicians and the consultants and moneymen who don’t have much of a purpose other than to keep the gravy train going.

If the GOP gets control of congress, big deal. They’d make noise, hold hearings, and do little but stand in the way of Biden’s crazy agenda. Yes, that’s enough for me to vote GOP, but I have very, very little confidence that a bunch of politicians who are led by McConnell and McCarthy will fight anything substantial. They’ll offer token resistance.

And I take all of these strategists with a huge discounting factor. They don’t seem to be very good at it, are resistant to any change in the Karl Rove gameplan: get polished phonies, tell the people enough lies to get 51% of the vote. That’s what they mean by “electable.” That’s their whole world, and it’s why Trump was such an abomination to them - he demolished most of that paradigm by just using a little common sense.

Now it’s back to business as usual, long live the Paradigm! Whether Kari Lake will run a good campaign, I have no idea, but if she annoys the Karl Roves of the world, that’s a plus in my book. A much stronger plus than an endorsement, by Trump or anyone else. Trump may have some endorsing clout, but I have big doubts that he’s astute enough about these things to know whether Lake or Oz or whoever is going to do the right thing if elected. The odds are very bad that more than a few of these newcomers have principles and will stand firm on them.

Ah … so if CNN says a hurricane is on the way, I shouldn’t worry? Everything they say is false?

Well, of course you are right. The GOP is basically the Chamber of Commerce Party. That’s why they pushed free trade and were indifferent to mass illegal (cheap labor) immigration, and don’t really care what the public schools do to our children.

But Trump showed that the Republican base is totally different!

So our job is to get these people, including ourselves, into the Republican Party, and nominate, where we can, candidates who are true patriots, and who can win. This may sometimes mean nominating and supporting a less-than-perfect candidate … that’s just the way politics, and war by the way, works.

We need principled candidates who realize we are at war, internally. Michael Anton’s book The Stakes: America at the Point of No Return
[ Amazon.com ] should be required reading for every Republican. If I had a few million dollars I’d buy a copy for every elected Republican. You can get a used copy from Amazon for $4!!!

Of course, professional politician-opportunists will adapt their colors to appease the patriots – as they have done already. This is just the way life is. We have to keep their feet to the fire, drafting and introducing our own bills, monitoring them closely, letting them know via letters and emails and phone calls when they seem to be deviating from the hard fight we need.

Look … the alternative is just to sit back and watch the flat screen and post on obscure forums while the Left gnaws away at the foundations of the country.

Ah … so if CNN says a hurricane is on the way, I shouldn’t worry? Everything they say is false? 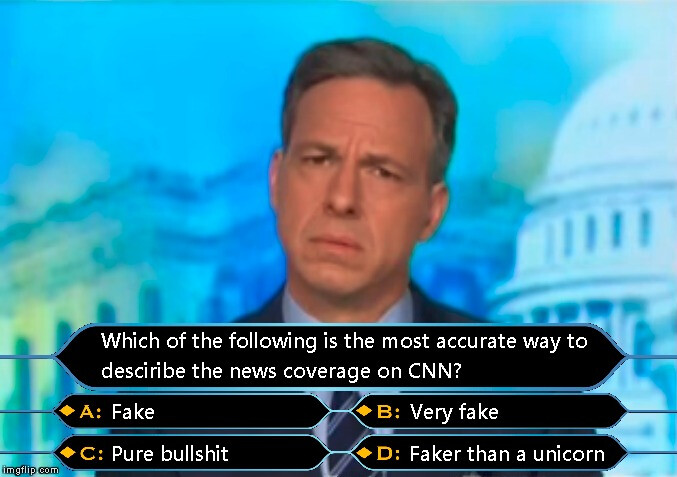 This makes my minimal efforts wothwhile