Government Spent Nearly $8 Trillion in FY 2018—and Most of It Was Unproductive How much of all that government spending actually added to US economy’s gross domestic product?

Meanwhile, state and local governments throughout the country spent a total of $3.74 trillion dollars, which, when combined with federal spending, gives us a total of $7.85 trillion spent by governments at all levels in the United States during 2018.

That’s certainly quite a lot of money, but did you ever wonder how much of that money was spent productively?

One way to find out the answer to that question is to see how much of all that government spending by the federal government and by state and local governments adds to the US economy’s gross domestic product. The chart below shows the answer as provided by the Bureau of Economic Analysis’ latest estimate of GDP for the third quarter of 2018, which ended at the same time as the US government’s 2018 fiscal year. 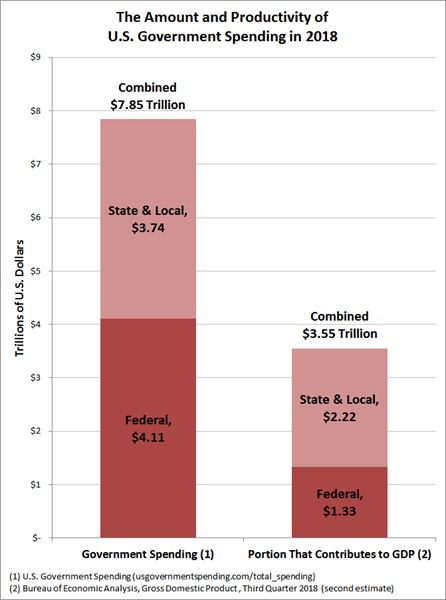 No surprise there. Welfare spendings dont do much to contribute to GDP.

More than half of government spending is on 2 entitlements, SS/retirements and Healthcare.

And no one has the courage to even talk about it, let alone offer some solution. Congress is just kicking the can down the road.

But one day soon when investors give the treasury the middle finger and demand a risk premium in interest, congress will learn all about cutting spending.

More than half of government spending is on 2 entitlements, SS/retirements and Healthcare.

Interesting they claim to be “spending” on social security.

When congress appropriates money for any program, it’s called spending.

SS is no different, without an appropriations bill to allow the spending of dollars, people would receive no SS check.

The SCOTUS made it quite clear that SS is an entitlement and can be changed by congress at any point in time and because you pay a SS tax does not entitle you to SS benefits.

One has to wonder what they are thinking with 22 trillion in debt and accelerating.

One could even think they are deliberately trying to bankrupt this country.