Good Morning from New Iran! We are far-removed from the constitutional republic we were promised

So, President Trump was banned from Twitter. He was also significantly censored by Facebook, Google, and Apple, and likely will remain muzzled by Big Tech through the end of his presidency, if not longer.

We knew this was coming, though perhaps we thought the social media giants would wait at least until he left office. We know it’s going to get worse after January 20, when Joe Biden assumes the Oval Office. The un-personing of Donald Trump is going to be one for the history books, until the history books, too, are inevitably jettisoned.

Still, our prominent conservative “thought leaders” are unprepared for this reality.

“But the president of Iran gets to keep his Twitter account, and that’s not fair,” seems to be their thematic response.

Yes. That’s exactly right. Donald Trump does not get to have a Twitter account, but the president of Iran, and any other authoritarian hellhole dictator you can list, does. But it is time to stop scribing about the hypocrisy of the technocrats and the media and the radical Left, yelling, “See, look how hypocritical they are!” They are perfectly comfortable with their own hypocrisy. They only care about power.

It is also time to face a harsh reality: today’s American regime has far more in common with the Iranian regime than we’d like to think, and Americans are more like subjects of totalitarian tyrants than citizens who have consented to being governed.

You have lived in Iran for a long time now, but nobody has been willing to tell you that. So, good morning! It’s another beautiful day here!

Naturally, we have a state religion. It’s called “wokeness,” the core tenets of which are Drag Queen Story Hour, looting businesses in the name of “racial equity,” and, most importantly, believing everything you are told by the government and the media, without question.

Every action by every institution, including our government, derives from this state religion. Every major institution is driven by ruthless, illiberal conformity masquerading as moral righteousness, which is now synonymous with “wokeness.”

We have elections here. Officially, we are a republic, where the rule of law is paramount. But don’t worry too much about the election process or the results. Neither are your concerns. Donald Trump was the antithesis of the state religion of “wokeness,” and that is all you need to know.

In Iran, our government is a dictatorship-by-committee.

Ayatollah Jack Dorsey and his friends at Facebook, Google, and Apple are chiefly responsible for maintaining the sanctity of the state religion in the public square. In order to ensure that you can only absorb the ideas of the state religion, our nation’s capital, Silicon Valley, has teamed up with the media establishment to promote such “reliable sources” as CNN’s Brian Stelter, and his show “Reliable Sources.” On that show and others like it, they parrot the pre-approved talking points of your overlords. Big Tech’s alignment with the media was a no-brainer. That media consists of reporters who have pledged their undying commitment to the new state religion.

Shortly after the 2016 election, Google promised to do everything in its power to make sure Donald Trump wasn’t reelected. And it did, stripping some conservative news and commentary sites of ad revenue.

Get woke or go broke.

Facebook intentionally throttled conservative news websites algorithmically at the direction of Ayatollah Mark Zuckerberg. Along the way, those who failed sufficiently to adopt the new state religion were purged by every social media outlet.

Due to the “context” of Donald Trump’s tweets and “how they are being received on and off Twitter,” the social media site banned the leader of the formerly free world. Twitter’s officialblog post explaining Donald Trump’s ban prominently features the company’s iconic bird logo. But the logo is altered, and the bird is wearing a mask—a not-so-subtle message from your new corporate masters that you will obey them and follow their COVID-19 guidelines. According to our state religion and The Science™ (though most certainly not actual science), wearing a mask is right and just.

The publishing industry is not immune to Iranian-style censorship either, in case you were hoping to write a manifesto about your dwindling liberties. In the name of “democracy” and “freedom,” Simon & Schuster last week canceled the publication of Senator Josh Hawley’s (R-Mo.) forthcoming book on Big Tech tyranny. (The publisher really said that, by the way). Amazon has been banning the sale of “controversial” books for years.

And in case you still haven’t accepted the new state religion, not to worry! Your overlords, including Chris Hayes of MSNBC, are planning Truth and Reconciliation Commissions for you. You will learn the core tenets of “wokeness,” and you will accept it as your religion, too.

Just remember, they’re doing all of this for your own good. After all, Our Democracy™ (code used by the woke apostles to describe the theocratic dictatorship in which we now live) would be unsafe if you were subjected to robust debate and differing opinions.

And let us not forget the grand poobahs of the state religion. Remember that stunt you pulled last week at the sacred Capitol building, inside which the high priests and priestesses of the state religion make the rules? That was totally unacceptable. They understand that you are very upset, or maybe they don’t. It doesn’t matter. They don’t care. All they know is that you will obey them, or you will suffer the consequences, which is why the “wokeness” enforcement arm of the state religion, the FBI, is working overtime to identify and jail everyone involved.

We are far removed from the constitutional republic we were promised, and we’re trending in the wrong direction. But do not fret. Ayatollah Biden will soon be installed to “Build Back Better,” and you can trust that here in New Iran, your overlords will always act with your best interests at heart. 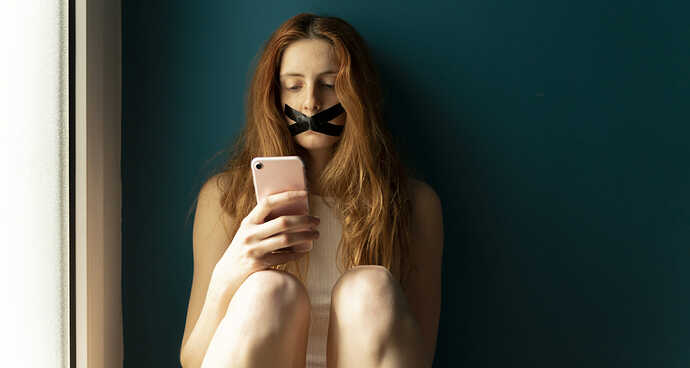 So, President Trump was banned from Twitter. He was also significantly censored by Facebook, Google, and Apple, and likely will remain muzzled by Big Tech through the end of his presidency…