The Biden stimulus is crammed with goodies but makes no economic sense.

If President-elect Joe Biden’s economic-stimulus plan is a preview of what to look for over the next four years, we can expect lots of feel-good populist measures that will ultimately harm the most vulnerable people in the American economy.

The plan offers some things to like, or at least not object to—more money for vaccines and testing, opening of schools, expanding the Earned Income Tax Credit (a subsidy for low earners), child tax credits, more money for small businesses, and expanded unemployment benefits. Those last two will be especially necessary, even after the pandemic passes, because other provisions in the proposed stimulus will harm small businesses and throw millions of people out of work.

The plan includes a national $15 minimum wage and elimination of the “tipped minimum” for service employees. In places like Mississippi, $15 is already the median hourly wage, and the current minimum is $7.25. Biden’s plan thus doubles labor costs for many businesses barely staying afloat. New York City already has a $15 minimum wage, but its tipped minimum wage remains $10. Small businesses, especially in service industries, are already struggling, and many will be facing debts for years to come. Raising their costs now and discouraging hiring will not grow the economy.

Moreover, it’s not clear that wages have anything to do with the pandemic. Unemployment from forced business closures—not inadequate pay—is hurting workers. Evidence suggests that large minimum-wage increases reduce employment for the most vulnerable workers. And those studies were conducted during boom times when businesses were doing well.

Another concerning proposal is an extra $1,400 check sent to each person in most American households. This would be in addition to the $600 from December, fulfilling President Trump’s promise of $2,000 checks. Even left-leaning economists like Larry Summers and Jason Furman think that aid should be more targeted. Biden argues that we owe it to low earners because they had a hard year—but that’s not an economic argument. It’s not even classical Keynesian economics, which would call for spending when demand is soft, not while supply is constrained. The problem with the economy is a supply shock, similar to a natural disaster, where people can’t spend—restaurants and movie theaters are closed, for example, and no one is going on vacation. Sending everyone a check could help if the problem was a demand shock—where people don’t want to spend—or for people suffering from lack of money. But the evidence that checks will boost demand is mixed.

Furman notes that saving rates are up. Lots of aid and nowhere to spend it means household balance sheets are stronger than they’ve been in years. He anticipates lots of pent-up demand as the economy recovers. Combined with the Fed’s commitment to low interest rates, we may even see some inflation—in essence, a tax that hits low earners hardest.

Biden says that the bigger danger is spending too little rather than too much. No danger of that in his plan, which clocks in at $1.9 trillion. Combined with December’s aid package, that adds up to $2.8 trillion. It’s possible to justify such spending when you’re facing a once-in-a-lifetime crisis. But aid works only when targeted to struggling businesses, landlords, and unemployed Americans. How we spend is as important as how much we spend.

Many of the Biden plan’s provisions won’t pass, but what’s worrying is the direction we are heading. Rather than using evidence and reason to shape policy, policymakers are stuffing their proposed budgets with big-number giveaways—$2,000 checks, $15 minimum wages—while giving little thought to who will pay for it and what the consequences of adding all this debt will be. We’ve gotten used to populist appeals with which most economists disagree; it looks like the next four years will offer more of the same. 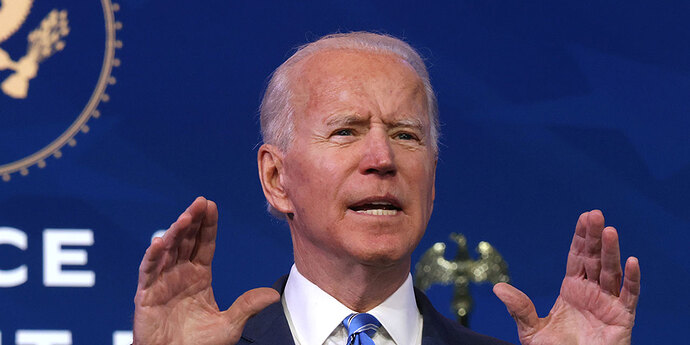 The Biden stimulus is crammed with goodies but makes no economic sense.