Even the London Police are Getting Culturally Enriched with Blades

London is a beautiful intersectional diverse area full of people with diverse wants and needs. Like the need to plunge blades into white people regardless of their job.

I guess we shouldn’t feel too bad. These are the same police who standby why children are raped by Pakistani grooming gangs.

Why are the Brits today so…lacking? Their badass ancestry is top notch, so what the fuck? Did all the ones with any balls immigrate to America or something?

How could this have happened? The UK already banned knives. We all know that banning weapons is 100% effective in all cases. The UK must now move quickly to ban hands. You can’t stab someone if you don’t have hands. It’s sensible control to get these weapons of war off the streets.

Like the need to plunge blades into white people regardless of their job.

Might be time for police in the UK to think about carrying guns. Obviously, violent criminals aren’t scared of people who are unarmed. It’s a hell of a concept.

I don’t know, allowing police to defend themselves is a pretty tall order.

I’m actually surprised the cop used a taser. Once he recovers from his wounds Sadiq Khan will probably charge the infidel cop with a hate crime and with the attempted murder of a member of the Religion of Peace.

In the UK London police are know as the metropolitan police and they are the most corrupt scoundrel I have interactive with and I don’t even have a criminal record. The amount of times I have been going about my day-to-day business and they pull me up and say thier has been a crime nearby and I look like the suspect they won’t give me their badge numbers and they accuse me of swearing at them with a grin on their face knowing full well I haven’t done anything like that they used to bother me 2 to 3 times a week for no reason and threaten to get me arrested for doing stuff they know i haven’t done which was normally abusing a police officer it’s really hard as one individual or maybe with some friends to prove your innocence in that situation there are scumbags I wouldn’t have got the guys radio

Funny how the title of the video was London “Stab city” was removed for hate speech! 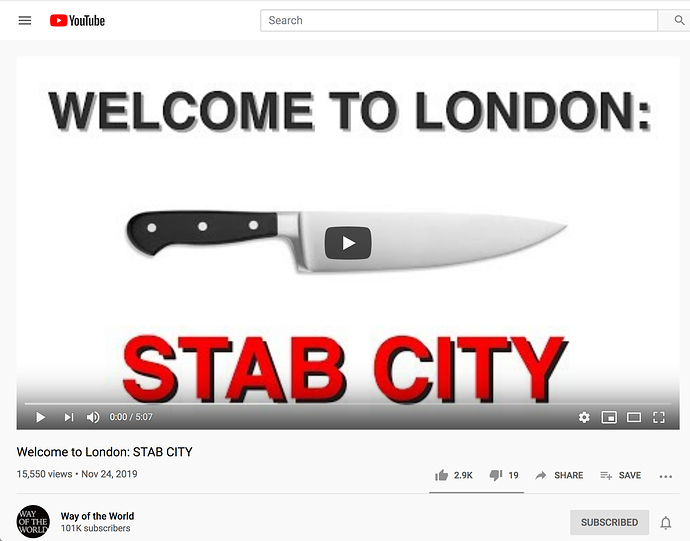 I believe it has to do with their colonial period.

Becoming enmeshed in wars and occupations in India, Africa, the Middle East and Asia over the past two (+?) centuries and mingling with the native populations gave those native populations the right to petition the British government to allow their individuals with a sterling war record fighting alongside the British, to settle in the UK.

This was resisted to a greater degree earlier than later, when the fair minded and uninformed British spoke up for fairness to reward the noble Muslims and other natives from all over their colonies for their friendship and loyalty.

And eventually their argument won the day.

And at first there was little problem with the influx of foreigners as they DID mostly prove to be loyal friends. But they also brought with them a set of “luggage” which would become more apparent with each successive generation until in 1968 there were so many instances of discrimination against people of color, that a law was passed preventing racial discrimination.

In April 1968 a member of Parliament (MP) who was thought to be a leading contender to become the next Prime Minister of Great Britain, Enoch Powell delivered an historic and incendiary address known as The River of Blood speech.

This brief video marks the 50th Anniversary of it.

Powell was called the worst kinds of names for saying the new law would give the Black man the whip hand over the White man.

(All of this is subject to factual edit, but is generally close to being spot on, iinm) If Hillary and Bill had had a daughter I imagine she might look like that GIF girl.

I totally agree. The only way to quell continually escalating violent attacks against police (and people in general) is with stronger and more effective violence against the perpetrators…in a rapid response to the initial attack. Just kill the bastards at the scene.

Then publicize the perpetrator’s death with front page news and photos of the beheaded body.

Attempting to be politically correct when dealing with maniacal violent criminals is lunacy. Kill them and be done with it.

Machiavelli would be proud…and I would be quite pleased.