Cringe: How The Sims Has Spearheaded Queer Representation in Gaming 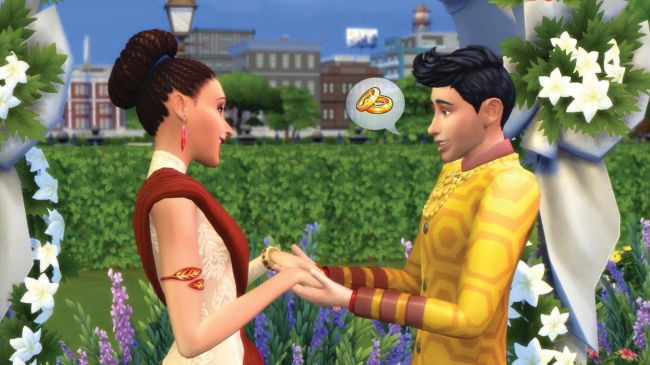 When I first played The Sims as a little girl, I found it odd that I could have relationships with men and women. It would be many years before I realised that this isn’t just normal—it’s also my normal.

Now that I’m older and have come into my own as a bisexual woman, I’ve realised the profound impact The Sims had on me through its depiction of queerness as natural in the face of a society that once largely found it radical. For the last two decades, The Sims has spearheaded queer representation in gaming. The freedom it’s long offered in letting players romance, woohoo, and marry whomever they wish regardless of gender—to be who they truly want to be without limitations—has been so valuable to my exploration of my identity, as it has been for many others.

There’s little mystique found in The Sims—things can and often do get silly, but its core is grounded in reality. You create and control characters who get jobs, form relationships and raise families.

It’s this mundanity that helped a player named Mark find themselves. They initially dismissed their preference of controlling female Sims as doing what they couldn’t do in real life—in this case, be a girl—because it was a videogame. “By the time I was mature enough to even attempt to try to figure out my identity, I had realised that playing as feminine and especially androgynous characters was more appealing,” says Mark. They grew to see it more “as an aspirational goal than … a novelty” which proved easy “in a game about just … living, without having to lead a gang or battle aliens”.

The realism was also crucial for a player named Lily in coming to terms with being trans. She says the character creator is one of the few “where the clothing options are both realistic—not fantasy armour or military gear—and varied”. This has allowed her to spend hours trying clothes on her Sim, expressing herself in ways she hasn’t been able to in real life.

Using The Sims as a playground for experimenting has been integral to games journalist Rebekah Valentine’s healing process following a break-up. Before it happened (though unrelated to it), she began thinking she might be bisexual. While she’s still coming to terms with her bisexuality and doesn’t want to date yet, she says it’s been immensely helpful to live through her Sim “to explore what my … ‘ideal’ life would be like if I didn’t have fears and anxieties and worries about everything from money to sexuality to whatever else”.

For Mollie Faux-Wilkins, otherwise known as TheEnglishSimmer on YouTube, seeing herself in her Sims let her feel like her queerness was just an ordinary part of her rather than a big discovery. “Before I even suspected that I might not be straight and throughout my childhood, I had a positive space on my computer where my Sims could have feelings for any gender, and that normalisation felt like it played a major role in my coming out.”

She’s made a point of creating queer content, which matters given her visibility as one of the largest figures in the community. She’s driven by “the viewers who [have] needed to find it and … desperately wanted to see themselves or their friends in the media, be it a videogame, TV or books”.

While The Sims has been wonderfully inclusive with its options—you can pick a Sim’s physical frame, clothing preference, whether they can become pregnant, and whether they can use the toilet standing—there’s always room for improvement. Faux-Wilkins and her community have already discussed how the series can keep leading the charge on queer representation.

One way is the implementation of a third non-binary option to the Create-A-Sim tool and they/them pronouns in the game’s notification system. Faux-Wilkins adds, “Opening up that conversation made me realise that not all languages in the world have gender neutral pronouns … That’s why I think starting these conversations are so important.”

Electronic Arts has recently revealed a new partnership with the It Gets Better Project to include LGBTQ+ Pride items in The Sims 4. And, with the help of more queer-affirming media like The Sims, it truly does get better.

How The Sims has spearheaded queer representation in gaming

Sim relationships give players space to explore their own identity.

The only people who play the Sims nowadays are women and queers, the only people I know who play it are my sister, sister-in-law and the trannies on /v/

After reading that total shit article I feel like sitting in my car with the engine on and the garage door closed.