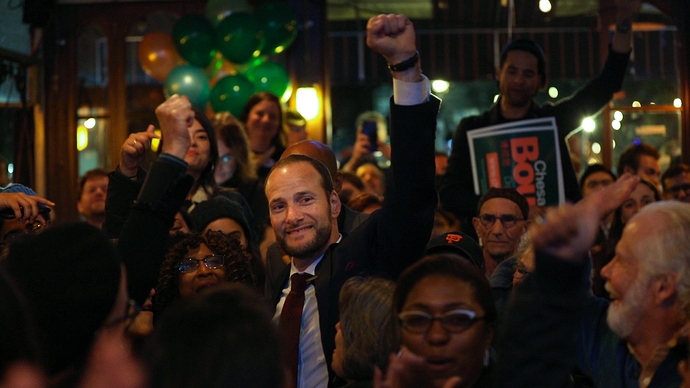 On Saturday, San Francisco voters elected the son of two former Weather Underground murderers to serve as their District Attorney. The voters deserve all the hell that is about to break loose.

Progressive candidate Chesa Boudin wants to free criminals but prosecute police and ICE agents for doing their jobs. It’s no surprise Boudin hates cops so much. His parents did, too. Kathy Boudin and David Gilbert were terrorists in the Weather Underground who murdered two police officers and a security guard during a 1981 robbery of a Brinks armored security car outside New York City.

There should be a law that children of terrorists who share their parents’ worldview are barred from holding public office, especially the role of the chief law enforcement officer. Boudin’s dad is still in prison so he can’t kill any more cops, but his mother is out. Naturally, she is an assistant professor at Columbia University.

After his parents killed the cops, Boudin was sent to live with two other terrorists, Bill Ayers and Bernardine Dohrn. Dohrn declared war on the United States and was on the FBI’s Most Wanted list. Ayers bombed the Pentagon, the U.S. Capitol building, and the New York City Police Department before he and Dohrn became fugitives and went into hiding. The pair eventually came out of hiding and settled in as university professors.

As district attorney, Boudin plans to decriminalize crime and close down jails. He believes the criminal justice system is racist, and he plans to cut back on the time criminals serve under parole supervision, which he thinks is also racist. Boudin also wants to stop prosecuting gang members to the full extent of the law because he thinks that’s racist, too. He thinks everything is racist.

Boudin plans to hand out U-Visas to immigrants like candy. U-Visas were originally meant for immigrants who could aid in the prosecution of crimes, but now they are rampantly misused and Boudin vows to misuse them even more. Boudin thinks every illegal alien is the victim of a crime committed by ICE and President Trump, so every immigrant will get a Visa. Boudin also wants to advocate on behalf of anyone in the United States facing deportation, including aliens who murdered cops like his parents did.

Boudin was endorsed by socialist Bernie Sanders, which somehow makes him seem less radical. But he isn’t.

Just when you think it isn’t possible, San Francisco gets a whole lot crazier.

On Saturday, San Francisco voters elected the son of two former Weather Underground murderers to serve as their District Attorney.

Not surprising. Obama was best pals with terrorist Bill Ayers.

Good. Fuck San Fagsicko. Let that degenerate city choke to death on its own retarded ideologies.

Boudin thinks every illegal alien is the victim of a crime committed by ICE and President Trump, so every immigrant will get a Visa.

I didn’t realize that local district attorneys could issue visas on their own like this. If they do then they should be required to comply with all federal immigration laws including not making their cities a sanctuary city.

How much more BRAINDEAD can voters become???

Now we get to watch San Francisco plummet into lawlessness. This nut doesn’t want to enforce any laws and won’t send people to jail if they are parents or have an elder care hardship. Let’s just hope that the businesses that are in SF get fed up with having their corporate HQ in a lawless shit covered city that no one wants to visit.

Here in Las Vegas they just made ‘camping’ on city streets illegal to get the homeless off the streets and into shelters.

With any luck, the hardcore detritus will be shipped or drawn to SF, where they will be welcomed as conquering heroes by the sort of mooching turds that voted for that DA .

They will reap the benefits of the lunacy they sow. I don’t care. I hope businesses move out. They’d be wise to do so.

What DOES bother me is this place is a serious disease vector waiting to happen. The rest of us shouldn’t suffer for their stupidity.

San Francisco’s New DA: Public Urination ‘Will Not Be Prosecuted’

“We will not prosecute cases involving quality-of-life crimes.

Right. Instead of finding where he works just piss on his house and his cars. I mean if he’s not going to arrest you for it then he can’t really have a problem with it. People should just follow the dude around pissing everywhere.