BLM labeled nonprofit yet IRS has a blind eye - WHY?

The BLM Global Network Foundation received $77 million in contributions during its 2021 fiscal year, and it ended it with $ 42,000,000 in assets

The “nonprofit” was previously fiscally sponsored and did not have to report to the IRS but broke away into its own legal entity in 2020.

Wallace, who repeatedly has called police “pigs” and said they need to “defund these b—ards,” posted smiling emojis on his Facebook in response to a 2020 article saying, “54 percent of Americans think burning down Minneapolis police precinct was justified after George Floyd’s death.” In 2015, Wallace took to Twitter to say, “F— the police.”

The pro-defunding the police coalition, which is backed by TOP progressives in the “Squad,” sent a text message to supporters last summer saying, “Black August is when we commemorate the lives of our fallen freedom fighters and political prisoners, prisoners of war, and exiles.”

Who are these corporate leaders that donate tens of MILLIONS to this terrorist black group ? And WHY ??? 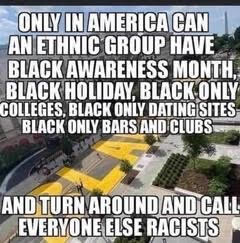 Not bad for a Black Racist organization receiving money from wealthy white people ( George Soros)and other Leftists.
They can escape scrutiny simple because of being a Black organization and the threat of playing the race card and having violent Blacks burning down the country.
No such luck with a White Lives Matter group.

BLM is helpful. They’ve done more to illustrate what a bunch of entitled criminal morons that the vast majority of the black population in America is…than any other group I can think of.

Amazon linked to the BLM Global Network Foundation in a press release June 9, identifying it as among 12 groups that would get a total of $10 million from the online retail giant.

Gatorade , the sports drink maker, identified the BLM Global Network Foundation as being among groups benefiting from a $500,000 donation.

Airbnb Inc . announced on Twitter that the short-term lodging company was splitting a $500,000 donation between the NAACP and the “@Blklivesmatter Foundation

Ritz, the cracker brand from snack manufacturer Nabisco, announced June 4 that it and sister brands were donating $500,000 to the NAACP and to the BLM Global Network Foundation

Dropbox Inc . founder and CEO Drew Houston announced June 3 that he was giving $500,000 to the BLM Global Network Foundation

Cisco identifies @Blklivesmatter, the Twitter handle for the Black Lives Matter Global Network Foundation, as among recipients of $5 million in donations.

Intel , in a May 31 memo from CEO Bob Swan, announced that the business would donate “$1 million in support

Bank of America. On June 2, 2020, they announced a $1 billion , four-year commitment to start programs that focus on helping communities of color address economic and racial inequality.

PepsiCo , they’ve pledged $400 million to a set of initiatives over five years

Comcast is the only company that plans to donate money directly to racial justice organizations, although none of them are Black Lives Matter. The company announced on June 8, 2020 that they’re developing a plan to designate $100 million

On Tuesday, Black Lives Matter Global Foundation’s 990 Tax Form was made public and we were able to get a glimpse into their finances as a 501(c)3 non-profit. From purchasing homes for millions of dollars to paying family members exorbitant amounts of money for arbitrary services , we are left wondering if this organization did the same thing they claim to want to stop, which is exploitation.

WHERE IS THE IRS AND THEIR RULES ??? Could a white group get away with this ???