You graduated on meme degree, and youre entitled to nothing. Even Stem grads struggle to get jobs in and she thinks shes special and demands an answer from her incompetent local government, while they are too busy going after dinosaur statues. Cant afford a home, but I can afford a dog that’ll cost me 10k a year, why am I poor?

Yesica Prado’s graduation stole hangs in her living room like a piece of art.

She graduated from the UC Berkeley Graduate School of Journalism in May and now works as a freelance photographer and writer, reporting on homelessness.

It’s a subject she knows a lot about. She lives in an RV.

Prado left the door of her RV open as she showed me around the West Berkeley neighborhood where she currently lives at Eighth and Harrison streets. She keeps a community box of free clothes, books and food outside her home.

Her dog, Kodak, a black German shepherd she found emaciated in West Oakland in December, panted beside us. Prado, 27, pointed at the RV homes of her neighbors. One, with a red door and bikes leaning against the RV, belongs to a couple with two young children. The children’s grandmother comes to stay every weekend, Prado told me as she picked up a piece of

trash on the sidewalk.

Soon, all of them will have to find a new place to live. I saw more than 10 RVs and vans parked in the area when I met Prado one morning almost two weeks ago. Some nights, there can be more than two dozen.

The city of Berkeley wants to drive them out of town. On Feb. 28, the Berkeley City Council voted to ban RV parking on city streets from 2 to 5 a.m. A second reading of the ordinance is set for Tuesday. The council is also considering a permit process that would allow RVs to park in the city for two weeks a year.

Prado and other RV dwellers have already been kicked out of the Berkeley Marina and the lot of Hs Lordships, a former restaurant on Seawall Drive. Prado’s worried she’ll eventually have nowhere to go if Bay Area cities don’t provide space for mobile homes to park. There are RV parks throughout the Bay Area, but some charge as much as it costs to spend the night in a hotel. Many people who live in RVs can’t afford to pay the parking rates.

“We shouldn’t be (on the streets), because I think there’s families in my community that deserve safe parking spots so their children can go to school,” said Prado, who also works part time at Samy’s Camera in San Francisco.

The parking ban is only for oversize vehicles. Cars and vans will be able to park overnight under the city’s current law that allows vehicles to be parked in one spot for 72 hours. There isn’t an official count of how many people sleep in vehicles in Berkeley, but it’s clear West Berkeley has become an area where RV owners know they can camp. 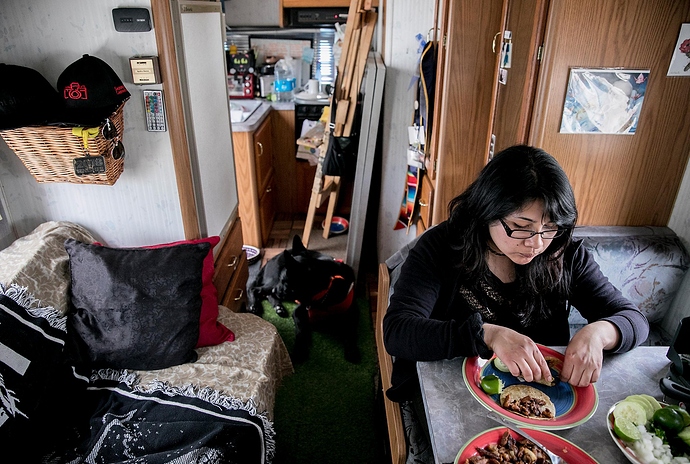 The Berkeley City Council’s crackdown on RV dwellers keeps a photographer and reporter on the move because she can’t afford to rent an apartment.

Why are they hating on RVs though? I think it would be cool to buy a bad ass RV and just work remotely out of that.

I read that some of them don’t even have engines in them. They were purchased by slum lords and placed n the street to rent out.

We are at full employment, she can walk into any credit card call center and get a job that pays enough to afford housing with her college degree in hundreds of locations around the country.

Ahh - that’s just a scumbag move then. The landlords are the ones who should be held accountable though.

Here is the problem with predominantly liberal cities, the wealthy people and trust fund kids who can afford to live there expect a significant range of services to be provided to them. The people who provide those services do actually have to live somewhere. Sure - you can say they can live outside the city - but even those places become just as expensive - if not more expensive - than the city. It’s not a simple problem, that’s for sure.