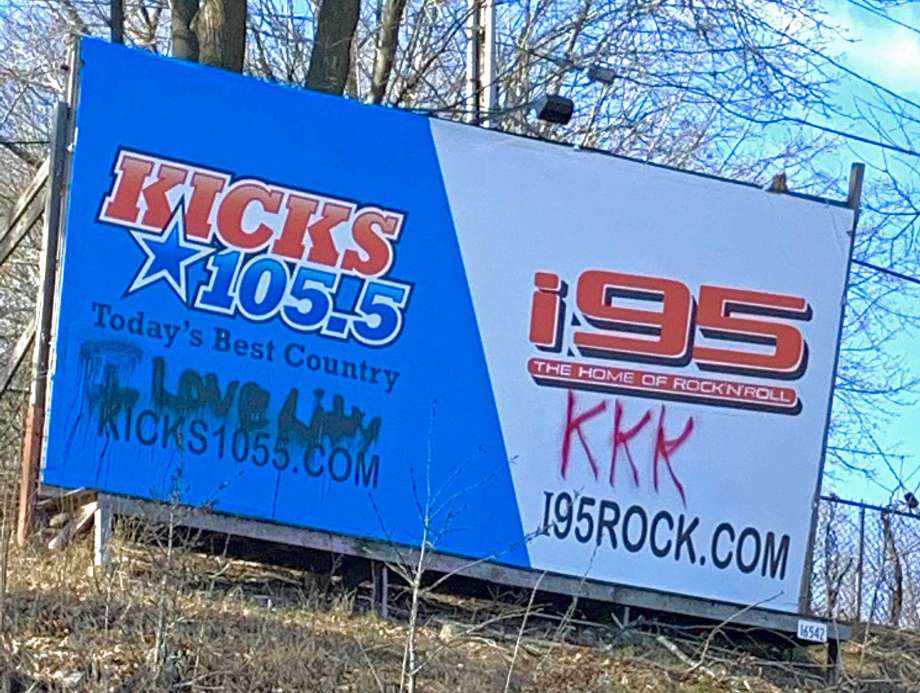 Have you ever noticed these types of things only happen in deep blue states…or in urban areas that are primarily controlled by Democrats? How many times have we all seen the when the person is caught they are rarely ever an evil literal Nazi-Hitler white person?

DANBURY — Hours after the local branch of the NAACP called for immediate action regarding a billboard on North Street with “KKK” spray painted on it, the vandalism was covered up.

On Saturday morning, a Hearst Connecticut Media reader submitted a photo of the billboard on North Street — an advertisement for WDBY and WRKI radio stations — that showed “KKK” written out in red spray paint on the right side of the billboard.

On the left side of the advertisement, black spray paint can also be seen, although it’s difficult to make out exactly what it says.

It’s unclear if both messages were created at the same time or by the same person or persons.

“If the perpetrators are found they will be prosecuted to the full extent of the law,” Boughton said late Saturday afternoon. “There’s no place for this kind of hate in Danbury.”

Glenda Armstrong, president of the Danbury branch of the NAACP, said she hadn’t heard about or seen the spray-painted message, but agreed with Boughton.

“It’s something we can’t tolerate in Danbury,” Armstrong said in a phone interview Saturday night. “I’m glad that the police are investigating.”

Boughton said officials will reach out to the owners of the billboard and “have it removed as soon as possible.”

But Armstrong said around 6 p.m. that the city should intervene now rather than wait for the billboard owners to remove it.

“It’s a public eye sore,” she said, “I would think that there’s something we can do to cover it up … I’m sure it doesn’t represent the greater community and I’m imploring the city to do something as soon as possible.”

By 9 p.m., Boughton said that the vandalism was covered until a permanent fix could be made.

Police officers also canvassed the neighborhood near the billboard Saturday night, knocking on doors and questioning residents to see if anyone had any information about the vandalism.

Danbury has a history of the Ku Klux Klan dating back decades.

In the 1970s, there were race riots at Danbury High School and the KKK orchestrated a cross-burning and handed out racist material at Western Connecticut State University, according to prior reporting by the News-Times.

Many people said in 2012 that fights between black and white students at Danbury High School continued to almost the entire decade.

During the ’70s, the majority of African-Americans lived in the Eden Drive and Laurel Gardens housing projects while many of the city’s white residents lived in the Clapboard Ridge section.

Residents who lived in the city at the time told the News-Times back in 2012 that it “wasn’t the friendliest place for minorities.”

In 1979, when KKK pamphlets were distributed at WestConn, about 400 people — black and white — retaliated with a silent march on Main Street. The NAACP was instrumental in organizing the protest march and was vocal about problems in the 1970s and 1980s.

Members of the KKK told the News-Times in 1982 that they dedicated their cross-burning ceremony on private property on Spruce Mountain Road to Dimples Armstrong, black Danbury science teacher who headed a committee that wrote a teacher’s guide on the KKK. 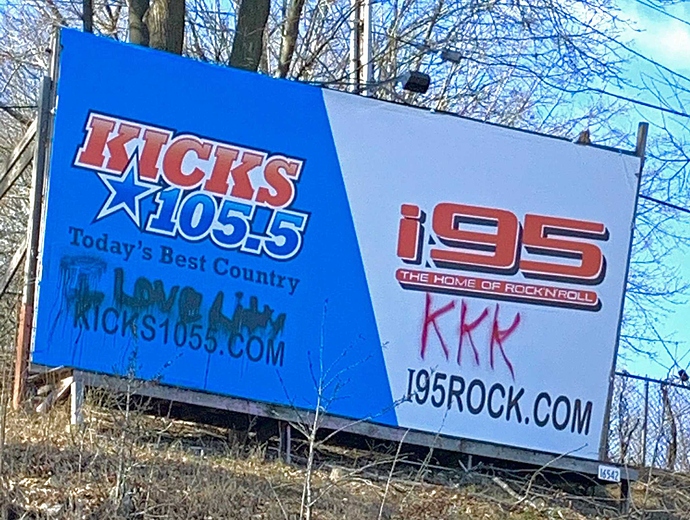 ‘KKK’ on Danbury billboard covered up

After someone spray-painted a billboard in Danbury with "KKK," the city covered it up Saturday night and continued to investigate.

It was on a country music billboard. My money is on a bunch of “woke” black kids trying to stir the pot and piss off white people. What they’re saying is country music is “KKK” - racist. If a group like the KKK wanted to do this and piss off a bunch of blacks they would have gone deep into the hood and went after all of the degenerate rap billboards (if you have ever been deep in the hood they predominantly feature black women in thongs or booty shorts in “twerk” position - so powerful, brave, and uplifting). They would have also likely used custom signs or something a little more high-end than ghetto trash graffiti. I hope the mayor of this shithole is canvassing the hood. Da’Kwon and T’yre’e$se need to know that “there’s no place for this kind of hate in Danbury”

But Armstrong said around 6 p.m. that the city should intervene now rather than wait for the billboard owners to remove it.

By 9 p.m., Boughton said that the vandalism was covered until a permanent fix could be made.

So the city decided to take it upon itself to also trespass on private property and further vandalize a sign that did not belong to them. The owners of the sign should sue the city into oblivion, but of course that won’t happen. The city had no right to take any action on the sign.

Yeah. This was targeted at WHITE PEOPLE who listen to country and rock music.

I also like how this “news article” stretches to absurd levels to try to connect events from 40 years ago to this bullshit.

This article is desperately trying to make it appear as if there is a resurgent Ku Klux Klan in this area of Connecticut. Journalism is dead.

I don’t know if it’s a hate hoax but the article certainly has an agenda and paints the situation in a very specific way - that the KKK put graffiti on a country music sign. I agree with what others have said here. When I first looked at the picture it struck me as someone sending a message to people who listen to that type of music. It sure would be nice if journalists would actually do some independent thinking and just present the facts as they are instead of trying to make it about something it clearly isn’t.

If any of us would do this , it would definitely be a hate crime and racist.If caught we would endure years of diversity and sensitivity training along with our reputations smeared.

The pageantry of absolute cucks continues as expected. 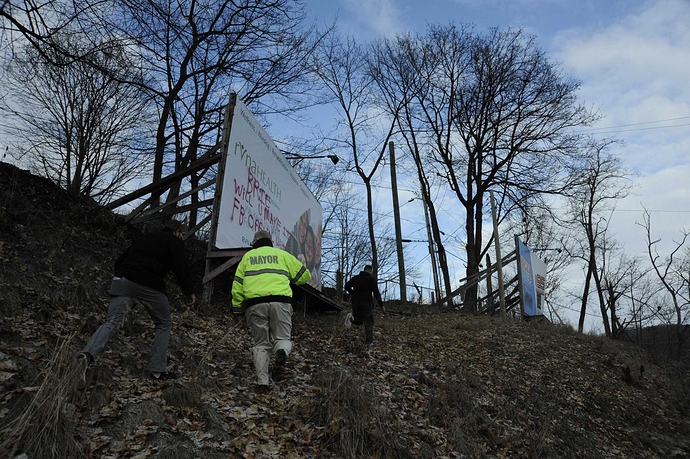 "It's not something that we want to be associated with or tolerate, the mayor is here because the city won't tolerate it," said Lou Milano, a radio personality for WRKI radio.