And just before the Georgia action: # Georgia Poll Workers Who Raised Election Concerns Get Terminated

Poll workers in Georgiawho raised concerns about election irregularities were informed this week that their contracts are not being renewed, according to letters obtained by Epoch Media Group.

Bridget Thorne and Susan Voyles say they witnessed abnormal actions taken during the election in Fulton County. They’ve spoken to news outlets and state legislators about what they saw.

In the new letters, Dwight Brower, elections consultant for the Fulton County Department of Registration and Elections, informs the women that Georgia law enables officials to appoint poll managers, and managers must be reappointed for each election event.

“There are many factors (management skills, performance, actions, behavior, etc.) considered prior to making reappointments for each primary or election. Unfortunately, a decision has been made to not reappoint you in a poll management or other poll positions in Fulton County,” Brower wrote.

“I see it as a direct consequence of my being honest,” Voyles told NTD, which is part of Epoch Media Group.

“In that oath, we say that I will, to the best of my abilities, make sure there is no fraud, deceit—it kind of goes on down like this,” Voyles added. “So I saw what I was doing was an extension of my job as a poll manager. In other words, I had seen fraud I had seen deceit, I had seen the things that in our poll reading we were warned to stay away from and to report if we see them. I did, and in this case, at this point, the truth was not received well.”

A Fulton County spokeswoman didn’t respond to requests for comment.

“It’s a tremendous concern, not just for me, but for all the voters in the state of Georgia who are informed about this situation. Because basically, these whistleblowers, who are trying to correct the fraud in Fulton County, have now been terminated,” he said. “And the people who actually appear to have committed the fraud on election night, by illegally scanning 20,000 ballots into the Fulton County system after they told the monitors that we’re not going to scan anymore, those people appear to still be able to count the votes for the upcoming U.S. Senate race. So everyone is asking, ‘Why?’”

Secretary of State Brad Raffensperger said in a statement on Friday that Fulton County should rehire Voyles and Thorne.

“I condemn in the strongest terms the decision by Fulton County elections officials to fire two poll managers purely for raising concerns about the November elections,” the Republican said. “Though we have found no credible evidence of widespread fraud, it is important that individuals can raise their voice when they believe they have seen wrongdoing. Retribution against whistle blowers poses a threat to the continued strength and vibrancy of our democracy.”

Voyles said in her affidavitand subsequent testimony to state lawmakersduring a public hearing on the election that she found a batch of “pristine” ballots that were all marked exactly the same. She said approximately 98 percent of that batch were for Democratic presidential nominee Joe Biden.

“In my 20 years’ of experience of handling ballots,” she said, “I observed that the markings for the candidates on these ballots were unusually uniform, perhaps even with a ballot-marking device.”

Thorne told NTD earlier this month that she saw the ballots from early voting dumped in the election warehouse in Fulton County.

“Being a precinct manager, it was just upsetting just to see people dumping these ballots out into suitcases and there was no security. There was no chain of command,” she said. “I could have walked out of the building with a whole suitcase of ballots if I wanted to. There was nobody holding me accountable.”

“And I just realized, anybody could print any kind of ballot they wanted here, they had access,” she added.

They’re among a number of witnesses who have said they saw irregularities unfold before, during, and after the election.

Carlos Silva, a registered Democrat, and Robin Hall said in affidavitsthat they saw ballots similar to the batch Voyles talked about. Silva and two others said they saw ballots cast for Trump being placed in stacks for Biden.

“I noticed they all had a perfect black bubble and all were Biden select,” Silva wrote in a sworn affidavit. “I heard them go through the stack and call out Biden’s name over 500 times in a row.”

And Debbie Fisher, a poll observer in Cobb County, told NTD that she saw people enter the precinct at a library and receive absentee ballots, which are supposed to be sent by mail.

“They merely filled out an affidavit saying they had not voted and then they were allowed to vote like everyone else,” Fisher said.

Georgia officials have insisted the election was run smoothly, even as they misrepresented a supposed burst pipe on Election Day and reported thousands of new ballots, mostly for President Donald Trump, during a hand audit. They have also challenged accusations surrounding video footagethat showed ballot counting observers and media leave State Farm Arena on election night, and workers resume counting with no oversight.

Officials announced this weekthey’d conduct a statewide signature audit to try to restore faith in the election process.

“Frankly, there’s been no investigatory rationale for it. At this point, it has become such a drumbeat of disinformation, we now feel obligated to restore confidence in the process by doing it,” Gabriel Sterling, voting systems implementation manager for the Secretary of State’s office, told reporters.

Even as they’ve defended the election, state officials have targeted Fulton County.

Fulton County Board of Commissioners Chairman Rob Pitts told reporters at State Farm Center that he’s “still not clear as to why” officials like Raffensperger “continue to pick on Fulton County, Georgia.”

“We’re the largest county in the state of Georgia, the largest of 159. I cannot speak to what the other 158 counties in Georgia are doing. But I can tell you beyond a shadow of a doubt that within Fulton County, Georgia, there was no hanky panky whatsoever with respect to the recent election, zero,” he said.

Ivan Pentchoukov and NTD’s Cindy Drukier and Melina Wisecup contributed to this report.

And the see ya later: 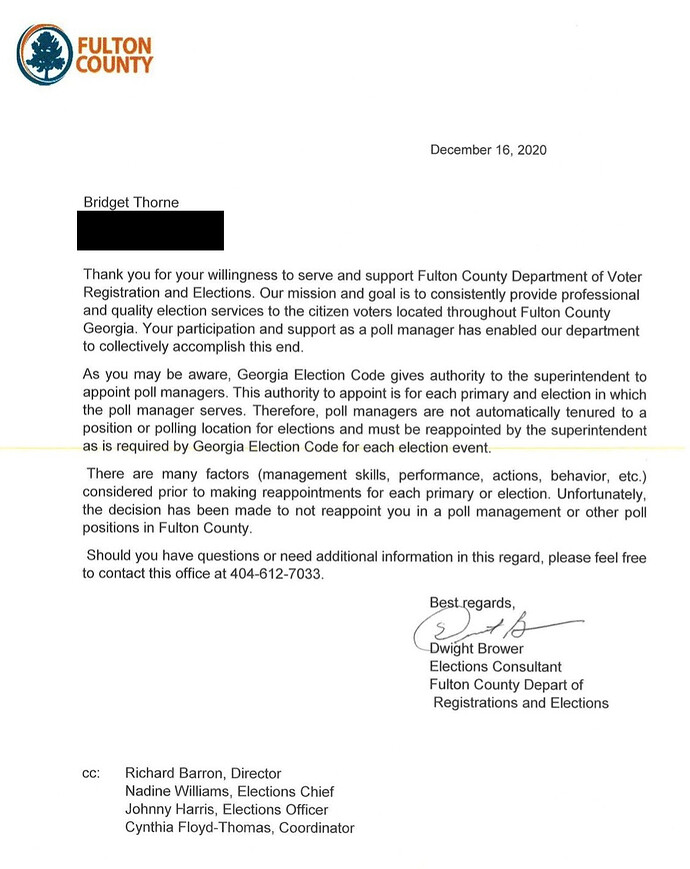 I’m shocked…lol. If you’re like me, you have already conceded that Joe dips**t Biden will be the next POTUS. He lost big time, but that doesn’t matter. The Left did a fabulous job of pulling off the scam of the decades.

I’m going to just sit back and watch the mayhem unfold. Biden’s own party is already throwing a hissy fit about his cabinet picks. AOC and Bernie are talking s**t … this is going to be awesome entertainment…lol.

There has been no fraud proven, 60 Trump lawsuits tossed, with plenty of the judges being conservative Republican appointed, and a couple of them even Trump appointees. Republican controlled states have certified Biden wins despite Trump’s frivolous claims of fraud. Trump’s own administration has investigated and found no fraud, his DHS and the man he appointed to CISA tell us that this was the most secure election in US election history. The Supreme Court has tossed his bullshit, all 50 states have certified their votes with Biden winning the EC by 74 and the electoral college, to a person, has affirmed Biden’s 306 EC votes. Mitch McConnell has acknowledged and congratulated Biden…

But alas, there is no conspiracy. Biden won, and Trump is going home…

Biden said it and it was an early preview of what was to come.

Every thought it was another not of dementia but clearly he was telling the truth.

Buckle up buttercup, what the left did the right can improve and make it better.