About Mexico and COVID-19

Mexico might be the next wave of COVID-19, and if the pattern we’ve experienced here, along with Italy, Spain, and China, holds, it’s a fairly good bet they’re going to have trouble.

President Trump will soon unveil an executive order halting practically all immigration. This is likely to unleash some serious court challenges, though the U.S. Supreme Court has ruled on his previous bans in a manner favorable to the administration. But if you factor in where many immigrants (legal, illegal, both) may come in to the U.S., shutting down legal immigration for a time may be a sensible move.

The border between the U.S. and Mexico is still closed, but Mexico, despite initially ignoring coronavirus warnings, is now poised to hit the massive growth in cases seen elsewhere.

The government is predicting that the virus will spread rapidly in the first half of May and that pressure on the health system will be greatest in the second half of next month.

The government’s social distancing initiative, including the suspension of all nonessential activities, is currently scheduled to run through May 30. Specific measures and restrictions applicable to phase three of the pandemic will be published in the government’s official gazette on Tuesday afternoon.

The phase three declaration comes after the Health Ministry reported on Monday that the number of confirmed Covid-19 cases had increased by 511 to 8,772 and that the death toll had risen by 26 to 712. 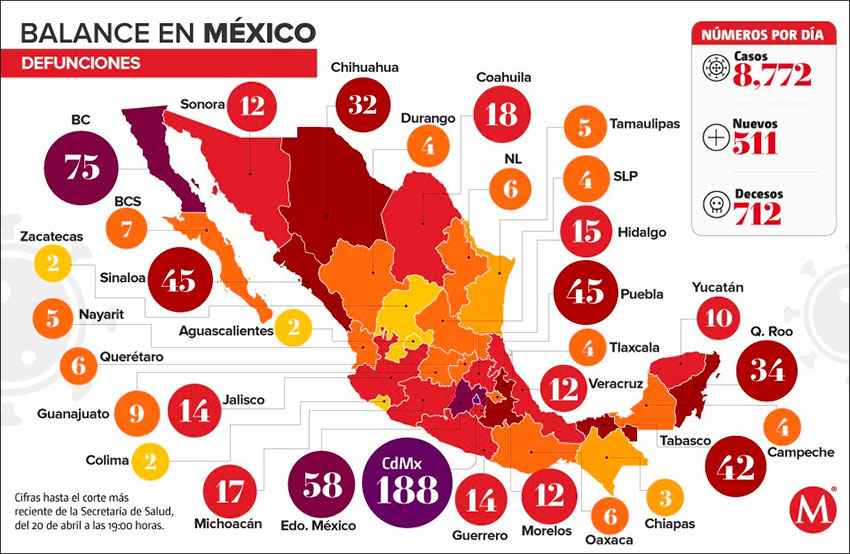 Hindsight and additional knowledge may point to an earlier start for spreading of the virus in the U.S. than previously believed. The border was closed on March 20, and now we believe the earliest COVID-19 deaths in the U.S. happened on February 6 and February 17, in Santa Clara County, California–not Washington State.

This means the U.S.-Mexico border was open for weeks while the virus may have been spreading on the west coast. This “crypto” spread, followed by a massive outbreak, seems to be the pattern worldwide.

If that’s true, then Mexico is very much in for a terrible time. Mexico City’s government has prepared by making an app available to citizens to inform them of hospital locations and bed counts in real time. In addition to that, web-based and text-response-based questionnaires are available to help potential victims receive an evaluation.

The IHME model doesn’t have any data on Mexico, so I don’t have any predictions to make. But the security of our southern border may be the next “big story” if COVID-19 does in Mexico City–with a population of 22 million–what it did in New York City, except many times worse.

The resulting flood of immigrants trying to get to the U.S. for treatment, or to escape conditions in Mexico could overwhelm our border forces, and then overwhelm our healthcare system just as many places are beginning to open up.

We need to watch our border closely, and be very much involved in helping Mexico through what many of us are currently experiencing.