A Radical Plan for Trump’s Second Term is being Hatched

This is a good deep dive and read on what to expect should Trump win a second term to occupying the White House. Axios who wrote the article below, is noted to be freaking out over what it deems as a radical plan to reshaping America with Trump appointed people who are not only loyal to him but the American First agenda. A lot of interesting tidbits to consider which if successful will be quite remarkably different. Such as cleaning house at the DOJ, FBI, the Pentagon, State department and firing tens of thousands of career bureaucrats that have mostly obstructed Trumps agenda during his first term in office.

By then the likes of Nancy Pelosi and others will be gone from power but not from public scrutiny should the new administration decide to go after her and others like Schiff on legal grounds. The latter of course would remain to be seen, but what is clear there is a war currently being fought and we should expect a lot to happen between now and the running up to the presidential elections in 2024 where Democrats will expected to be playing dirty as we already know they are capable of doing so be prepared is the best defense for offense. 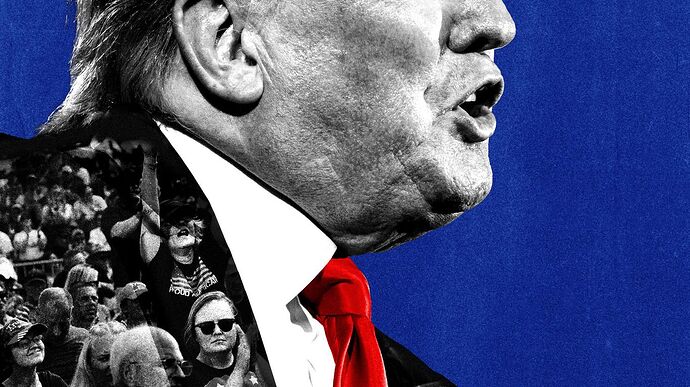 Inside Trump '25: A radical plan for Trump’s second term

Allies want to empower him to purge potentially thousands of civil servants.

I’m not about to read through all that. I’ll take the America first approach every time. If Trump is the candidate… I WILL vote for him.

I’m not about to read through all that.

Well in your spare time, you might find reading it a very interesting and informative read. Everything that is going on both in this administration and around the world where WEF candidates are trying to subvert their country’s agenda, America is the last bastion of free will and free people who are fighting for the right to determine their destinies. Whether its Trump or some other candidate who is willing to take up the mantle of “America First” agenda is essential to not only defeating the Globalist cabal of the WEF, but putting things back into place to having once again a functioning republic where the rule of law is restored. Therefore on that basis alone, this fight is going to get more intense with false flags, Gun rights, Border invasions and destroying and weakening both our military and economy which is their continued playbook. Wait for the next plandemic in order to assert their control and implement more chaos. They’ve already lost on the narrative of COVID-19 now its Climate emergencies to broaden their will to control. Look to the usual suspects.

I will read it all the way through when I have some time. I skimmed through it quickly. I can’t say I picked up on anything radical about it, but I’m sure some would disagree.

From what I picked up from glancing through it, it seems Trump is still all about Trump…lol. I understand his need / want for loyalty, but this is politics… good luck. Trump is Trump’s worst enemy. He is never going to be anything other than what he is. I’m not against another 4 years of him, even if I don’t like him. The political landscape of the world right now requires a strong, defiant asshole in the white House that has America first as his agenda.

I don’t like Trump. I did like what he did for the country, the company I worked for and myself. It’s been a total shit show / disaster since the election was stolen… and it was stolen; I will never be convinced otherwise.

I don’t like Trump. I did like what he did for the country, the company I worked for and myself. It’s been a total shit show / disaster since the election was stolen… and it was stolen; I will never be convinced otherwise.

Totally agree. If he runs then I will support him, but to be honest I think someone like DeSantis is more my cup of tea, but who knows how this will shake out. We live in precarious times as a nation and like you said its going to take a defiant persona to overcome the Globalist cabal and cleanse the rot and decay that is from within. From the sounds of what the article is projecting Trump’s second term is strictly focused on Domestic and cultural issues something that the left has been winning at for quite some time, so from Axio’s perspective a lot of what they have planned would seem radical.

On the stolen election part, I am not sure how that is going to play out in terms of addressing the issue of stolen elections, and I am with you that I am convinced like many others such as yourself who believe that. Hell, just look what is going on in Georgia and the rest of the political class with the insider trading and getting rich with mined data of private citizens and Government money laundering, its enough to make one sick. On the latter, its poignant because same thing happened to Rome under Nero before the entire shit show went up in flames. History doesn’t repeat it rhymes.